It’s hard to justify Workhorse’s (WKHS) current ~$3 billion valuation, considering that the Street expects the company to make less than $150 million in revenues next fiscal year. The major reason why the stock trades so high is due to the fact that the company might win some portion of USPS’s $6.3 billion contract to deliver its EV trucks to the country’s biggest postal service. Other than that, we don’t see any other reason to justify Workhorse’s recent share price appreciation. In addition, the lack of capacity to manufacture trucks at scale on its own is likely going to hurt the company’s margins even if it wins the contract. Considering this, we believe that Workhorse is overvalued.

By being a pioneer of the EV business, Workhorse worked on various electrification projects with General Motors (GM) and Mercedes for more than a decade and only later decided to sell its own EV vehicles under its brand name. Currently, the company has slightly more than 100 employees and it’s on track to deliver up to 400 C-Series EV trucks by the end of 2020.

Earlier this year, Workhorse benefited from the injection of liquidity to the markets by the Fed, as stocks managed to quickly recover from their March lows and reached new all-time highs shortly thereafter. By being an EV company, Workhorse’s stock followed the upside trend of other stocks like Tesla (TSLA), Nikola (NKLA), and NIO (NIO) and quickly appreciated and reached its own all-time high. In addition, the company was able to keep its momentum by reaching the final stage of the bidding process for USPS’s $6.3 billion contract to manufacture vans for the postal service.

While Workhorse’s growth prospects look good, its financials are not as impressive as some might think. In Q2, Workhorse’s net loss widened to $131.3 million from a net loss of $20 million a year ago. Nevertheless, despite the increase of losses and interest expenses, Workhorse’s stock managed to show an outstanding performance in recent months, especially if compared to the performance of the S&P 500. 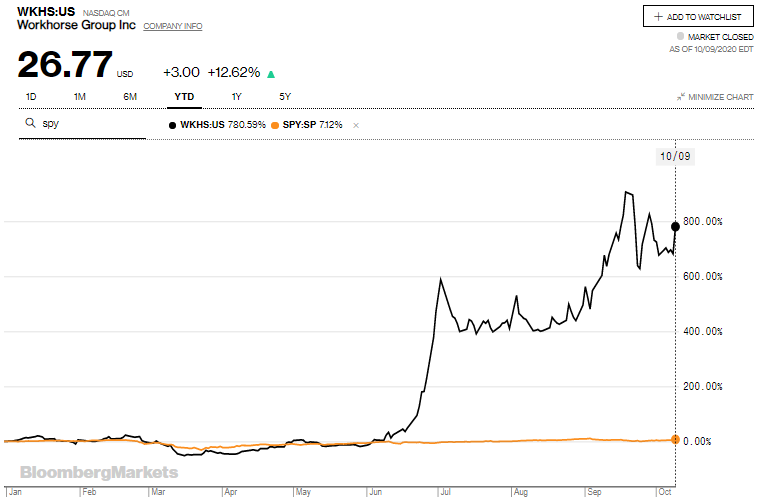 Despite such a rise of the share price in recent months, it’s hard to call Workhorse a solid company. While Workhorse has slightly above $100 million in liquidity, it’s unable to become profitable and generate positive FCF after being in business for over two decades already. While in order to stay afloat Workhorse managed to secure $70 million in exchange for convertible notes earlier this year, it’s very likely that it will continue to increase its debt burden and dilute its existing shareholders in the following months, since its margins will continue to stay in negative territory.

In addition, despite pivoting to the manufacturing of commercial vehicles a long time ago, Workhorse still didn’t enter the commercialization stage, even though it has been a public company longer than Tesla. The biggest problem of Workhorse at this stage is that it doesn’t have a unique business model and it will soon compete in a saturated environment. As the popularity of electric vehicles increases and the market starts to mature, more and more competition will start to enter the space and scale the production of their own EV trucks. The reality is that by outsourcing lots of tasks and having a limited capacity to manufacture trucks, Workhorse doesn’t have any pricing advantage that could’ve improved its investment attractiveness. If legacy carmakers along with Tesla decide to enter the EV vans market, then it will be hard for Workhorse to compete with them considering that it operates with negative margins even now, when the competition is scarce.

While the possible USPS order is certainly a major driver of growth for Workhorse’s stock, there’s no guarantee that the company will be able to win the whole $6.3 billion contract on its own or even win some portion of the contract at all despite being in the final stage of the bidding process. As a result, there’s a risk that its stock will tumble in the near-term, especially if we take into consideration the ability of Workhorse’s vertically integrated competitors to develop their own version of EV vans for USPS if needed. In recent days, two contradicting reports surfaced regarding the company’s chances to win the contract. With so much uncertainty in the air right now, we believe that Workhorse is not a good investment for risk-averse value investors. One thing that’s certain is that even if Workhorse somehow wins some portion of the contract, its lack of capacity to build a high number of vans on its own will deteriorate its future margins.

Considering all of this, it’s safe to say that Workhorse is a gambling stock, which could go in both directions in the short term, but will likely tumble in the long term due to its weak financial position and the inability to substantially scale its operations. With a market cap of nearly $3 billion and projected revenue of less than $150 million in 2021, it’s safe to say that Workhorse’s current price is unjustified and its stock is overvalued.