The ultimate fate of Transocean (RIG) shareholders may be determined in the next two months. That determination may have little to do with the economy or supply and demand in the off-shore drilling market. Instead, it will depend on legal analysis of a few indenture provisions.

This is the situation Transocean finds itself in after entering into exchange transactions to reduce its outstanding debt amount and extend its debt maturities in an effort to stave off bankruptcy. In response to the exchange offer, Whitebox Advisors LLC and other owners of Transocean’s so-called “priority guarantee notes,” which are structurally senior to the company’s other unsecured notes, have sued Transocean to challenge the consummation of the exchange offer, arguing that the exchange offer, and the reorganization necessary for it, constitute a default under the indentures governing the priority guarantee notes.

Transocean has requested that the court hear its motion for summary judgment prior to December 1, 2020, which is the date that the cure period for the alleged default would expire. The challenging funds own more than 25% of one of the series of notes, the threshold for accelerating upon an Event of Default. These funds have delivered Transocean a notice that would automatically accelerate if the alleged default is not cured by December 1st, which is the end of the cure period. As a practical matter, Transocean cannot cure the alleged default as that would require undoing the exchange transaction. As such, Transocean’s only hope of avoiding bankruptcy at this stage is either (i) to win summary judgment from the court denying Whitebox’s claim that the transaction constituted a default or (ii) settle with the funds, in each case prior to December 1st.

The actual claim of default is quite interesting. Whitebox claims that Transocean violated a provision in the indenture of two series of the priority guaranteed notes (the 2025 notes and the 2027 notes) when it changed its corporate structure in order to be able to offer structural seniority to exchanging noteholders in the exchange offer. Below is Transocean’s corporate structure prior to the exchange offer reorganization transactions: 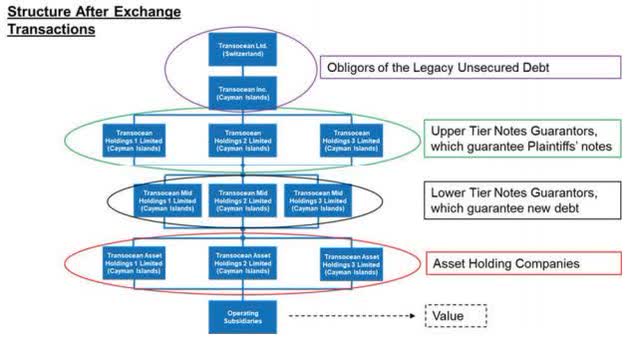 Whitebox’s core claim is that a provision of the indenture of the 2025 and 2027 notes requires the new Lower Tier Notes Guarantors to guarantee the existing priority notes. The provision (which I will call the “successor liability covenant”) reads:

Whitebox argues in its complaint that “this provision was designed to prevent precisely the subordination that defendants have attempted to orchestrate in the series of transactions leading up to the exchange offer.”

Transocean responds with several arguments from its brief. I’ll discuss what I consider the weakest first.

1. No Transfer of All or Substantially All of the Upper Tier Notes Guarantors’ Assets

Whitebox is not attempting to prevent the transfer of all or substantially all of the assets of the Upper Tier Notes Guarantors. It is merely arguing that the indentures require the Lower Tier Notes Guarantors to provide a guarantee to the existing priority guaranteed notes if they do so. I find that to be a more compelling position. The successor liability covenant is not meant to prevent the company from changing its corporate structure; it is meant to require the company to issue a guarantee to the existing priority notes if the assets are transferred so that the existing priority notes maintain their priority.

2. The Transfer of Assets is Less than 5% of the Company’s Assets

I find this to be a very poor argument for two reasons. First, the “transfer” at issue was the internal reorganization transaction, not the issuance of the new notes. So the comparison doesn’t make sense. Second, everyone knows that Transocean’s assets are not actually worth $22 billion, an absurd number in today’s environment, and in any case, the net asset value (net of debt) seems more relevant than a gross asset number.

Transocean argues that the debt covenant in Section 4.04 of the 2027 indenture expressly permits it to incur up to $2.4 billion of debt under Credit Facilities (“Credit Facilities” is defined to include “notes”), which can be structurally senior to the existing priority guaranteed notes. Transocean discloses that it has only incurred $925 million under this basket (it is unclear as of what date), leaving sufficient room for the new exchange notes to fall under this basket. Whitebox presumably does not contest Transocean’s ability to incur senior debt under this basket.

Transocean further argues that Whitebox’s “interpretation of the 2027 indenture would render the key senior debt basket provision meaningless, in violation of established rules of contract construction.” That is because, without the ability to do the internal reorganization and insert the Lower Tier Notes Guarantors into the capital structure, Transocean would not be able to issue the structurally senior debt that it is entitled to under Section 4.04. The argument is, essentially, that the “successor liability” covenant is mere boilerplate and should not be read to limit the company’s explicit rights to the debt basket in Section 4.04.

My first comment on the argument is that, as a technical matter, Transocean is not correct that Whitebox’s interpretation of the “successor liability” covenant renders the senior debt basket meaningless. Whitebox’s interpretation does not limit Transocean’s ability to increase its RCF or issue bank debt under the senior debt basket because those transactions would not involve the corporate reorganization. In fact, the Whitebox interpretation doesn’t even limit Transocean’s ability to execute the corporate reorganization; it simply requires that the new intermediate holdcos issue a guarantee for the existing priority notes. If I had to guess, I would think a judge would side with Whitebox on this argument. Transocean is simply making an unsupportable case by arguing that Whitebox’s interpretation of the “successor liability” provision renders the senior debt basket moot.

That being said, it is also possible that the judge will take a “substance over form” approach to the dispute, recognizing that Transocean has capacity to issue senior debt under the senior debt basket, and not be willing to stop the exchange transactions based on the somewhat boilerplate “successor liability” provision. Transocean could undoubtedly raise more senior debt by drawing additional amounts under the RCF, which is senior to the priority guaranteed notes, so what difference does it really make that the company chose to structure the new senior debt as new exchange notes under a reorganized structure? In both cases, the additional debt is senior to the existing priority guaranteed notes.

At this point, my view is that it is more likely than not that Whitebox wins based on the technical reading of the indenture. Its reading of the successor liability covenant is correct, in my opinion, and Transocean’s arguments miss the mark. That said, a court could easily take a “substance over form” approach and side with Transocean. If I had to guess – and it’s just a guess – I’d say Whitebox is more likely than not to win, but not by much. If Transocean starts to believe that is the eventual outcome, it will either file bankruptcy or make efforts to settle with the noteholders, if that is possible. In any case, it will be an interesting two months ahead.

Disclosure: I/we have no positions in any stocks mentioned, but may initiate a short position in RIG over the next 72 hours. I wrote this article myself, and it expresses my own opinions. I am not receiving compensation for it (other than from Seeking Alpha). I have no business relationship with any company whose stock is mentioned in this article.