The Trade Balance, The U.S. Dollar, And The Economy: Not Good News

The US trade deficit in September was the widest it had been in 14 years.

“America’s trade war with the world limited the trade deficit red ink for a time but it now looks like the terms of trade are changing back despite the tariffs and sanctions of the country will likely remain dependent on foreign goods for years to come, no matter who is president.”

In other words, president Trump’s vow to sharply cut the US trade deficit has not been achieved.

This now fits into the hole that the Covid-19 pandemic is digging for the world. 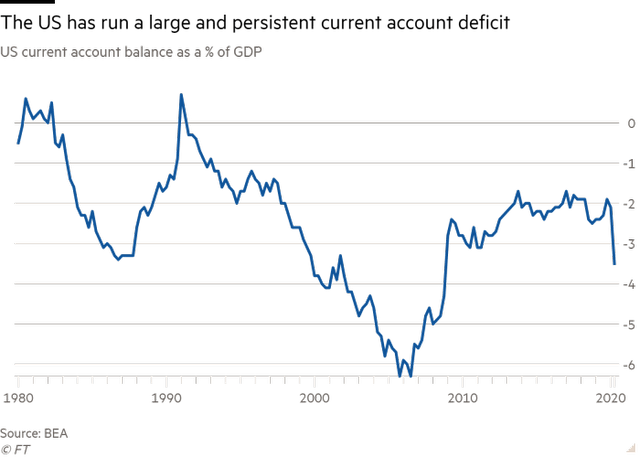 The Value Of The Dollar

As I have reported recently, this is not good news for the value of the U. S. dollar.

Tie this continued drop in the with the decline into negative territory in net savings in the U. S. in the second quarter and you end up with the fact that the rising government debt is going to have to rely more and more on foreign lenders to support the burgeoning Treasury deficits.

That is, the value of the dollar will be under substantial pressure.

The dollar has been dropping in value this year. It reached a near term peak in strength on March 19, as the U. S. Dollar Index (DXY) closed at 102.82.

My expectation is that the value of the dollar will continue to decline over for some time now. One reason is the weakness of the U. S. economy and the fact that growth will remain modest for an extended period of time.

A second reason for this is that the Federal Reserve is now following a policy stance that foresees little or no increase in U. S. interest rates for quite some time, possibly two to three years.

Stephen Roach, of Yale University and formerly from Morgan Stanley, has even predicted that the dollar may fall by as much as 35 percent.

Mr. Rupkey’s dire picture of the trade situation, mentioned above, only reinforces the belief that the decline in the dollar will not be minimal.

Can This Situation Continue?

One does not see this situation changing much in the future.

And, this is what the president taking office on January 20, 2021 will face. Regardless of who this president is, attention is going to have to be given to the fact that the United States economy is going to need to be restructured.

No matter what is being promised right now in this election campaign, the future is going to be dominated by the fact that the world has changed and new thinking is going to have to take over.

I have used the phrase “radical uncertainty” a lot recently. I must admit that I have taken this phrase from the book by the former chairman of the Bank of England, Mervyn King and former Financial Times columnist, John Kay. The title of the book is “Radical Uncertainty: Decision-Making Beyond the Numbers.”

In a world of radical uncertainty, we not only do not know what the probabilities of possible outcomes might be in the future, we do not even know all the possible outcomes that could occur. In other words, there are a lot of unknown, unknowns.

How does one invest in such a situation?

Well, one must be careful. For a time, the old rules are not going to apply. Furthermore, a wider separation is going to take place between the “legacy” firms, the organizations that still maintain the “old” structure and vision, and the “new” Modern Corporations, the organizations that are created to exist and prosper in the evolving world. And, this applies to the financial world, just as it does to the manufacturing world.

But, as one can imagine, working this out is all going to take a lot of time. After all, there are a lot of unknown, unknowns out there. There is so little an investor can predict when the world is in a state like it is right now. And, in my opinion, we are just at the beginning of this period, which means that there is an awful lot we must go through.