There is currently much hope for another fiscal stimulus package to be delivered to the economy from Congress. While President Trump recently doused hopes of a quick passage, there a demand for more stimulus by both parties. While most hope more stimulus will cure the economy’s ills, it will likely disappoint due to the “2nd derivative effect.”

In March, as the economy shut down due to the pandemic, the Federal Reserve leaped into action to flood the system with liquidity. At the same time, Congress passed a massive fiscal stimulus bill that expanded Unemployment Benefits and sent checks directly to households. As shown in the chart below of the upcoming expected GDP report, it worked. (We estimated GDP to increase by 30% from the previous quarter.) 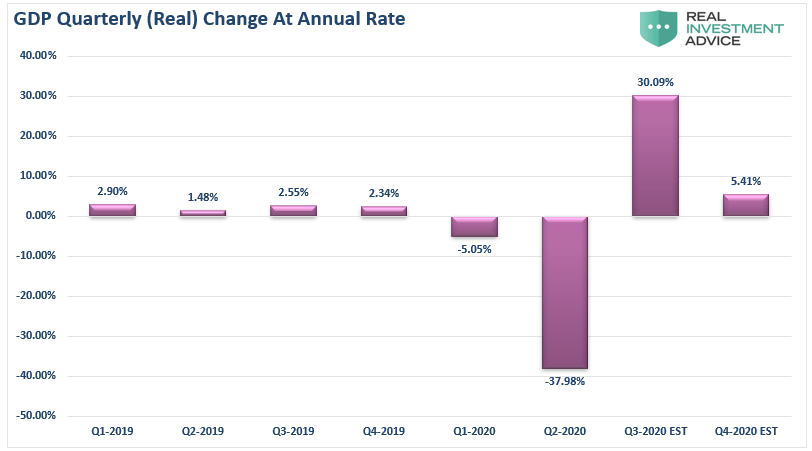 That expected 30% surge in the third quarter, and surging stock market to boot, directly responded to both the fiscal and monetary stimulus supplied. The chart below adds the percentage change in federal expenditures to the chart for comparison.

Those are the facts as published by the Federal Reserve. From this point forward, we have to start making some estimates and assumptions.

During Q3 2020, not much happened as the government was fighting over the next round of stimulus. As such, spending fell back to a more normal level of increase. However, if we assume that a second CARES Act is passed some time in Q4, and we apply