Stocks have mostly shrugged off news that President Donald Trump tested positive for COVID-19. Markets started down, but had recovered by midday trading. (Oct. 2)

Stock futures rose more than 100 points Sunday after reports that President Trump continued to improve over the weekend in his battle against COVID-19 and could be discharged from the hospital as early as Monday.

Dow Jones industrial average futures were up about 140 points while Standard & Poor’s 500 futures rose about 17 points early Sunday evening as both indices advanced nearly half a percentage point. Futures trading attempts to predict how the market will move when it opens the next trading day.

The Dow tumbled more than 400 points in early trading Friday on news of Trump’s diagnosis but pared those losses after reports that negotiations over a stimulus package stalled in Congress had gained more urgency. The blue-chip index closed down about 134 points Friday at 27,682  while the S&P 500 fell 1%.

No significant progress in the negotiations emerged over the weekend. But, in a tweet, Trump called on lawmakers to iron out their differences. That could have helped lift stock futures Sunday, says Chris Zaccarelli, chief investment officer at Investment Advisor Alliance.

“OUR GREAT USA WANTS & NEEDS STIMULUS. WORK TOGETHER AND GET IT DONE,” Trump tweeted Saturday. “Thank you!”

Both Detrick and Zaccarelli expect more market volatility in coming days and weeks both on news of Trump’s fight with a disease that can take sudden turns, and developments related to the stimulus, which likely would provide more relief to millions of unemployed Americans and struggling businesses.

Presidential health chatter: ‘Trying to reflect the upbeat attitude’: How transparent does the president’s doctor need to be?

The analysts say the market gyrations largely center on the uncertainty caused by an illness that could threaten Trump’s life. Detrick says a prolonged bout with COVID-19 may raise the possibility of delaying the election, while Zaccarelli says it forces investor to weigh a scenario that elevates Vice President Mike Pence to the presidency.

Trump, wearing a suit and a mask, waved to supporters Sunday from the back seat of an SUV as it passed by a demonstration at the Walter Reed medical center. 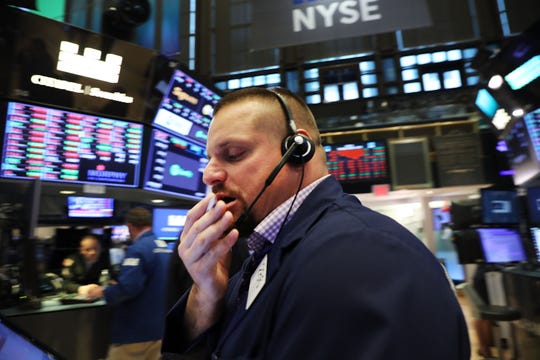