U.K. building materials supplier SIG (OTC:SIIGY) has had a rough year, with a management change and equity raise to shore up its finances. In SIG Plc: Low Price But High Risk I assessed that the turnaround challenges it faces are significant and it is not investable with confidence until there is clear evidence of a sustained turnaround. That investment thesis remains intact, with the newly released half year results not yet providing strong evidence of a sustained turnaround. Continue to avoid.

The Company Swung to a Loss and Scrapped the Interim Dividend

The first half was heavily impacted by the lockdown and building restrictions, which subdued demand across the building supplies trade as most workmen downed tools for several months. So it was no surprise that there was a sharp fall in revenue versus the comparative six-month period the year before.

Given the costs incurred over lockdown and dealing with the impacts of COVID-19, it is also no surprise that the company fell to a loss. It is worth noting that the loss was sizeable. At 9.1p per share at the basic level, and shares trading at 24.1p, the loss in this six month period was equivalent to over a third of market cap. 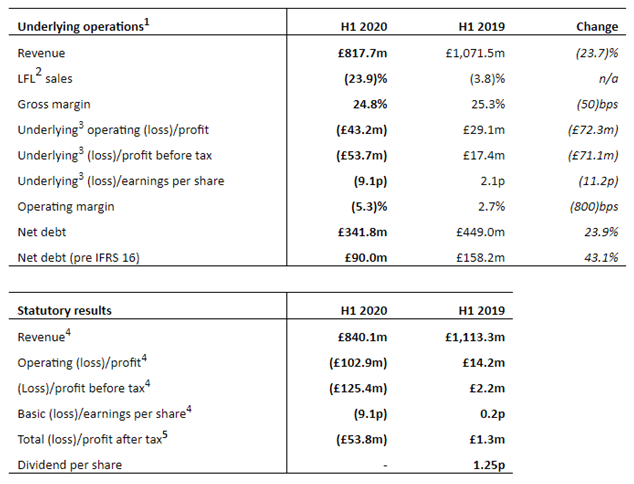 Given those results, and the need for cash as shown by the capital raise, it is no surprise that the interim dividend was axed. That followed in the footsteps of the final dividend, which was axed earlier in the year.

Realistically, it is hard to see the dividend being restored any time soon. The company continues to experience turbulence in its markets and is seeking to rebuild its financial base. So dividends will likely be a low priority in the coming year, if not longer. Indeed, the company itself signaled in the half year results that under the terms of its amended debt arrangements, a final dividend will not be declared. Although I am unaware of what exactly those debt arrangements are vis-à-vis dividends, clearly for the short- to mid-term future, dividend payouts should not form part of the basis of the investment case for SIG shares.

Trading Should Improve But a Second Half Loss is Predicted

Building works have mostly resumed in the U.K. and other markets. Indeed, even in the first half, the worst performing Continental European market (France, where sales fell 14.5% on a like for like basis) delivered much better results than the businesses in the British Isles.

Additionally, although in the U.K. at least here have been a second round of restrictions announced, I am struggling to imagine that most sites nationally will down tools for a couple of months as they did earlier this year. The cost and political impact would be high, so while it is possible, I think it is unlikely. Therefore, I expect the demand in end markets to recover and be closer to normal in the coming period.

In any case, the company stated that during the most affected period of lockdown, between March and May, trading wasn’t as bad as it had feared. Although the economic outlook remains unclear, SIG said that its full year sales outlook should be moderately better than expected in its May guidance. However, it expects the second half to be loss-making, which will translate to a full year loss.

Additionally, July and August sales levels whilst described vaguely as “encouraging” remained below last year. The company lost market share last year in its U.K. distribution business and that will continue to be problematic: cutting prices might help bring it back but could reduce margins, some evidence of which was already present in these results. That is a cause for concern, as the company seems to have lost some of its long-term customer base and their reluctance to return to dealing with SIG shows the hard slog that remains for the company even as it changes its approach. The U.K. distribution recorded a whopping 47.5% loss in sales revenue on a like for like basis versus the prior half year, showing that it faces real challenges.

There is Sufficient Liquidity

As at 31 August, the Group had cash resources of £267.5m. Its net cash position, pre IFRS 16, was £29.2m. It expects a cash outflow in the second half, as it makes deferred payments to the exchequer. For now, given the capital raise in the Summer, the company maintains sufficient liquidity.

Following publication of the half year results, the market marked SIG shares down around a tenth, as it digested the results.

While there are bright spots – the Continental European business hasn’t suffered as much as the U.K. business, liquidity is sufficient for now and the company expects the trading environment to perform – SIG remains in intensive care and there is not yet evidence of a sustained recovery on which to base an investment. Additionally, there is no prospect of a dividend for the foreseeable future. Continue to avoid awaiting more evidence of a sustained recovery.