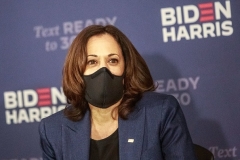 (CNSNews.com) – Democrats in and out of office are sounding alarms about the “national security threat” President Trump’s reported indebtedness may pose.

This is why the American people deserve to have a full accounting of the financial interest, including the indebtedness of the president of the United States. And I do share in that concern. Who does he owe the money to? Tell us. Who do you owe the money to?

And do you owe debt to any foreign nation? You know, do you owe debt, do you owe money — let’s just be clear about what debt means. You owe somebody money. Do you owe anybody money who is impacted by any decision you make as president of the United States? We need to know that. The American people have a right to know that when the president of the United States acts, he acts with their priorities in mind, not with his priorities in mind.

And we’ve already known that he puts his political priorities in front of the American people. But we are now seeing in a way that is evident — clearly evident — that he also is prepared to put his personal interest ahead of the American people by not disclosing who he owes money to. And apparently he owes a lot of money. Maybe to a lot of people. And we should know.

The New York Times says it obtained tax return data going back more than two decades for  Trump and his business organization. “His reports to the I.R.S. portray a businessman who takes in hundreds of millions of dollars a year yet racks up chronic losses that he aggressively employs to avoid paying taxes.”

According to the report, Trump’s finances “are under stress, beset by losses.” And it says, “within the next four years, more than $300 million in loans — obligations for which he is personally responsible — will come due.”

“This president appears to have over $400 million in debt, 420, whatever it is, million dollars in debt,” Pelosi told MSNBC’s Andrea Mitchell.

“To whom? Different countries? What is the leverage they have? So, for me, this is a national security question, in addition to which, it’s so strange that, in 2017, the president paid $750 in federal taxes, and he paid over $300,000 in taxes to other government — other countries that we know of. It may be more.

“So, again, let’s come back to, what does — we take an oath to protect and defend. This president is the commander in chief. He has exposure, to the tune of hundreds of millions of dollars. To whom? The public has a right to know,” Pelosi said.

President Trump did not take any questions at a news conference on Monday, but he did tweet about The New York Times report:

The Fake News Media, just like Election time 2016, is bringing up my Taxes & all sorts of other nonsense with illegally obtained information & only bad intent. I paid many millions of dollars in taxes but was entitled, like everyone else, to depreciation & tax credits…..

…..Also, if you look at the extraordinary assets owned by me, which the Fake News hasn’t, I am extremely under leveraged – I have very little debt compared to the value of assets. Much of this information is already on file, but I have long said that I may release….

…..Financial Statements, from the time I announced I was going to run for President, showing all properties, assets and debts. It is a very IMPRESSIVE Statement, and also shows that I am the only President on record to give up my yearly $400,000 plus Presidential Salary!

According to the New York Times, the financial data show that Trump “owns hundreds of millions of dollars in valuable assets, but they do not reveal his true wealth. Nor do they reveal any previously unreported connections to Russia.”