Despite what many of my fellow millennials may think, bankruptcy is a simple concept.

In my opinion, Moody’s and the other big credit rating agencies tend to be extremely conservative in their outlooks and ratings. Thus, it stood out to me that Moody’s considered Revlon’s (NYSE:REV) previous debt exchange offer, that was not accepted, to be a “Distressed debt exchange.”

The July offer Moody’s was referencing was widely rejected, with only 5.1% agreeing. 95% was needed, so that offer did not come close to being accepted.

“For any bonds tendered for exchange by August 7, 2020, each $1,000 offered by bondholders for exchange will receive $750 in new bonds plus a $50 participation fee for a total of $800. Bonds tendered between August 8, 2020 and August 21, 2020, when the exchange offer expires, will receive $750 of new bonds for each $1,000 of existing notes. The exchange offer is contingent on 95% participation from bondholders and consent from Revlon’s term loan lenders. Consent from the term loan lenders is required because the term loan credit agreements expiring in 2023 and 2025 only consider cash repayments of the February 2021 bonds. Investors who don’t participate risk having the bond covenants removed.”

Now, there is a second offer on the table. This is a new offer. 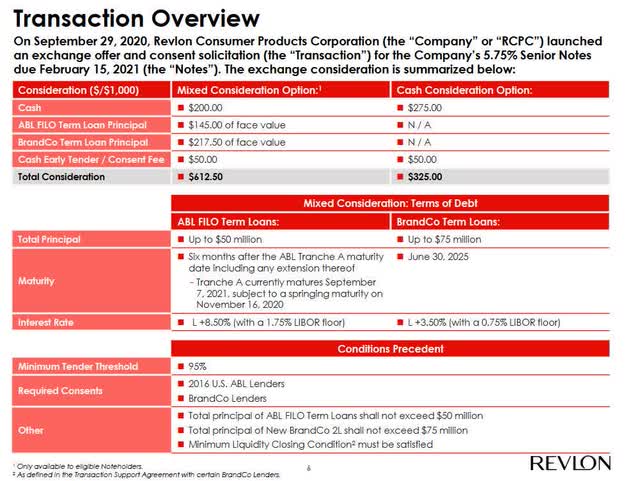 For retail investors, the basic thing to understand is that Revlon has offered more cash for this next offer, albeit with a lower total amount from 80 cents on the dollar to .6125 cents. The cash could feasibly make this offer more attractive. Or perhaps they aren’t interested, since this offer is less overall.

“‘doing the math,’ said an industry source, and trying to calculate if they’d get more of their money back if they agree to the deal, or if they wait for Revlon to sell assets.“

That phrase “doing the math,” is significant. Because, depending on debt holder’s calculations, $REV could be facing bankruptcy in 6 weeks. The market may know even sooner than that, because the debt offer expires 10/27, and really expires 10/13 because it makes little sense to cash in the offer for $50 less cash by accepting the offer between 10/14 and 10/27.

Obviously, there are two possibilities. One is that this offer is accepted. The other is that it is not. Both are of course possible. It is up to the reader to determine how likely you think either outcome is. I can only present the facts and offer a bit of opinion.

Additionally, the relationship between Revlon and some of its creditors is not exactly a good one. UMB is currently suing Revlon over a take-over deal loan. A Lawsuit like this may not help things when $REV is trying to get creditors to agree to a haircut deal.

Ok, let’s assume, key word, assume, the deal is unsuccessful. What happens next?

“If Revlon does not complete this transaction before November 2020, and any part of the $500 million notes remain outstanding, the 2016 $441 million asset based lending facility’s (“ABL”) expiring in September 2021 and the remaining $925 million of 2016 term loans maturing in September 2023 will spring forward to November 2020 (or 91 days before the maturity of the notes). Given the company’s very weak financial performance, Moody’s does not believe that Revlon has sufficient liquidity to repay the notes or that it has the ability to refinance the notes at this time.” 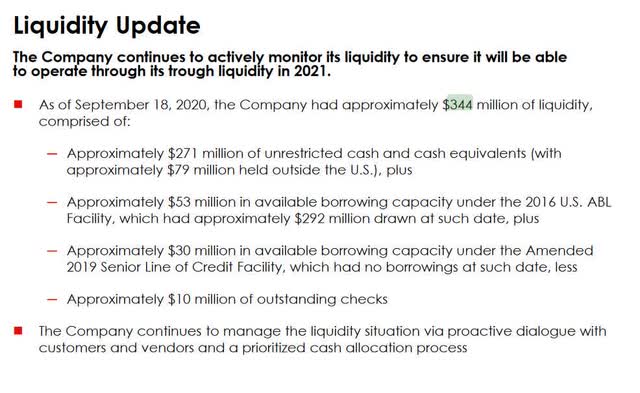 Revlon would not be able to pay off these notes if they all come due in November, according to Moody’s. I’ll take their word for it.

The complicated calculations regarding whether to take the latest offer from Revlon or not must be done by the bondholders/ creditors. As a retail investor, all you need to do is weigh probabilities. If you agree with my thesis and think that there’s a good chance that the offer falls through and Revlon will face a liquidity crisis in November, trade accordingly.

Bill Kavaler of Litespeed Management questioned whether Revlon could remain solvent on their last earnings call:

“And sort of broader question is you’ve got this exchange offer out there. You’re clearly don’t have enough cash to meet your covenants. Is there — can you discuss sort of the broader plan for addressing the capital structure? I mean, just — it seems like you’re just kind of bouncing from one near crisis to the next?”

I recommend either the $5, or, for a more speculative play, the $2.50 Nov 20 puts. In terms of timing, Nov 20 is risky but I think potentially offers the best value. Or, a safer play would be the Feb 2021s, although you’ll pay significantly more for that theta. November 16th is the spring forward date for the bonds, so November 20 is cutting it quite close. Tough call. One could buy both expirations as well. The $2.50 Nov 20s are on offer with a bid/ask of .10/.25 with a last trade at .19 cents The $5 Nov. 20s, a less OTM play, are available for .65/.85 with a last trade at .76 cents and also could provide excellent returns upon a bankruptcy announcement in November. As you can see, this is a thinly traded options market to put it mildly. All of this is as of 10/02/2020.

Reporting on bankruptcy could come fairly soon, if a reporter catches wind that the creditors are rejecting this latest deal. On the other hand, very few people follow this name, so there might not be much advanced notice at all. And there are still ways that REV could stave off bankruptcy absent a deal. The Cash tag feed on twitter is mostly clogged with stuff regarding “Revelation coin,” which I think speaks to the lack of interest as well. More people are seemingly interested in a cryptocurrency than Revlon.

There are two other ways I can think of that Revlon staves off bankruptcy other than this exchange offer.

There is a chance that the company gets sold off to a third party, or that Mr. Perelman bails out the company personally.

As to the risk that the company gets sold off to a third party, here is one opinion:

“The Revlon brand itself is not thought to be sellable, nor is the fragrance portfolio, industry sources said, but Elizabeth Arden, Mitchum and American Crew might be. Still, they’ve all been publicly on the market for a year without any takers. Industry sources noted that Revlon’s value expectations have been high.”

Revlon retained Goldman Sachs to explore “strategic alternatives” in August of 2019. The business is less attractive now, post Covid. On the other hand, the valuation is lower as well. Take what you will from this, but it seems like if Revlon were to be sold to a third party, it would have happened already.

Mr. Perelman is the last option to stave off bankruptcy. Perelman rescuing REV seems more likely than an outside buyer in my opinion. Although it was recently reported that he is trying to raise money to pay off a loan to Citi and may decide not to throw good money after bad in regard to Revlon By all accounts, the man is raising cash anywhere he can. He is selling off some of his art, and investments in other companies like Scientific Games. Could he bail out the company? It seems totally feasible to me. Maybe he wants to save the company because his daughter is CEO. Or he thinks there is value still left. Who knows? Given the extreme debt obligations Revlon may face in November, he also might make the difficult decision to not bail out the company and allow bankruptcy proceedings to continue.

Circling back to my beginning comment regarding bankruptcies and Millenials, I am reminded of Hertz (NYSE:HTZ). I think the story could play out in a similar fashion, albeit hopefully without the subsequent nonsense of the stock rising post-bankruptcy.

A lot of people thought Icahn was going to bail out Hertz in some way. What happened instead? The company declared bankruptcy, and Icahn immediately sold all of his shares the next trading day as the stock tanked from the $2.50 range down to an intraday low .40 cents before hertz stock temporarily turned into a greater fool casino of retail speculation. I think a very similar story could play out here. Carl “only” had a 39% stake, compared to Perelman’s whopping 87%.

With Mr. Perelman holding such a high stake, it’s hard to predict where the stock would land immediately after a confirmed bankruptcy announcement. It is also difficult to predict when exactly the filing would be. Given the small market cap and thinly traded nature of the stock, if/when Revlon files for bankruptcy, it could quickly fall to a low level. Under $1 seems totally possible after bankruptcy, with .50 or even lower than that being possible after a bankruptcy filing.

Additional disclosure: Considering the November 20 and February 21 put options, but not until 10/13 at least (first deadline for the debt swap offer). Probably will wait until end of October or early November if I put on a position.