Praxis Precision Medicines (PRAX) has filed to raise $126 million in an IPO of its common stock, according to an S-1 registration statement.

PRAX has produced intriguing early efficacy results for its lead candidate and the IPO, while not cheap, is worth consideration.

Cambridge, Massachusetts-based Praxis was founded to advance a pipeline of treatments for both broad psychiatric-related and rare diseases of the central nervous system having to do with neuronal imbalances.

Management is headed by president and Chief Executive Officer Mr. Marcio Souza, who has been with the firm since April 2020 and was previously Chief Operating Officer at PTC Therapeutics.

Below is a brief overview video of symptoms of major depressive disorder:

The company’s lead candidate, PRAX-114, is being developed to treat major depressive disorder as both a monotherapy and adjunctive therapy for both acute and maintenance settings.

The drug is in Phase 2a clinical trials in Australia and in early results the firm ‘observed marked improvements in depression scores in MDD patients within two weeks of treatment.’

Below is the current status of the company’s drug development pipeline:

Investors in the firm have invested at least $118 million and include Blackstone, Novo Holdings, Vida Ventures and Eventide.

According to a 2020 market research report by ResearchAndMarkets, the 7MM market size for treatments for major depressive disorder was $9.3 billion in 2017.

The United States accounts for the largest market size of the seven major markets (U.S., EU5 and Japan)

There were an estimated 34 million cases of major depressive disorder in 2017 in the seven major markets.

Major competitive vendors that provide or are developing treatments include:

Praxis’s recent financial results are typical of clinical stage biopharmas in that they feature no revenue and significant R&D and G&A costs associated with its development efforts.

Below are the company’s financial results for the past two and ½ years (Audited PCAOB for full years): 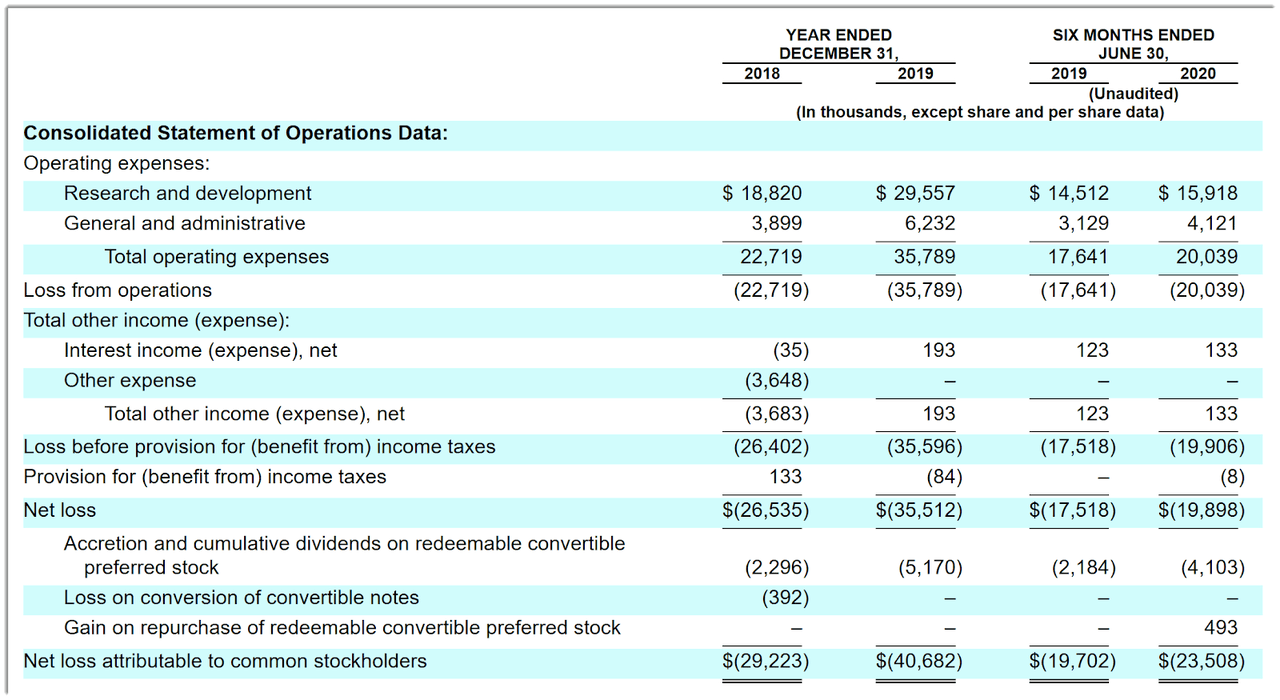 Praxis intends to raise $126 million in gross proceeds from an IPO of 7.4 million shares of its common stock, offered at a proposed midpoint price of $17.00 per share.

No existing shareholders have indicated an interest to purchase shares at the IPO price. This is a common feature of life science IPOs.

Assuming a successful IPO, the company’s enterprise value at IPO would approximate $561 million, excluding the effects of underwriter over-allotment options.

Management says it will use the net proceeds from the IPO as follows:

approximately $70 to $80 million to advance PRAX-114 into and through the completion of our Phase 2/3 trial in MDD, which is intended to satisfy one of two registrational trials required by the FDA to support clinical efficacy, and to complete Part B (PMD) and Part C (longer-term dosing in MDD) of our ongoing Phase 2a clinical trial for PRAX-114;

approximately $30 to $40 million to complete our ongoing Phase 2a clinical trial and a Phase 2/3 randomized, controlled clinical trial for PRAX-944 in ET;

approximately $20 to $30 million to complete our ongoing Phase 1 healthy volunteer trial and the first patient trial for PRAX-562; and

the remainder for advancement of other programs in our pipeline and support of working capital and other general corporate purposes.

Management’s presentation of the company roadshow is not available.

Praxis is seeking public capital investment to fund the next 18 months of its clinical trial operations.

The firm’s lead candidate, PRAX-114, is in various Phase 2 trials and management expects next data readouts in the second half of 2021, so prospective investors have some time to wait before a potential trial-based catalyst.

The market opportunity for treating major depressive disorder is large in the seven major markets. I suspect it is growing in the Asia Pacific region as well.

The firm has disclosed no major pharma collaborations, so is currently pursuing a go-it-alone approach.

So far, that approach appears to be performing well, with early Phase 2 results showing ‘marked’ improvements based on reported information from MDD patients in the trial, so early results are promising.

As to valuation, management is asking IPO investors to pay an enterprise value that is slightly above the typical range for a clinical stage biopharma at IPO.

Although the IPO isn’t cheap, given the impressive early efficacy feedback, for life science investors with a long-term hold time frame of 18 to 24 months, the IPO is worth considering.

Members of IPO Edge get the latest IPO research, news, and industry analysis. Get started with a free trial!

Editor’s Note: This article covers one or more microcap stocks. Please be aware of the risks associated with these stocks.