Postponed For Now, But Next COVID-19 Bailout Will Triple Treasury Note Supply

It may be postponed for now, but what happens to the Treasury market if and when the next COVID-19 bailout bill passes? If President Trump is reelected, it will likely go through in November. If Joe Biden wins, then we could have an even bigger bailout in January when he takes power.

Mark Cabana, head of US Rates Strategy at Bank of America, as quoted by Zero Hedge, believes that if and when it happens, issuance at the long end of the curve will be increased. He’s right. The question I’ll deal with here is, by how much?

The end point I want to make here is that a 3-6x rate of increase in Treasury note supply going forward would be unprecedented and could trigger foreigners to sell their holdings, triggering a spike in long-term rates, a big fall in the dollar index (UUP) on foreign exchanges, and a spike in the price of gold to new all time highs and beyond. No – rising long-term rates would not bring down gold’s dollar price, not if it’s being spurred by international bond selling and inflation fears. It didn’t in the late 1970’s, and it won’t now.

Where We Are Now

In the ZeroHedge piece, Cabana is quoted directly as follows:

This is basically true but it paints a situation where it looks like a lot of money is coming in and therefore there’s nothing to worry about. That’s not quite true. What this statement doesn’t point out is that the $200 billion coming in every month is being used entirely to pay back previous Treasury bill debt incurred from the first COVID-19 bailout bill. Treasury bill issuance has not raised any net cash since June, and as I will show, it probably won’t raise any net cash in October either.

ZeroHedge continues later in the article on Cabana’s reasoning (emphasis in the original):

“Cabana writes that “the most striking takeaway” from his simulations is “the relatively limited impact stimulus has on Treasury’s expected near-term debt issuance, even under the “supersized” supply scenario.” This is due to prior coupon auction size increases and available financing from the Treasury cash balance. “These scenarios also offer limited hope for a supply driven increase in front-end UST rates” which means that any action – assuming there is one – will be entirely in the long end.

Again I believe Cabana is correct here, but his language is overly diplomatic, masking a very dangerous reality. The reality is that impact on the near-term debt issuance will be limited because there’s already so much of it that adding more would be impossible. “Coupon auction size increases” refer specifically to the torrent of emergency cash management bills (CMBs) being issued about four times a week now for an average $30 billion a pop.

New data from the Securities Industry and Financial Markets Association released on Oct. 1 on the state of US Treasury debt shows that the amount of Treasury bill principal debt that came due in September was $1.4116 trillion. Total cash raised from new debt though was only $1.3638 trillion, for a total accrued loss for September of $47.8 billion. Total loss since June has been $50.7 billion.

What about October? Any hope there for a net raise? With the data available, I was able to calculate minimum total principal T-bill debt due this month. According to the monthly statement of the public debt for August (see “Marketable” tab on the Excel spreadsheet available there), total principal debt just from T-bills including CMBs coming due will be $1.211 trillion, with the latest auction listed there being a 42-day CMB auction on Aug. 27. There are three more 42-day CMB auctions in September coming due in October worth a total of $90 billion not listed there, putting the total debt due in October at $1.3 trillion. In addition to this amount there is another $126 billion in notes (2Y-10Y maturities) coming due this month as well, for a total of $1.426 trillion in debt coming due.

How much money can T-bill auctions raise in October? This I can’t be sure of exactly, but my estimate is as follows. Since July, the average monthly gross cash raise for non-CMB T-bills was $865 billion. If that’s repeated, we are about $560 billion short of breakeven. The remainder will have to come from more emergency CMBs.

There were 18 CMB auctions in September, a rate of four per week, an all-time record. Assuming the same record number in October, the average CMB auction being about $30 billion, 18 would raise another $540 billion give or take a few billion. That’s still $20 billion short of breakeven. And remember, all CMBs issued for this month will have to be paid back over the next three to four months as they come due. The smoking treadmill does not simply stop on its own.

More Longer-Term Debt Is The Only Conceivable Option

How does this CMB smoking treadmill cool down, theoretically? Cabana admits only longer-term debt can do it. We do have some precedent for this in the form of the 2008 financial crisis spending spree. CMB issuance also skyrocketed back then starting in September in a flurry of bailouts and government spending, and CMB issuance did eventually cool down. Here’s how it happened.

From September 2008 to January 2011 when CMB issuance finally abated, total CMBs issued was $3.57 trillion, a record for that period. Standard T-bills of 4-week to 1Y maturities by comparison was $12.05T. So CMBs were about 30% of T-bills proper. For perspective, CMB issuance since March has been a whopping 58% of all T-bill issuance proper. $4.115 trillion in CMBs versus $7.08 trillion in standard 4-week to 1-year bills. Clearly we are now in a much more acute situation.

In any case, how did the 2008 CMB fever finally cool down? With a generous dose of longer term debt painkillers in the form of 2Y-10Y Treasury notes. You can see where that increase started in the chart below, compiled from the same SIFMA data tables:

This can be broken down across maturities to see how precisely it was done. See below:

All note maturities increased fairly evenly so as not to bump the curve too much at one specific point. The thing is, this increased note issuance has not abated ever since, and it continues to this day. The treadmill continues. Here’s a chart out to the present so you can visualize the permanence of these shifts:

Why isn’t there as much of a spike post COVID-19 crisis yet? Because the first bailout bill was funded almost entirely from T-bills and CMBs, which are still being paid for by still more of those in a $1.4 trillion monthly circle. By the next bailout bill, the burden will shift to 2Y-10Y note issuance, and we’ll see a larger spike. Here’s CMB issuance over the same timeframe as above:

My point is, with emergency CMBs now the clear majority of all T-bill issuance at 58%, the only way to get out of this smoking treadmill is to issue much more longer term debt across all longer maturities indefinitely, exactly as happened post 2008 financial crisis, and let up on the gas on the short end as Cabana suggests must happen. Otherwise there’s no way to raise net cash through debt.

How Much More? About $3 Trillion

The next question is how much more in Treasury note issuance is required when the next bailout bill passes? How much are we talking about to get this under control? Well, let’s assume a circa $2 trillion bailout bill passes by January or sooner. That wipes out the Treasury’s current cash balance at the Fed entirely and it will have to be replenished. Plus, with $1.4 trillion in short-term principal debt coming due every month now, the Treasury will have to raise let’s say another trillion or so on top of that in order to cool down the front end and get the treadmill down to $400 billion or so monthly. That’s about $3 trillion total that will need to be raised in notes and perhaps some 30Y bond issuance as well.

According to SIFMA, $3 trillion has been raised net in the Notes (2Y-10Y) category since December 2014, 70 months, or roughly six years.

If the Treasury needs to raise that cash within a year, it will have to more than sextuple volume at least (1 year versus 6). If it takes two years, it’s still triple the rate of issuance. How long does it have? Well, we know it will have to raise $2 trillion almost immediately to cover the bailout bill, $1.5 trillion if it wants to use some of its existing cash balance at the Fed. As for the other $1 to $1.5 trillion to cool down the short end, let’s give them time and say two years until it gets the treadmill down to $700 billion a month. So realistically, it’s going to be somewhere between 3x and 6x the rate over the last 6 years.

Here’s the big problem though. Whenever this bailout passes, this is going to make foreign Treasury note and bond holders nervous, and they may start selling, fearing a rise in rates from this flood that could eat into their principal and fearing price inflation on top of that. Treasuries could become a hot potato, and the Fed could lose control of the long end of the curve as the market asserts itself after a 50-year fiat debt binge.

To illustrate the clear and present danger of foreign selling, here’s one more chart, compiled from historical Treasury International Capital data on foreign holders of US Treasuries. 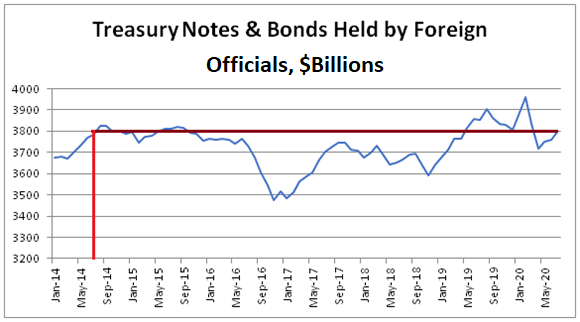 There has been no net buying of notes and bonds by foreign officials for about – you guessed it – six years now. Triple to sextuple the rate of issuance and I see absolutely no reason why this situation should get any better. It’s much more likely to get worse, and when foreign selling really speeds up, possibly on the passage of the next bailout bill, in my view it will be very difficult to stop. The Fed can still keep rates nominally stable by absorbing all the selling, but then the dollar itself would take most of the damage.

Once the next COVID-19 bailout bill passes, probably by January at the latest, assuming it will be about $2 trillion, the mid-to-long end of the curve is going to get inundated by between triple and sextuple the supply stream of the last six years, by necessity. If Biden is elected, it could be even higher than that. If foreigners get nervous and start selling, Treasuries are going to tank, and if the Fed steps in, the dollar is going to tank, consumer price inflation is going to spike as food inflation already is consistently above 4% annual by both the Consumer Price Index and Personal Consumption Expenditures Index measures since April. Here’s CPI food inflation:

Here is PCE food inflation, even higher than the CPI measure:

At a certain point, the Treasury market is going to break lower as supply explodes, and the Fed will have to buy furiously to stop it, if they even can. Best own gold, silver, and hard assets now before that happens.

The End Game Investor is dedicated to protecting real wealth and helping subscribers profit during the ongoing global fiat monetary collapse. Coming from an Austrian School perspective on economics, we discuss ideas like this one and other more exotic ones using a variety of vehicles that are low-risk/high reward. If you suspect that something is seriously wrong in the monetary sphere and that the US fiat dollar standard is in existential danger, then take a peek at what we’re doing to prepare for the end game with a two week free trial, lest the end game catch you unprepared.

Disclosure: I am/we are long GLD, AAAU, SLV, PSLV. I wrote this article myself, and it expresses my own opinions. I am not receiving compensation for it (other than from Seeking Alpha). I have no business relationship with any company whose stock is mentioned in this article.

Additional disclosure: I am short TLT