Headquartered in Beverly Hills, California, PacWest Bancorp (PACW) is a $27 billion asset bank holding company for Pacific Western Bank. PacWest focuses on relationship-based commercial banking to small, middle market, and venture-backed businesses across the United States rather than your more typical retail community bank. That said, PAWC does provide traditional banking services to over 70 branches throughout California and one branch located in Durham, North Carolina. Its main executive offices are in Denver, Colorado. While the past few years have been relatively quiet, PACW has historically supplemented organic growth with strategic acquisitions, successfully completing almost thirty acquisitions since 2000.

When I review PACW, I find that it has built an attractive franchise with unique asset and deposit generating capabilities across many different commercial segments. Following significant balance sheet de-risking, I believe earnings are becoming less volatile with a more sustainable net interest margin (NIM). In addition, the strong profitability due to a lean operating cost structure has also enabled a sustained strong dividend payout ratio, even though it was lowered earlier this year.

While I do believe the company is on a more stable footing now, upside catalysts pretty limited, in my view. While the current valuation might seem enticing, the loan portfolio is pretty opaque and PACW does have a history of larger than average net charge-offs ((NCOs)).

Personally, I would recommend staying on the sidelines due to the possible credit problems. I am waiting until third quarter earnings to re-review the credit profile. That said, PACW does have a great earnings profile and should earn multiples more than its peer bank counterparts once interest rates work themselves higher again.

In the second quarter, the net interest income of $256 million was up just slightly relative to first quarter results, while the NIM declined 11 basis points, to 4.20%. The NIM breakdown went something like this: total interest-earnings assets yield compressed 49 basis points, while the funding costs decreased 61 basis points from the first quarter. This sizable linked quarter drop in funding costs was due to the prepayment of higher costing Federal Home Loan Bank borrowings earlier this year. The lower deposit costs generally helped support the overall NIM from completely fallout out the bottom.

What was most surprising to me was that loan balances were actually lower than first quarter levels, even with PPP lending. All told, loans decreased by $50.7 million in the second quarter to $19.7 billion. According to the press release, PACW funded $1.2 billion of PPP loans in the quarter and continued funding loan draws in construction; however, this was more than offset by paydowns on existing credits in the venture capital and asset-based loans. 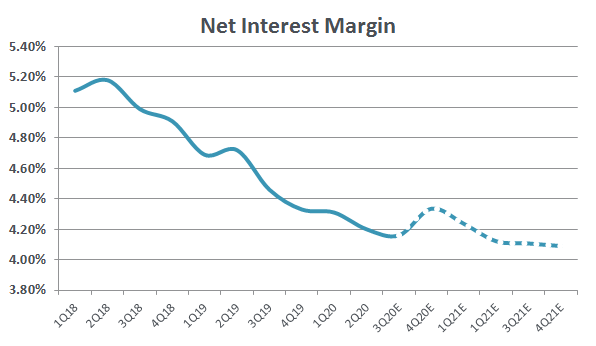 While reading the 10-Q, it indicated that when backing out PPP related loans, the NIM would have been 4.25% and the loan and lease yield would have been 5.10% (rather than the stated 5.01%). While these results remove some of the sting to the massive NIM compression over the past few quarters, it still hurts to see earning assets reprice downwards so quickly.

I am personally modeling both the revenue outlook and the margin to be a little lower from current levels. While I think a significant majority of the revenue pain is behind them, I think PACW still has a little more loan repricing pressure yet to ding the margin further.

However, there were a sizable amount of credit downgrades in the second quarter. At the end of June the loan loss reserve to nonperforming loans (LLR to NPL) ratio slipped to 181% from 231% last quarter. When thinking about credit, a bank management team would like to see that ratio increase every time there is a sizable provision, not decrease like it just did. In more layman’s terms, while the management team did add to the loan loss reserve, it was more than offset by the size of loans that are deteriorating. 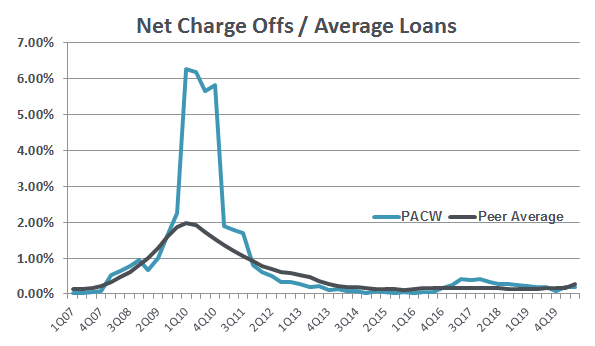 The second quarter’s additional downgrades took the nonperforming loans to 0.84% of total loans. At the end of the quarter, approximately 11% of total loans were considered COVID impacted portfolios (hotel, retail CRE, commercial aviation and restaurant).

When I think about PACW and its history of credit losses, it’s hard to wrap my head around what is happening. The bank has done a tremendous job developing and becoming the key lender to a unique niche of businesses – hence the significantly better than average NIM. While on the other side of the coin, the bank has been very reluctant to provide more information on the type of businesses they are lending to and how those segments of the economy did in the last recession.

While it is clear that with more risk, typically comes more reward, I would like to better understand the type of venture capital and private equity PACW is lending before I can honestly determine is things have gotten better. The sizable amount of credit that migrated down in to nonperforming give me a sense that things are not as good as other banks. While the third quarter’s earnings will provide clear update, I would rather be wrong while watching on the sidelines than taking an unnecessary risk.