October natural gas futures rolled to November at an over 60 cents per MMBtu contango. Contango is a forward premium in a futures market. The steep level of contango between the two contracts reflected the natural gas market’s seasonality as the October contract represents the injection season where stockpiles build. The November contract reflects the beginning of the withdrawal season during the peak time of the year for natural gas demand.

Natural gas stockpiles rise from March through November and fall from November through March each year. Meanwhile, 2020 is no ordinary year in natural gas and markets across all asset classes. The November 3 election will determine the President for the next four years and the majorities in the House of Representatives and the US Senate. One of the many issues facing voters when they go to the polls is the future of US energy production. Over the past years, technological advances in fracking and fewer regulations made the United States the world’s leading natural gas and crude oil producer. The Trump administration supports US energy independence; the Democrats favor alternative energy sources that reduce the carbon footprint. Therefore, the election presents a unique dynamic for the energy markets, which could cause increased volatility over the coming weeks, months, and perhaps years.

As natural gas moves towards the peak season of demand facing bullish and bearish factors. We should expect lots of price variance in the volatile natural gas futures market over the coming weeks.

Another storm in the gulf causes a lower high

Hurricane Delta was steaming towards the US Gulf Coast on Friday, October 9, as a Category 3 storm with life-threatening storm surge, damaging winds, and rainfall flooding from Louisiana and east Texas to Mississippi. The hurricane will hit the same areas ravaged by Hurricane Laura in September.

The delivery point for NYMEX natural gas is at the Henry Hub in Erath, Louisiana, putting some of the energy commodity’s infrastructure in striking distance of the storm. In 2005 and 2008, the damage caused by Hurricanes Katrina and Rita caused nearby NYMEX natural gas futures prices to move above $10 per MMBtu. In 2005, they rose to an all-time peak of $15.65. On Friday, the storm pushed the price of natural gas higher.

The daily chart shows that November futures rose to a high of $2.821 on the final trading session of the week and were trading at over the $2.75 per MMBtu level as the Gulf Coast states brace for the storm. Price momentum and relative strength indicators turned higher and were above neutral readings. Open interest dropped from 1.286 to 1.247 million contracts since October 5, as some market participants exited risk positions. Daily historical volatility was at 80%, reflecting the wide trading ranges in the energy commodity.

Meanwhile, the November futures contract reached a peak of $3.002 per MMBtu on September 4. After a correction, they rose to a lower high of $2.928 on September 24. The latest peak was another lower high. We will find out next week if the storm causes an end to the short-term pattern of lower highs. Seasonality favors the upside as we are heading into the peak season for demand in November, but inventory levels are anything but bullish in October 2020.

On Thursday, October 8, the Energy Information Administration reported that natural gas stockpiles increased by 75 billion cubic feet for the week ending on October 2. 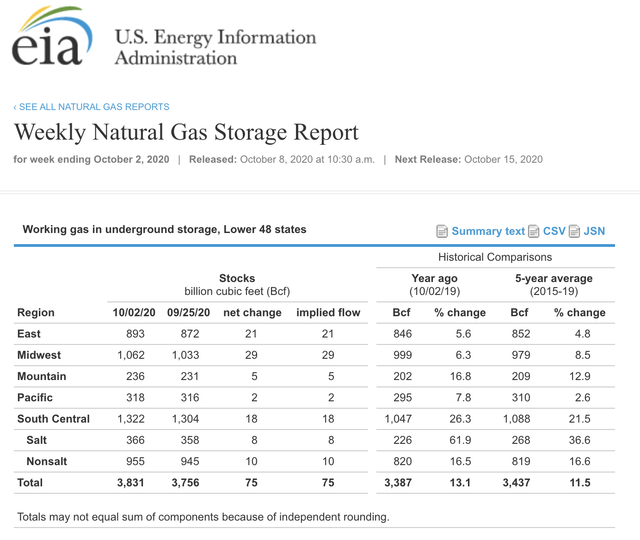 The chart illustrates that the amount of natural gas in storage across the United States stood at 3.831 trillion cubic feet as of October 2. The level was 13.1% above the amount in early October 2019 and 11.5% above the five-year average. Stocks are at a high level at the end of the 2020 injection season, with plenty of supplies available to meet heating requirements during the coming winter months.

To frack or not to frack is one of the debate issues in the upcoming US Presidential election. In this week’s debate between vice presidential candidates Mike Pence and Kamala Harris, the incumbent said the opponents would end fracking. Senator Harris responded that “Joe Biden will not end fracking.” However, the Democrat’s progressive wing that supports The Green New Deal continues to favor an immediate ban on the process that extracts the lion’s share of natural gas from the earth’s crust in the United States. One of the loudest voices for the progressives is Congresswoman Alexandria Ocasio Cortez, who tweeted, “Fracking is bad, actually” during the debate. The division among Democrats could take the center of the stage if the opposition sweeps the November 3 election. Limiting or banning fracking would reduce the US output of the energy commodity and could have a bullish impact on prices in the future.

Meanwhile, right after the price of natural gas reached its lowest level since 1995 in late June at $1.432 per MMBtu, Warren Buffett, the value investor, paid $10 billion for the transmission and pipeline assets of Dominion Energy (D). Buffett’s Berkshire Hathaway made a substantial wager on the future of natural gas. Serendipitously, the price of natural gas has made higher lows, and higher highs since Mr. Buffett announced the acquisition. Based on the price action, the $10 billion price tag is looking like a bargain.

Uncertainty breeds volatility in markets. Mr. Buffett is betting on natural gas’s future. Progressive Democrats want an end to fracking. A hurricane is heading for critical infrastructure along the Gulf Coast. Simultaneously, the natural gas market is heading into its peak season for demand with a potential for the highest inventory level since the EIA began reporting data. Bullish and bearish factors are pulling the energy commodity in opposite directions. Typically, the beginning of the withdrawal season comes in early November, right after Election Day. It is no surprise that natural gas daily historical volatility is sitting around the 80% level.

Inventories have already risen above last year’s pre-peak season high of 3.732 tcf. While the percentage over last year’s level dropped for the twenty-seventh consecutive week, the all-time high in stocks at 4.047 tcf is within reach. An average injection of over 36 bcf over the next six weeks would push stockpiles to a new record high. According to Estimize, a crowdsourcing website, the early indications for the week ending on October 9 were for a 49 bcf injection on Friday.

In the aftermath of Hurricane Delta next week, we could see the price of natural gas move lower if there is little or no damage in the natural gas arena. However, the storm season is not over. The election could present another storm for the energy commodity if Democrats win the White House and majorities in both houses of Congress. The opposition party seems to have commanding leads in many polls. However, the polls were wrong in 2016, setting up more than a little uncertainty over the coming weeks. If the election turns out to be close, candidates could contest the results, leading to weeks and months of uncertainty about the leadership in 2021 with substantial ramifications for US energy policy. President Trump and Republicans favor the status quo and a drill-baby-drill and frack-baby-frack path of energy independence for the United States.

Inventories could limit the upside in natural gas, but expect volatile conditions- BOIL and KOLD are trading tools

From a short-term perspective, more natural gas is available at the beginning of the withdrawal season in 2020 than in 2019. Inventory levels are bearish for the energy commodity. In November 2019, the price of the continuous futures contract rose to a high of $2.905. Over the first six months of 2020, natural gas moved steadily lower, reaching a quarter-of-a-century low of $1.432 in late June. Warren Buffett scooped up assets at the lows at a bargain-basement price.

While November futures traded to a high of $3.002 in early September, and natural gas for delivery in January 2021 was trading at around $3.37 per MMBtu on October 9, the continuous futures contract has yet to challenge the November 2019 high. So far, the peak has been at $2.821. The $3 level remains elusive as we move into the peak season over the coming weeks.

We will likely see a higher high and another challenge of the $3 level on the November futures contract a politics, supply and demand fundamentals, and seasonality cause lots of price variance in the natural gas futures arena over the coming weeks.

Trading rather than investing in natural gas is the optimal approach to the volatile commodity. The futures and futures options that trade on the CME’s NYMEX division are the most direct route for a risk position in the energy commodity. For those looking to participate in the market without venturing into the futures arena, the ProShares Ultra Bloomberg Natural Gas product (NYSEARCA:BOIL) and its bearish counterpart (NYSEARCA:KOLD) seek to provide double leverage compared to the futures prices. The fund summary for BOIL states: 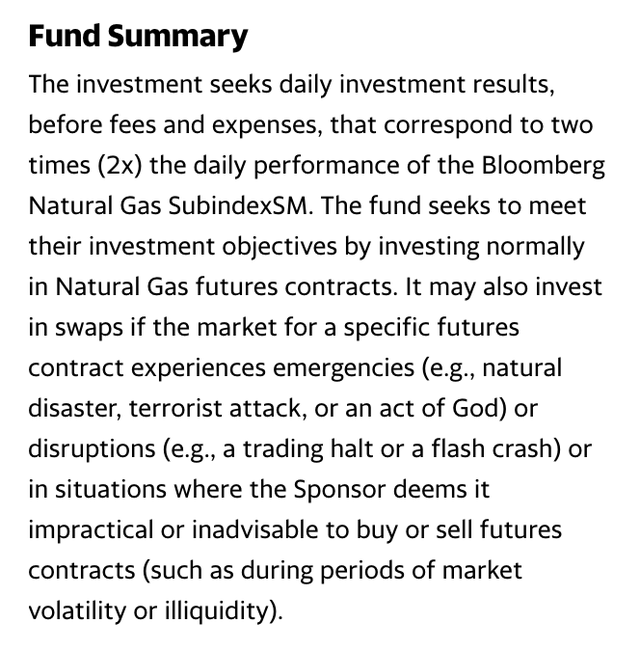 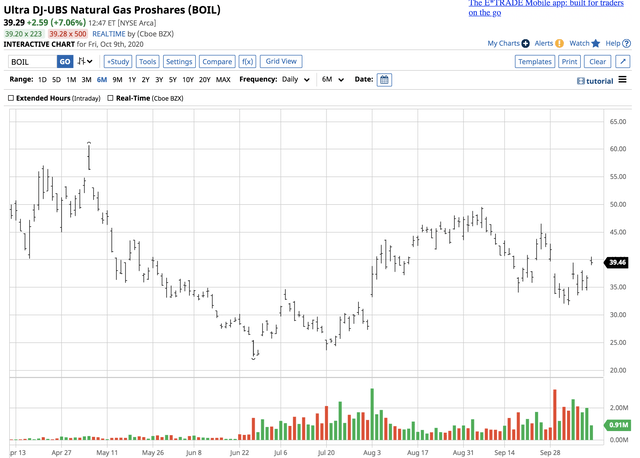 Over the same period, BOIL rose from $31.80 to $40.55 per share or 27.5%. The product did not deliver twice the percentage gain, but it did turbocharge results over the period. The cost of rolling October to November futures on NYMEX at around 60 cents per MMBtu contango likely ate away at the product’s value. BOIL and KOLD are only appropriate for short-term risk positions in natural gas as the price for leverage is time decay.

We should expect a continuation of volatility in the natural gas futures arena over the coming weeks. Mother Nature, politics, stockpiles, and seasonality could make price variance move even higher between now and the end of 2020.