MLPs followed up last week’s modest bounce with a huge week in a risk-on surge for equity markets, commodity markets and everything else this week. MLPs led the way for a second straight week, beating the AMNA by nearly 300 basis points. Oil prices, natural gas prices, and the stock market were all strong this week, which helped. 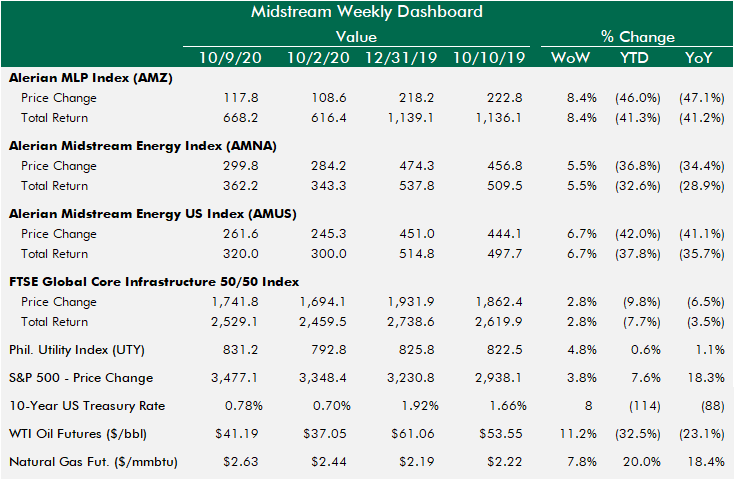 Monday’s big positive move was helped by an MLP roll-up announcement and TRGP’s positive update. Wednesday’s big positive move seemed to be short covering after the vice presidential debate where Kamala Harris was emphatic about Biden not banning fracking. PAA was particularly strong after being pressured as the posterchild for a fracking ban on federal land.

AMZ has bounced 11% off the low point of September, and AMNA has bounced 6%. The positive move after the horrible September has been a nice respite, but it does feel like the rest of 2020 will continue to exhibit high levels of volatility in both directions as hedge funds whip things around and investors trade through the election and tax loss season.

It’s been a few months since I updated the below chart. A few notes on the changes in the last few months:

It’s Got What it Takes…Why Can’t This Be Love?

This week, Eddie Van Halen passed away. So, I thought it would make sense to tie that into this week’s post. Rather than make some jokes involving former ET CFO Jamie Welch and the song “Jamie’s Crying” or make the easy connection to this recent bounce to “Jump” or “Eruption”, I’ll make it more personal.

My history with Van Halen starts later than most. I first became aware of them in 1991 when the band released the album “For Unlawful Carnal Knowledge”. So, I was never up to speed on the difference between the original band vs. the Sammy Hagar version. I was 10 years old and remember seeing the video for “Right Here, Right Now” on MTV. It was the one with all the text throughout the video calling out social issues and other random things, some of which feel relevant today, like:

I liked the song so much that I tried to buy the CD, but I was such a noob about music that I ended up buying the single “Right Here, Right Now” by Jesus Jones, an epic fail. Eventually, I bought the right CD. The Right Now video was such a hit that Pepsi used the concept and song to launch “Crystal Pepsi” in 1993. That commercial was then spoofed by Saturday Night Live in an absurd version about “Crystal Gravy”.

CEQP won the week with a 20%+ gain this week, perhaps helped by the guidance update from fellow Bakken operator TRGP. TCP traded through its implied deal price on the expectation that the bid from its sponsor TRP announced this week will be sweetened. Other G&P MLPs DCP, WES and MPLX were also up double digits in a good week for upstream-oriented G&P names. 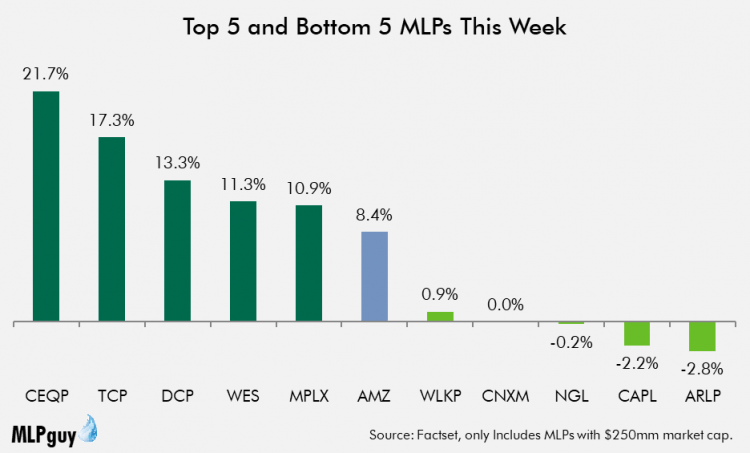 MPLX went from bottom 5 to top 5. On the YTD leaderboard, DKL became the third MLP to turn positive for the year. NGL rejoined the bottom 5 after lagging this week. 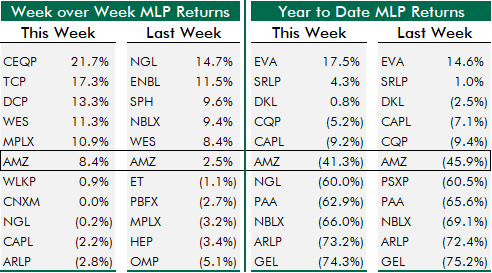 TRGP’s update on guidance and the authorization of a buyback program put a floor in the stock and helped it win the midstream corporation group by a wide margin this week. Other more upstream-focused names comprised the rest of the top 5, including AM, ENLC and HESM. The bottom 5 was mostly names you’d rotate out of if you were trying to get more exposure to a recovery in deeply discounted midstream names. 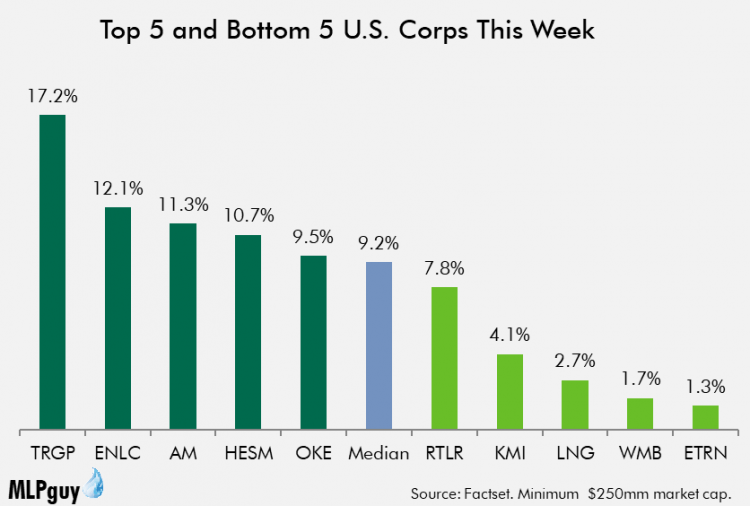 LNG and WMB repeated near the bottom of the group, and KMI lagged as well, in a rotation out of gas names into G&P and oil names. ENLC, TRGP and OKE repeated near the top. On the YTD leaderboard, AM leapfrogged WMB into the top spot. On the downside, TRGP jumped two spots over RTLR and OKE. 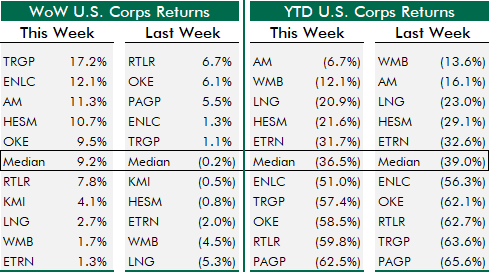 Canadian midstream rallied across the board this week, but the rally was a bit more subdued, as you’d expect. TRP outperformed ENB, with the market responding favorably to the roll-up of TCP that will simplify the structure and get TRP more U.S. gas pipeline exposure. 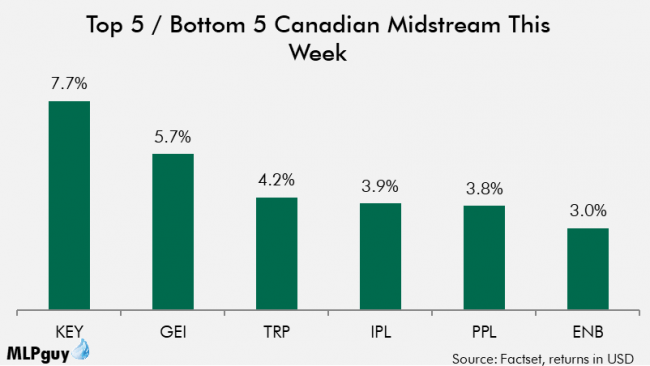 Keyera (OTCPK:KEYUF) repeated as the top name in Canada this week. ENB was again near the bottom. On the YTD leaderboard, Gibson (OTC:GBNXF) extended its lead on the group, not much movement otherwise.

News of the (Midstream) World

Quite a bit of news action this week, including another opportunistic MLP roll-up and some management changes. On the negative side, it was reported that one of the few utilities that appeared to still be interested in accumulating midstream assets appears to be contemplating an exit of their portfolio. This would take another potential buyer out of the market for consolidation down the road.