The entire energy sector has been going through a fierce sell-off over the last four months, in contrast to the broad market, which has been hovering around its all-time highs. Kinder Morgan (KMI) has not escaped the sell-off and thus it is now offering a 4-year high dividend yield of 8.5%. During sell-offs, most investors view such an abnormally high dividend yield as a signal of an imminent dividend cut. However, the dividend of Kinder Morgan is safe.

The pandemic has caused a severe recession in the U.S. Consequently, many companies have gone out of business and thus the total commercial demand for natural gas has decreased this year. However, it is critical to note that the effect of the coronavirus crisis on the natural gas market is much smaller than the effect on the oil market. The Energy Information Administration [EIA] expects the average annual U.S. demand for natural gas to decrease only 2.7% this year, from 85.0 Bcfd in 2019 to 82.7 Bcfd. This decline is nearly one-third of the 8.2% decline expected in the global demand for oil products this year.

The limited effect of the pandemic on the natural gas market and the resilient business model of Kinder Morgan were evident in the results of the company in the second quarter, which was marked by unprecedented lockdowns and a severe recession. The distributable cash flow per share of the company fell only 12% over the prior year’s quarter, from $0.50 to $0.44. As a result, Kinder Morgan achieved a dividend coverage ratio of 1.68, with its distributable cash flow exceeding its dividend by $404 million. Such a performance in the most adverse quarter in years is certainly admirable.

Due to the effect of the pandemic on its business, Kinder Morgan reduced its guidance and now expects to post annual distributable cash flow slightly more than 10% lower than its initial guidance of $5.1 billion. However, such a decline is benign. To be sure, if Kinder Morgan meets its guidance and achieves distributable cash flow of about $4.5 billion, it will post a dividend coverage ratio of 1.9, which will be exceptionally strong under the adverse business conditions prevailing this year.

While the pandemic has been the primary cause of the sell-off of the energy sector, another factor has been the hype that “it is the end of the energy market as we know it.” In other words, the companies that rely on conventional energy sources are assumed to be threatened by the companies that rely on renewable energy sources. It is remarkable that NextEra Energy (NEE) recently surpassed Exxon Mobil (XOM) in market capitalization for the first time in history.

In fact, the global demand for natural gas is expected to grow 36% over the next two decades, primarily thanks to an increasing industrial demand. 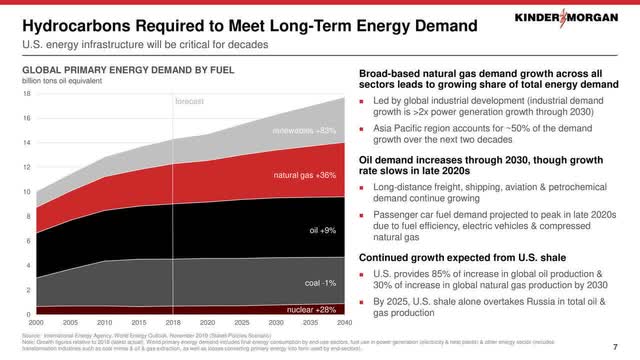 The U.S. is likely to provide approximately 30% of the increase in the global demand for natural gas. In addition, by 2025, the U.S. shale oil and gas production is expected to exceed the total oil and gas production of Russia. Kinder Morgan connects all the major U.S. natural gas resource plays to key demand centers and hence it is ideally positioned to benefit from the secular growth in the demand for natural gas.

Numerous companies in the energy sector have cut their dividends this year due to the impact of the pandemic on their business. Kinder Morgan is a bright exception, as it has raised its annual dividend by 5% this year, from $1.00 to $1.05. This dividend hike is just another testament to the resilience of the business model of the company and the safety of its dividend. When a dividend is at the risk of being cut, management does not raise it.

Kinder Morgan had initially announced its intention to raise its dividend by 25% this year, from $1.00 to $1.25, but it then decided to pursue a more conservative approach due to the pandemic. Nevertheless, management has reaffirmed its commitment to raise the dividend to $1.25 as soon as the pandemic begins to subside and the business of the company returns to normalcy. 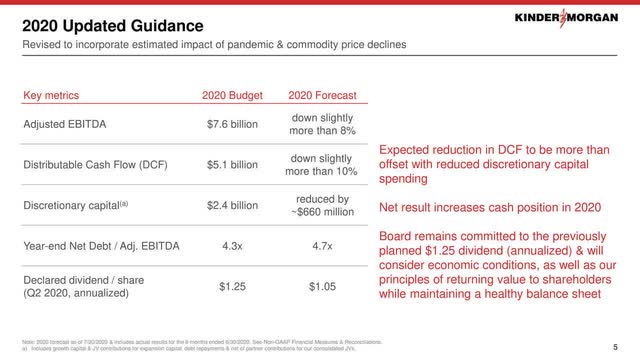 As mentioned above, Kinder Morgan has reduced its guidance for its expected distributable cash flow this year by about $0.6 billion but it will also reduce its discretionary capital spending by a similar amount. Whenever Kinder Morgan raises its dividend to its target level of $1.25, it will be offering a 10.2% dividend yield based on the current stock price, with a healthy dividend coverage ratio of 1.6 (=1.9*1.05/1.25).

In early 2016, Kinder Morgan was forced to cut its dividend by 75% due to its high debt load and the downturn in the energy market back then. However, that dividend cut marked a major inflection point for the company. Since then, Kinder Morgan has been funding all its capital expenses and its dividends with its internally generated cash flows and thus it has reduced its leverage (net debt to EBITDA) from 5.6 in 2015 to 4.7 now. It has also reduced its net debt (as per Buffett, net debt = total liabilities – cash – receivables) from $47.1 billion in 2014 to $37.2 billion now.

Moreover, thanks to the indiscriminate sell-off of the entire energy sector, the stock price of Kinder Morgan has been in a steady decline over the last four months. As a result, the stock is currently offering a 4-year high dividend yield of 8.5%.

Investors are thus given a rare opportunity to lock in a 4-year high dividend yield of 8.5% of this exceptionally resilient company. The dividend is safe thanks to the exceptionally strong dividend coverage ratio of 1.9 this year, the resilient business model, the manageable amount of debt and the growth prospects of the company.

The energy sector has been beaten to the extreme due to the coronavirus crisis and the hype that “it is the end of the energy market as we know it.” However, as mentioned above, the demand for natural gas will continue to grow in the long run thanks to its environmentally friendly status while Kinder Morgan has one of the most resilient business models in the energy sector. Therefore, investors should take advantage of this rare investing opportunity and lock in the 4-year high dividend yield of 8.5% of the stock.