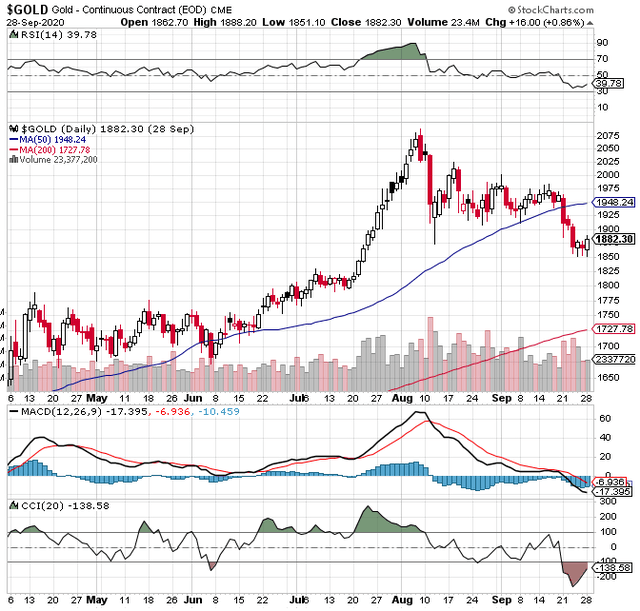 (Gold prices are up 23% year-to-date despite the recent drop. Credit: StockCharts)

It has been an up-and-down month for the gold & silver sector in September. Gold prices (GLD) took a breather mid-month and fell to the mid-$1,800s, but after hitting extremely oversold levels on the CCI it has since popped back to $1,900/oz.

I used this short-term dip in gold prices to accumulate shares of several high-quality gold stocks, and I’m prepared to increase my investments should we see another dip. Gold prices can be volatile, but in my view, the trend is still higher and these dips are nothing more than corrections that should be taken advantage of!

If you look at a longer-term chart (3 years) you’ll see that gold prices remain in a strong bull market dating back to early 2019 when the “golden cross” pattern formed.

In addition, lawmakers are in talks for a second stimulus package, and this should provide a further boost to gold prices due to a weakening of the U.S. dollar.

It is a good time to be a gold miner, as most miners have recovered from the COVID-19 closures earlier this year. Next month, we’ll start to see Q3 earnings come in, and I think we’re going to see record results from miners as average realized gold prices will be $125-$150 an ounce higher than Q2 levels.

I’ve scoured various websites and newsletters to find the most relevant news for gold & silver stock investors for the month of September 2020. Here’s what I found. 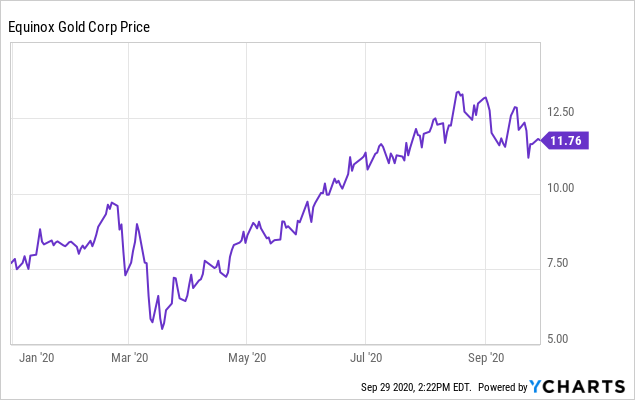 Mid-tier gold miner Equinox Gold (OTC:EQX) has temporarily suspended mining activities at its Mexican mine due to an illegal road blockage. According to Equinox, community members have alleged that Equinox is non-compliant with the social collaboration agreement it signed in 2019.

Los Filos is an open pit and underground mine and it is a core asset for Equinox, estimated to produce up to 190,000 ozAu in 2020 with a reserve base of 4.4 million ozAu. 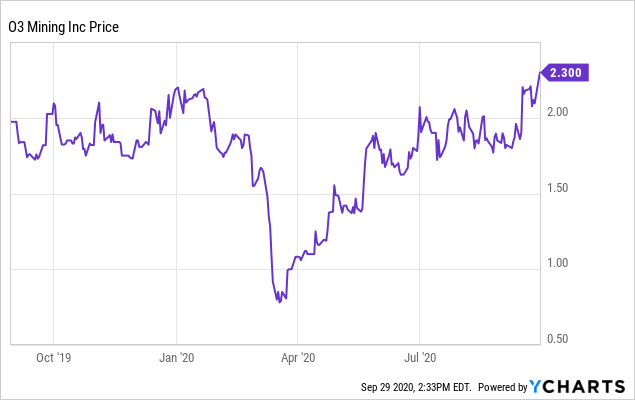 Junior gold developer O3 Mining has reported the potential for positive economics for its 2.5-million ounce Marban project in Quebec.

The project carries a post-tax net present value of C$846 million (US$632 million) using spot gold prices, with upfront capex of $C256 million (US$191 million). The project is estimated to produce 115,000 ozAu annually at $822/oz all-in sustaining costs, according to the preliminary economic assessment.

An aggressive 150,000-meter drill program is planned for this year and next. O3 is quickly becoming a junior gold stock to keep your eyes on as a potential M&A candidate.

Readers should be advised that O3 Mining is considered a microcap company as it carries a small market cap ($140 million) and it is a pure exploration and development company that does not produce any cash flows from operations. Shares also carry low trading volume on the U.S. OTC. 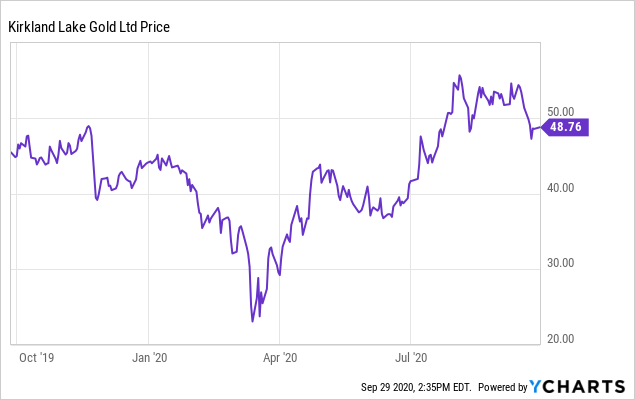 These results hint towards a potentially larger reserve and resource base at Detour Lake than what’s included in the current estimates. The miner aims to add two more drills and complete at least 75,000 meters by year’s end.

The $3.7 billion Detour Gold takeover has been a fantastic move by Kirkland Lake Gold. The mine generated $89 million in free cash flow last quarter alone due to strong production and high recoveries, and higher gold prices. 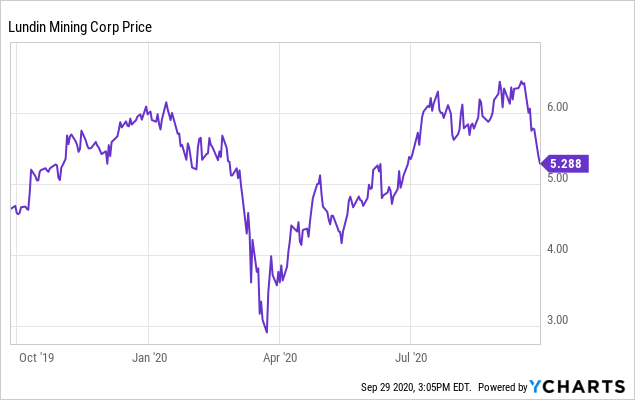 It has not been a good month for Lundin Mining (OTCPK:LUNMF).

On Sept. 27, the mid-tier copper & gold miner reported “significant damage” to all four SAG and ball mill motors at its Chapada mine in Brazil, caused by a power outage. It has pulled its production, cash cost and capex guidance for Chapada this year.

On Sept. 25, Lundin reported on a fatal accident at its underground Neves-Corvo mine in Portugal, and temporarily suspended operations. 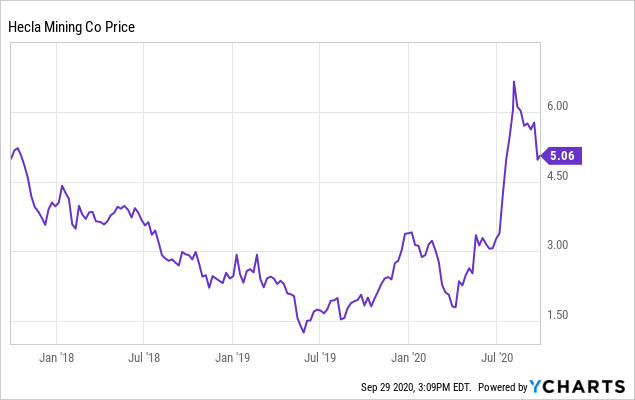 The silver and gold miner expects to produce between 3.2-3.4 million silver ounces and 41,000 to 43,000 gold ounces in Q3, while repaying its revolving credit facility and increasing cash and cash equivalents to over $90 million.

Hecla is highly leveraged to silver prices. While I’ve been bearish on the stock in the past because of its high debt, the miner is profitable, has quality assets in favorable mining jurisdictions, and has alleviated my balance sheet concerns as it refinanced $475 million of its debt, extending the maturity dates to 2028. 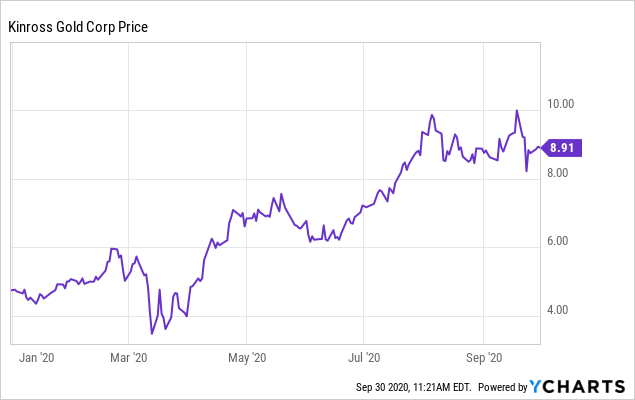 Kinross Gold (NYSE:KGC) has updated its investors with new guidance to 2023. The senior gold miner says it expects production to rise by 20% to 2.9 million gold equivalent ounces by 2023, while also seeing a downward trend in costs and capital expenditures (falling by $200 million to $700 million by 2023.)

Kinross also announced it will buy a 70% interest in the Peak Gold project, located in Alaska close to its producing Fort Knox mine and mill. This looks like a great move for Kinross, and for $93.7 million it acquires an open pit project to leverage its existing mill and infrastructure. Peak Gold is expected to produce 1 million gold equivalent ounces over 4.5 years at low cash costs ($750/oz), according to a technical study.

SSR Mining (SSRM) and Alacer Gold (OTCPK:ALIAF) have reportedly closed on the previously announced merger of equals. Each of the issued and outstanding common shares of Alacer have been exchanged for 0.3246 of an SSR Mining common share. 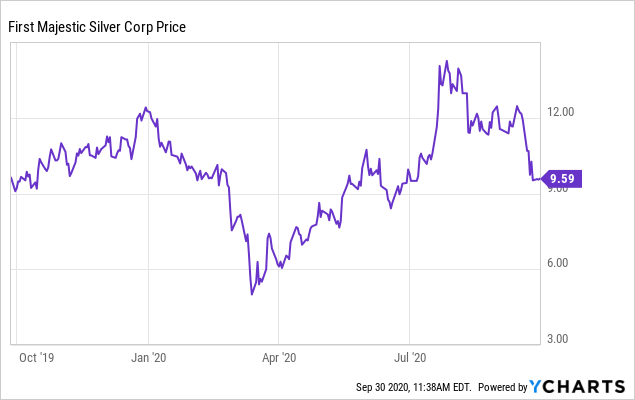 First Majestic Silver (AG) has raised C$78 million equity financing from billionaire investor Eric Sprott. The company issued 5 million common shares of First Majestic at a price of C$15.60 per share (US$11.70), which it will use to develop its mining projects, and for working capital.

So far, this has not been a well-timed move for Sprott as First Majestic’s stock is down more than 10% since the deal closed; First Majestic is disputing a recent negative Mexican court decision that has been weighing on its stock.

Sprott definitely views this as a long-term investment in silver, as First Majestic is highly levered to the metal. I think First Majestic will eventually get through the tax dispute with a positive resolution. For now, I’m keeping my BUY rating on the stock. 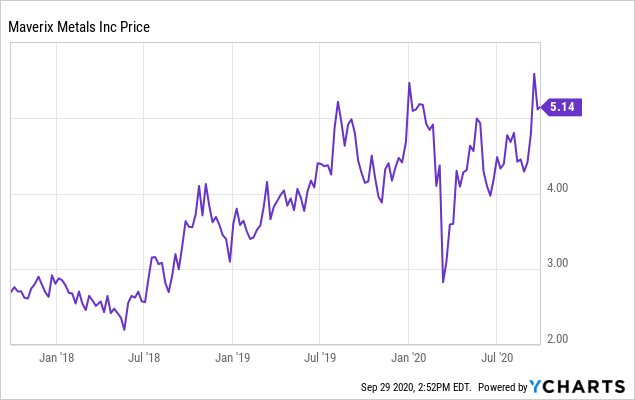 Maverix scored some high quality development royalties in the deal, including a 2% NSR royalty on Orla Mining’s Camino Rojo project, and a 1% NSR on Bluestone’s Cerro Blanco project. 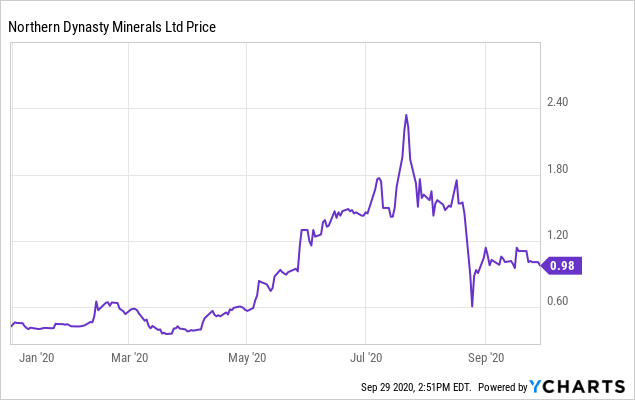 Northern Dynasty Minerals’ (NAK) CEO Tom Collier has resigned after he was caught on tape making comments about elected and regulatory officials in Alaska.

Northern Dynasty was also recently targeted by the NY-based short-seller J Capital, who said this in a recent report:

“We believe Northern Dynasty has crafted a money-losing mining plan to achieve government approvals. Since management is bonused on lobbying success instead of for producing minerals, NAK has no reason to care that the new plan is irrational: we think it will lose money, leave investors with a stranded asset, and be canceled anyway if Joe Biden is elected.”

Readers should be advised that Northern Dynasty is a highly speculative gold junior. Personally, I believe it has very low odds of ever getting its Pebble deposit into production, due to the high upfront capex requirements (which are likely to exceed $5 billion), and very strong environmental opposition and permitting challenges.

Northern Dynasty also does not produce any cash flows from operations, and will likely need to issue equity in the future to fund its development activities.

I help my subscribers find the best money-making opportunities in the gold & silver sector. If you want top gold & silver mining stock picks, subscribe now to The Gold Bull Portfolio.

Receive frequent updates on gold mining stocks, access to all of my top gold and silver stock picks and my real-life gold portfolio, a miner rating spreadsheet with buy/hold/sell ratings on 120+ miners.

I offer a 37% discount on annual subscriptions vs. monthly, with a 30-day money back guarantee!

Disclosure: I am/we are long KL, MMX. I wrote this article myself, and it expresses my own opinions. I am not receiving compensation for it (other than from Seeking Alpha). I have no business relationship with any company whose stock is mentioned in this article.