Fed Study: How We Made The Top 10% Richer Than Ever

Every three years, the Federal Reserve releases a study on consumer finances that is a stockpile of data on everything from household net worth to incomes. The 2019 Fed survey confirms statements I have made previously regarding how the Fed’s monetary interventions made the top 10% more prosperous than ever. They just left the vast majority of Americans behind.

While we will address the statistical data, there is also the anecdotal evidence that supports this thesis. Since 2008, there have been rising calls for socialistic policies such as universal basic incomes, increased social welfare, and even a two-time candidate for President who was an admitted socialist. Such things would not occur if “prosperity” was flourishing within the economy.

“The disparity between the Fed’s interventions, the stock market, and the real economy has become abundantly clear. For 90% of Americans, there has not been, nor will there be, any economic recovery.” 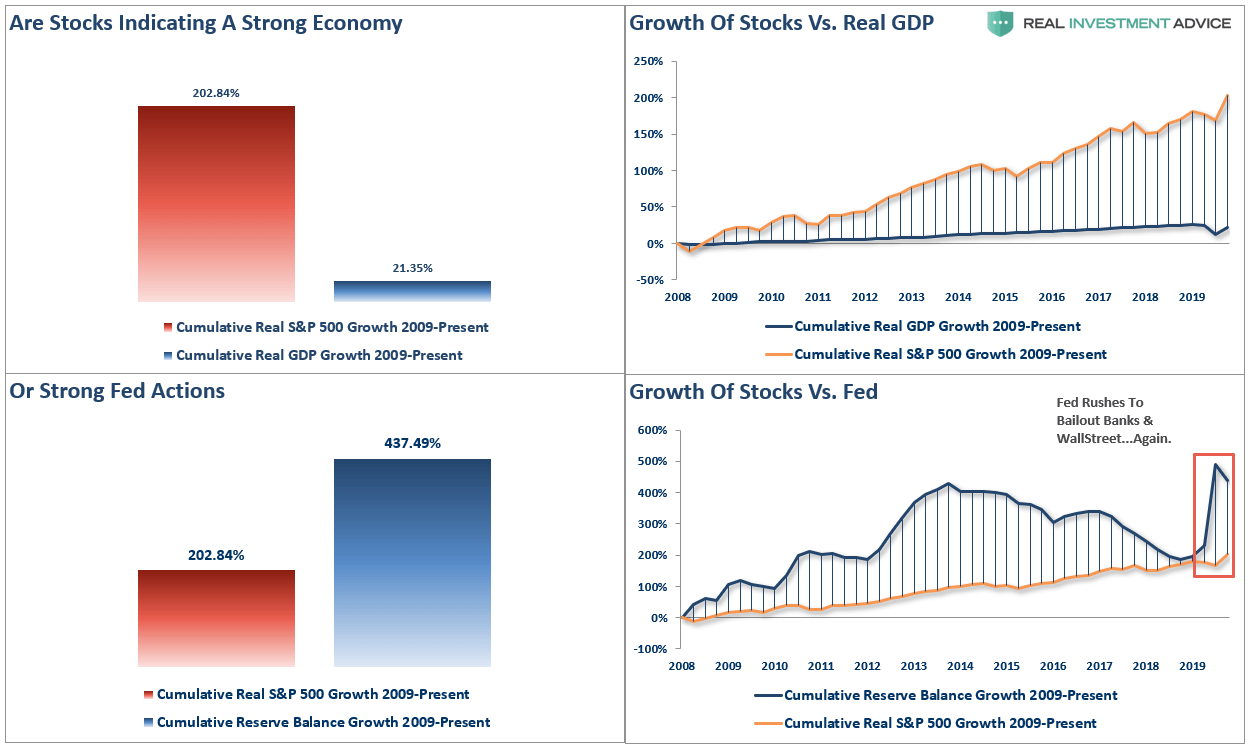 Stocks Are Not The Economy

Take a close look at the chart above.

Companies derive their revenue from the consumption of goods, products, and services they produce. It is logical that stock price appreciation, over the long term, has roughly equated to economic growth. However, that relationship has become unhinged since the financial crisis due to the Fed’s interventions and suppressed interest rates.

From January 1st, 2009, through the end of July, the stock market has risen by an astounding 203% or roughly 18% annualized. With such a large gain in the financial markets, there should be a commensurate growth rate in the economy.

While monetary interventions are supposed to be supporting economic growth through increases in consumer confidence, the outcome has been quite different.

Not really. As noted by the WSJ previously:

“As of December 2019 – before the shutdowns – households in the bottom 20% of incomes had seen their financial assets, such as money in the bank, stock and bond investments or retirement funds, fall by 34% since the end of the 2007-09 recession, according to Fed data adjusted for inflation. Those in the middle of the income distribution have seen just 4% growth.” – WSJ 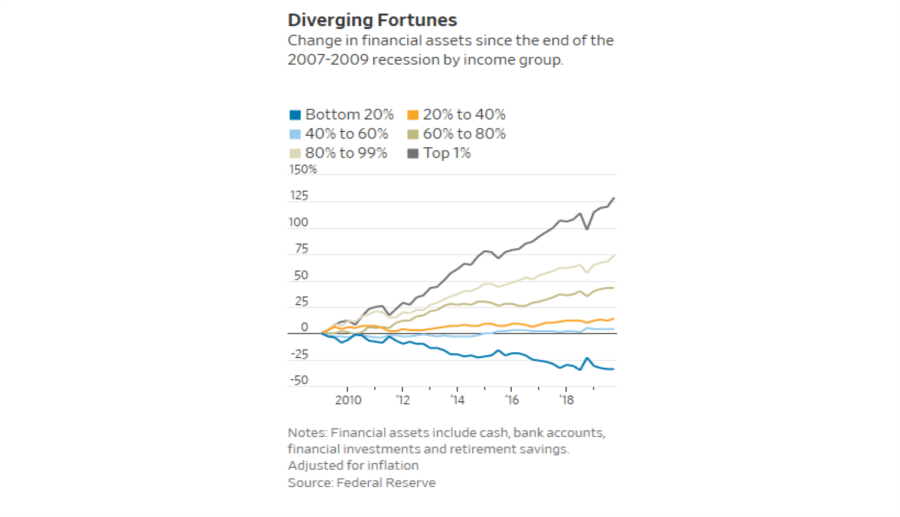 Such isn’t surprising. A recent research report by BCA confirms one of the causes of the rising wealth gap in the U.S. The top 10% of income earners own 88% of the stock market, the bottom 90% owns just 12%. 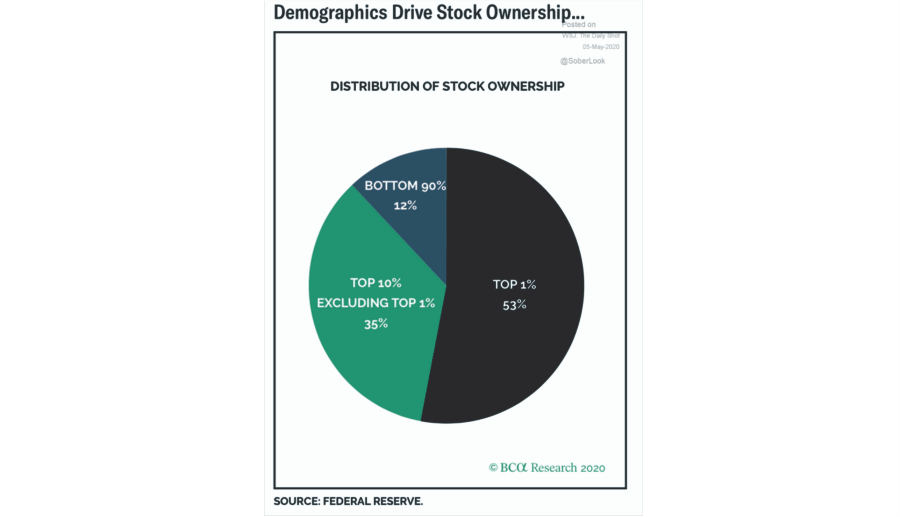 The Fed’s latest study on consumer finances confirms all of our previous assumptions.

While the mainstream media continues to tout that the economy is on the mend, real (inflation-adjusted) median net worth suggests that this is not the case overall. Despite surging asset prices, household net worth has only recovered back to 1998 levels. 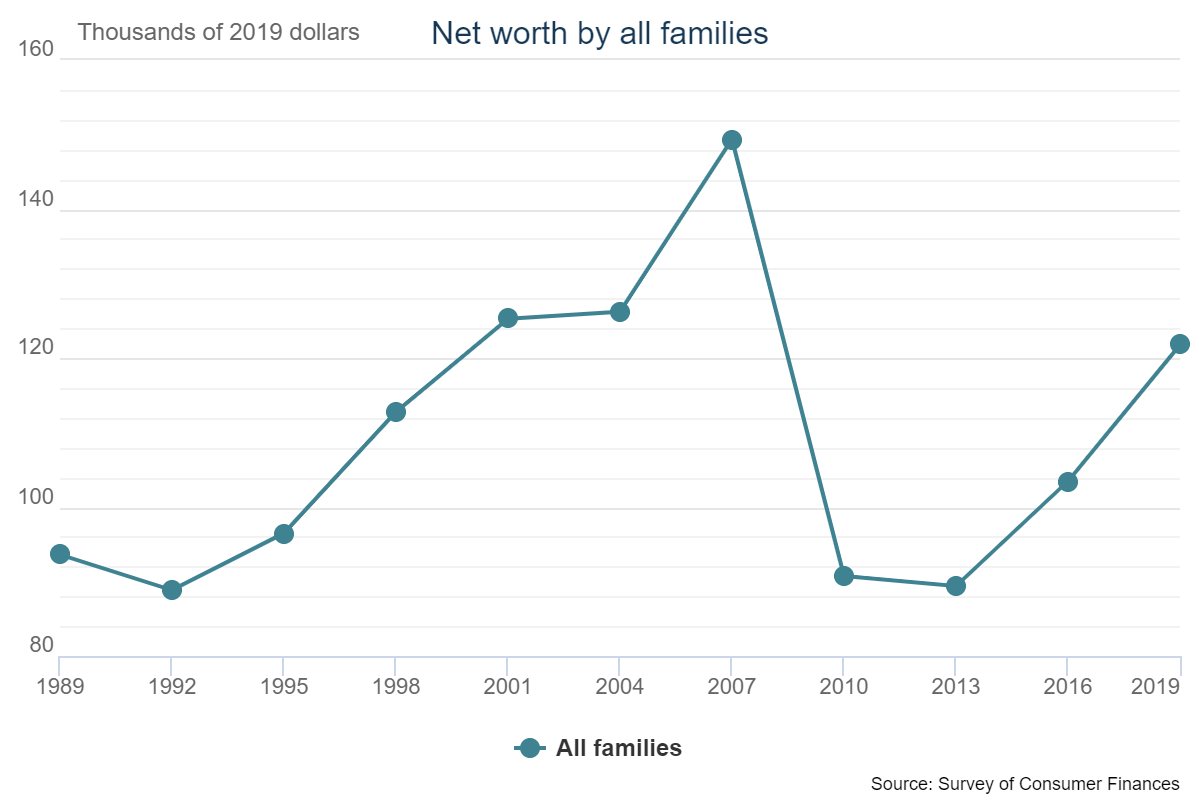 But even that view is highly optimistic as the recovery in net worth is the result of a heavy skew by the top 10% of income earners. 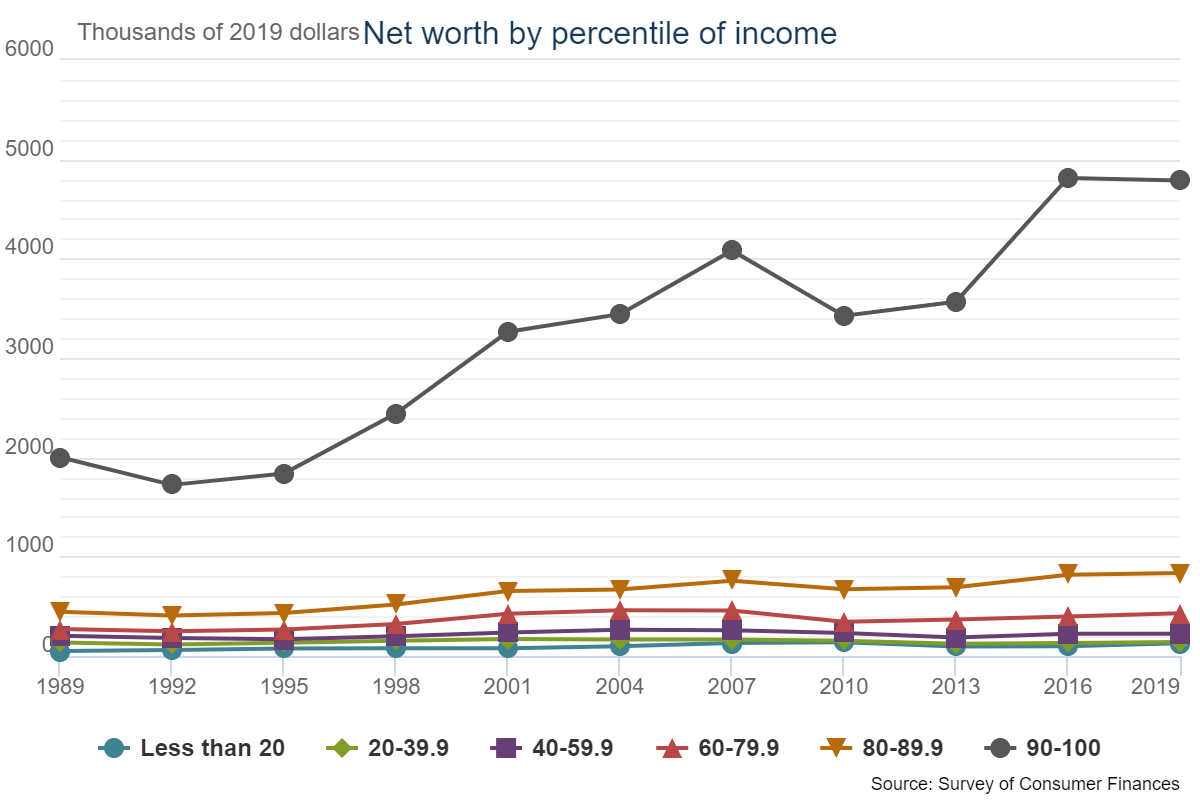 While many economists have tried to explain the plunging labor force participation rate (LFPR) was a function of “baby boomers” entering into retirement, such is hardly the case, given the collapse in the net worth of those in that age group. It’s not that they don’t want to retire; they just can’t afford to. 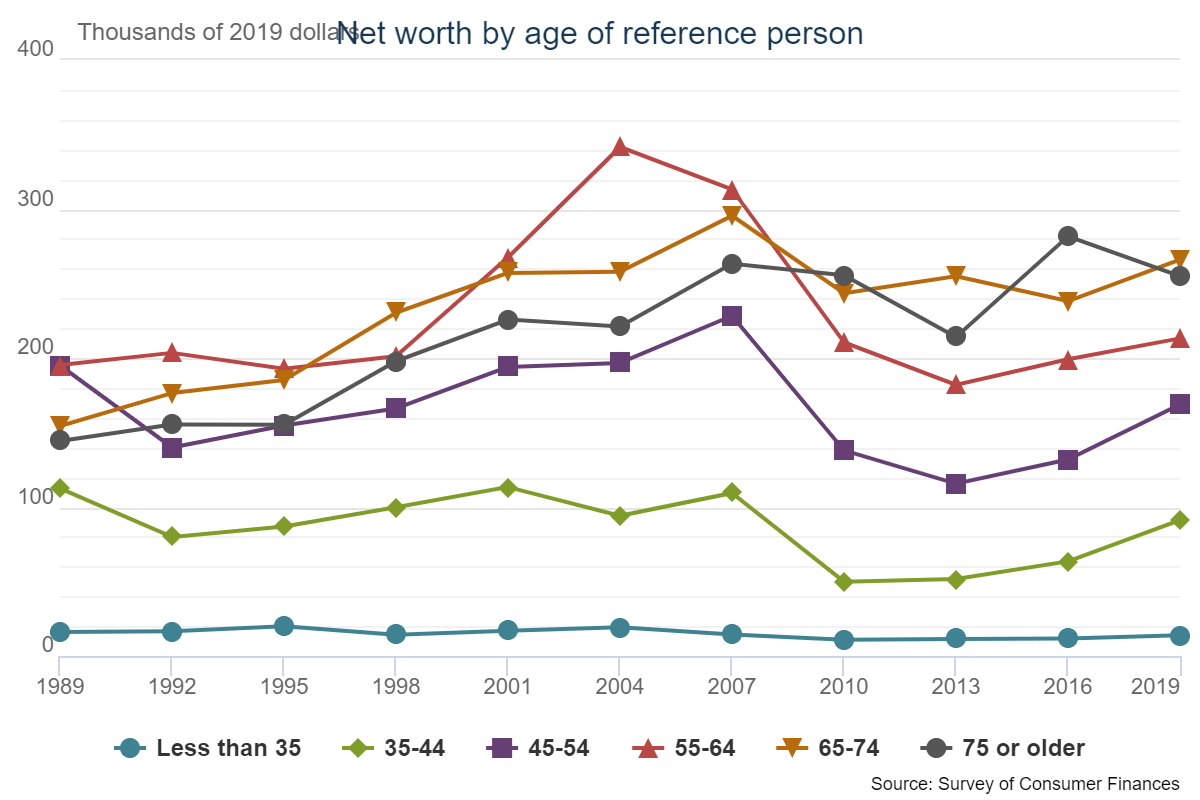 The “economic recovery” story is also too fragmented when looking at median incomes. According to the Fed survey, median household before-tax incomes have barely eclipsed where they were in the 2001 study. 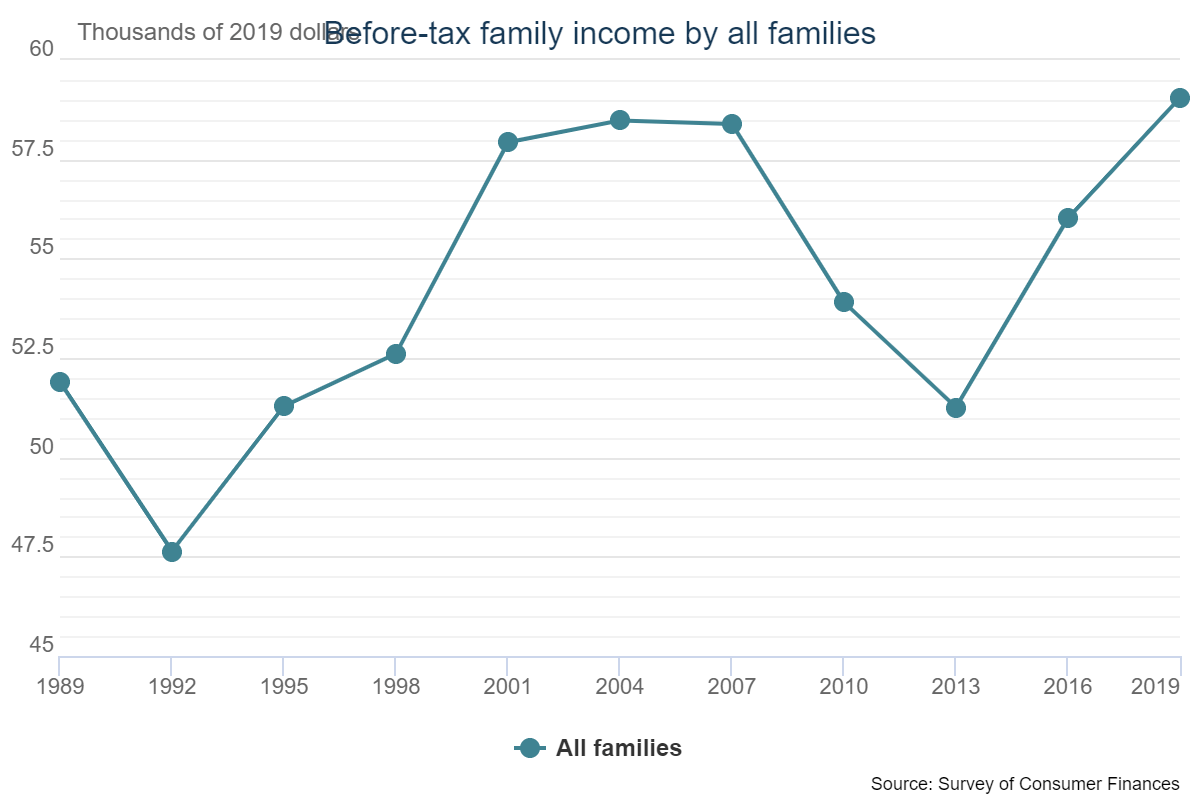 However, again, the real story becomes much more apparent when breaking incomes into deciles. 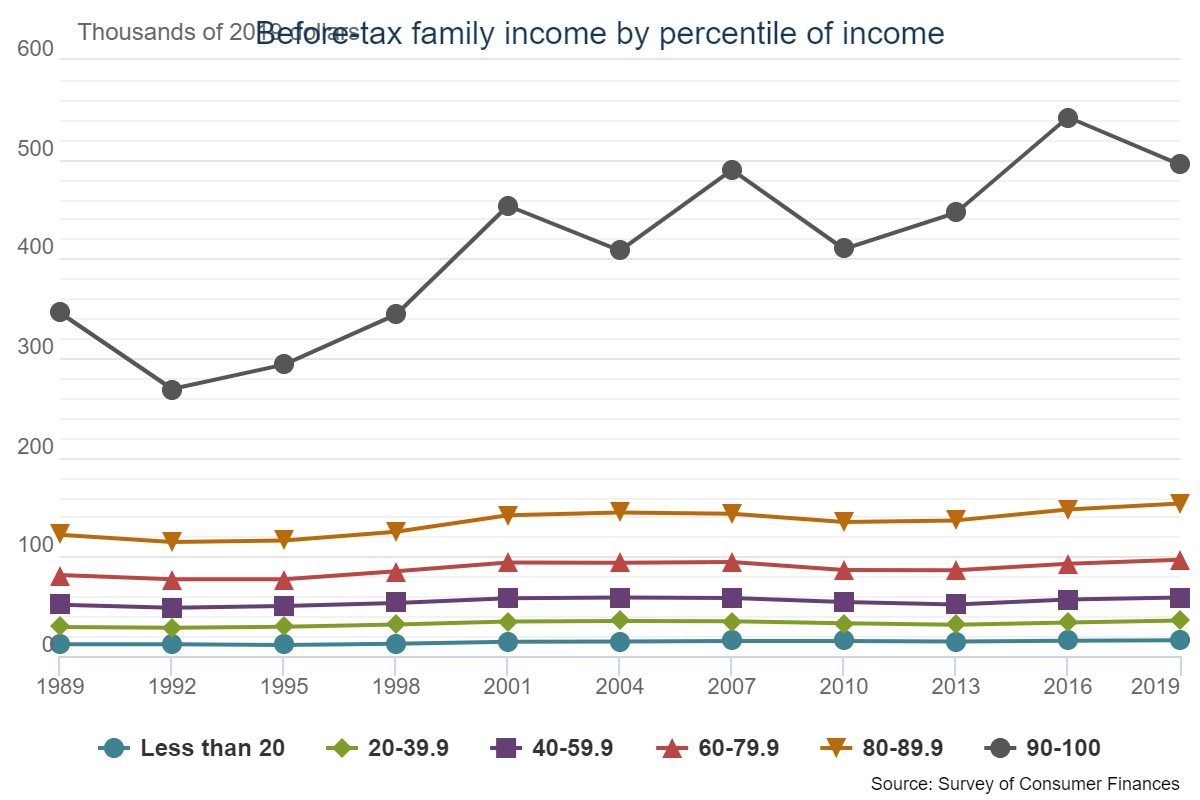 Interestingly, the only two age groups where incomes have improved since 2007 are for those in the top 20% of income earners. Again, this suggests the plunge in the LFPR is not a function of “retirement.” Individuals are working well into their retirement years, not because of a desire to, but due to necessity.

Despite the mainstream media’s rhetoric, the surging stock market, driven by the Federal Reserve’s monetary interventions, has boosted the overall economy. The reality is quite different.

Since most of the population either does not or only marginally participate in the financial markets, the “boost” has remained concentrated to the upper 10%. The Federal Reserve study breaks the data down in several ways, but the story remains the same.

The median value of financial assets for families has fallen sharply since the turn of the century. 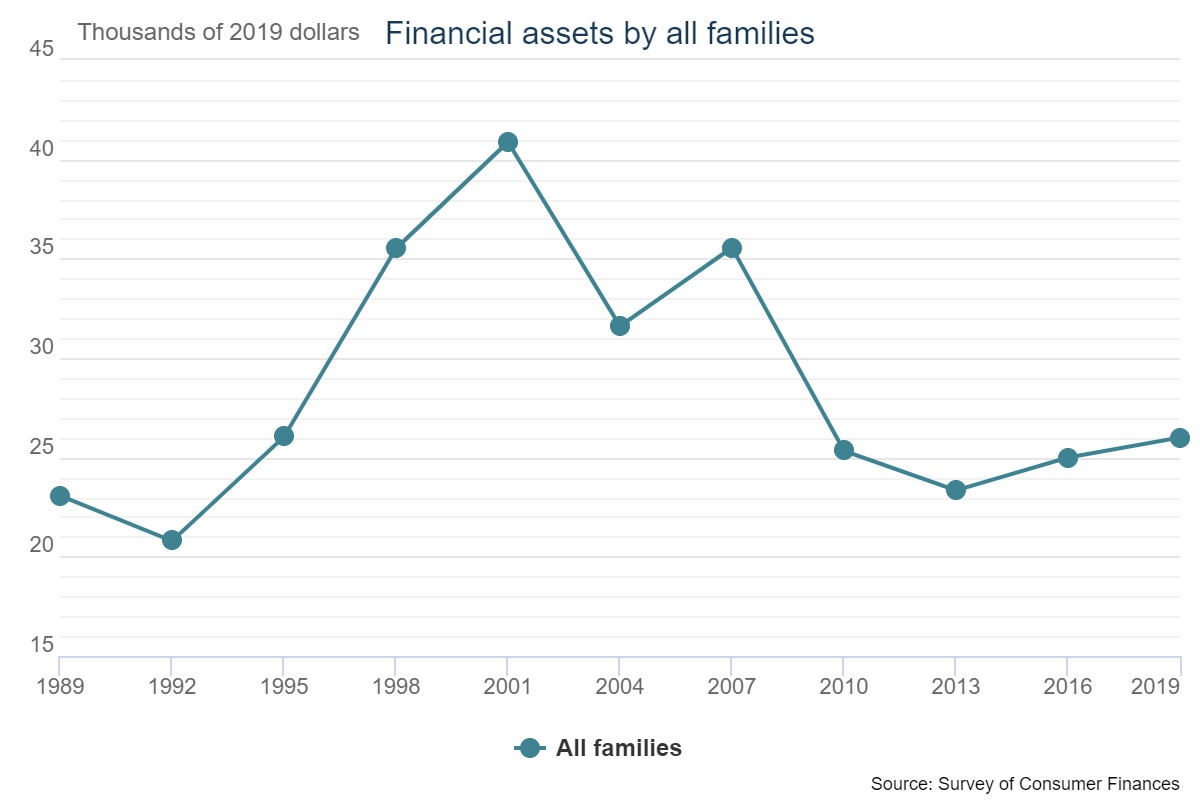 Except for those in the top 10 to 20 percent of income earners, of course. 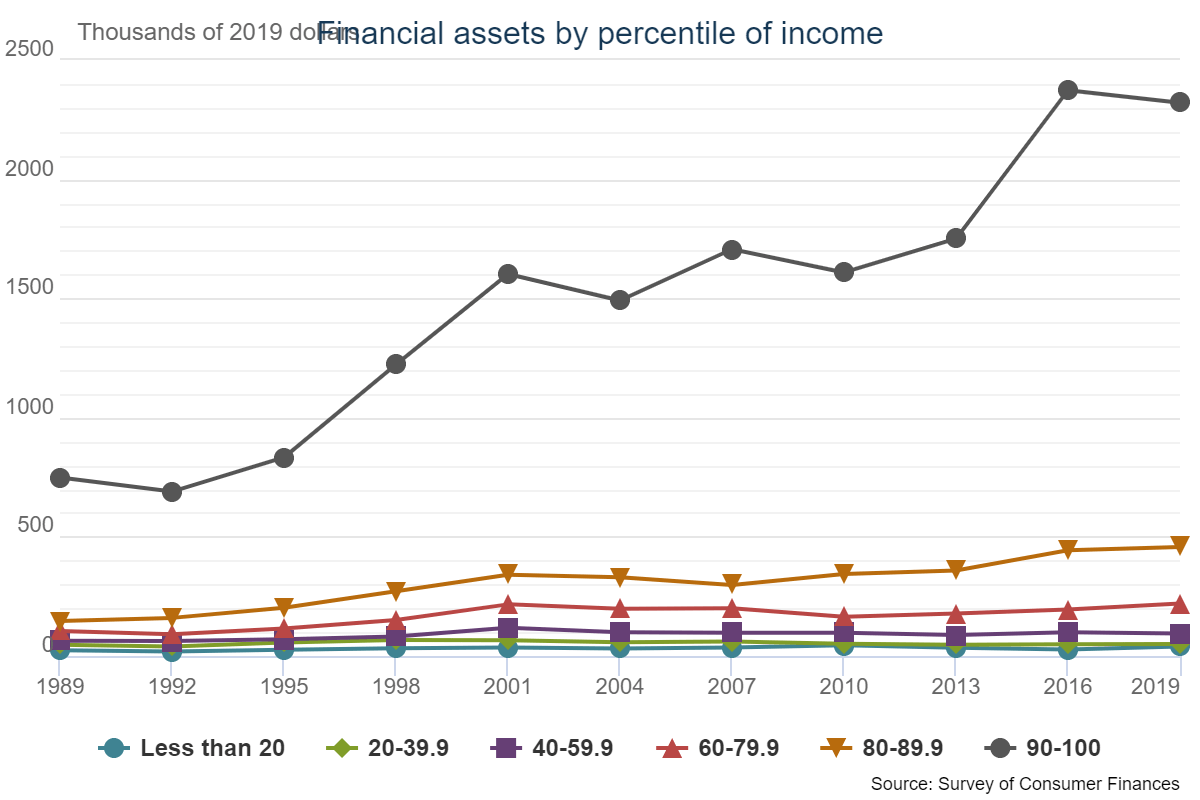 While the Federal Reserve hoped that inflating asset prices would boost consumer confidence, consumption, and economic growth, the problem is that with falling incomes and rising costs of living, the ability to save and invest eluded most families.

Again, the benefit of the Federal Reserve’s interventions remains concentrated in the top 10% to 20%.

When looking at the financial landscape of families, the future does not look bright. The percentage of families with retirement accounts is lower today than in 2001, despite surging asset prices. Again, this is a function of the disparity between incomes and the cost of living. 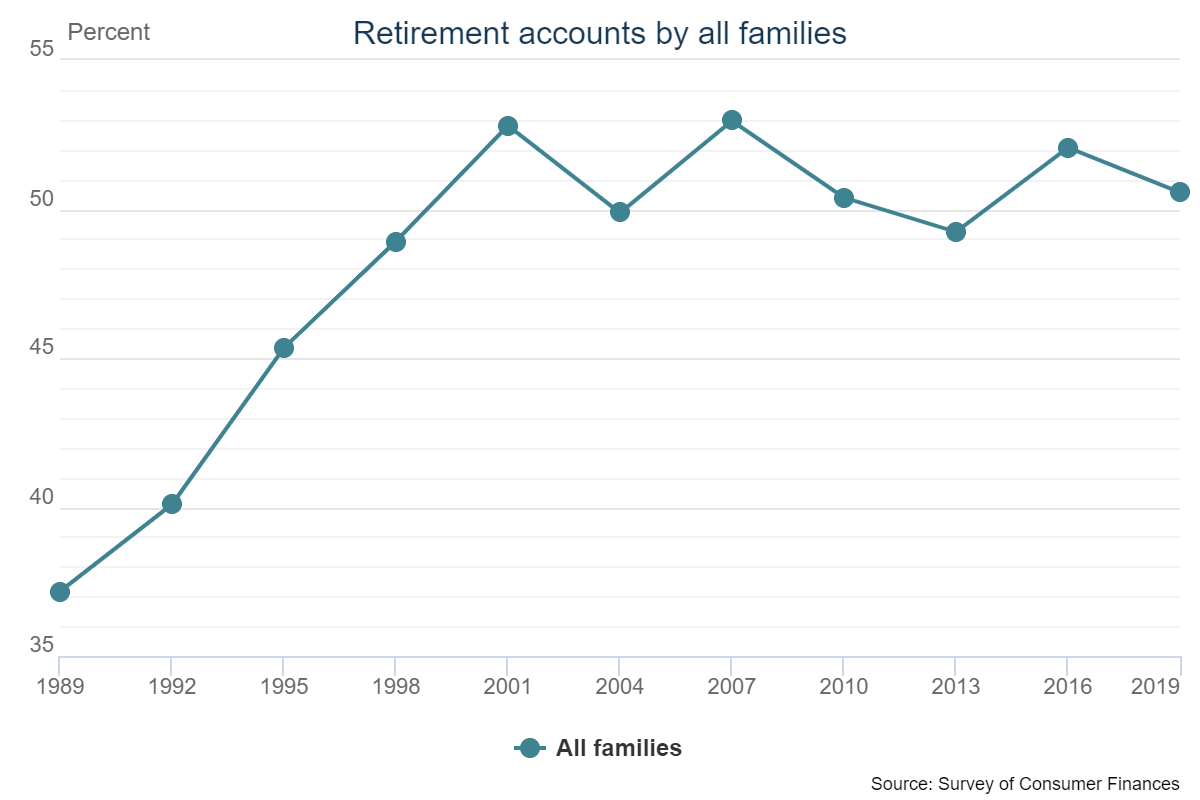 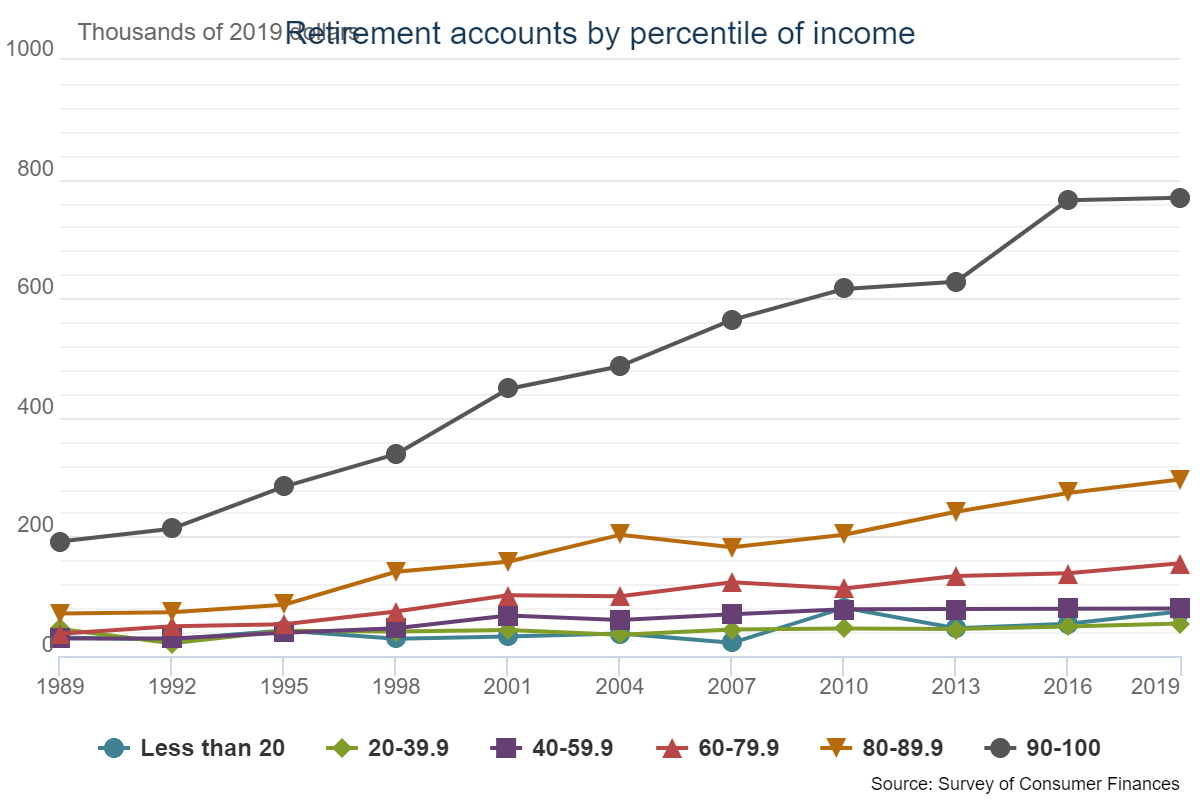 Lastly, as discussed previously, there is a deep flaw in the Bureau Of Labor Statistics adjustments to the employment report and little evidence to support the “birth/death” model, which has accounted for a large addition to job growth since 2009. The assumption is that each month individuals are either starting or closing a business. The BLS assumes “self-employment” doesn’t show up in the regular employment survey. The problem, however, is that the number of families that owned business equity has been on the decline since 1992. 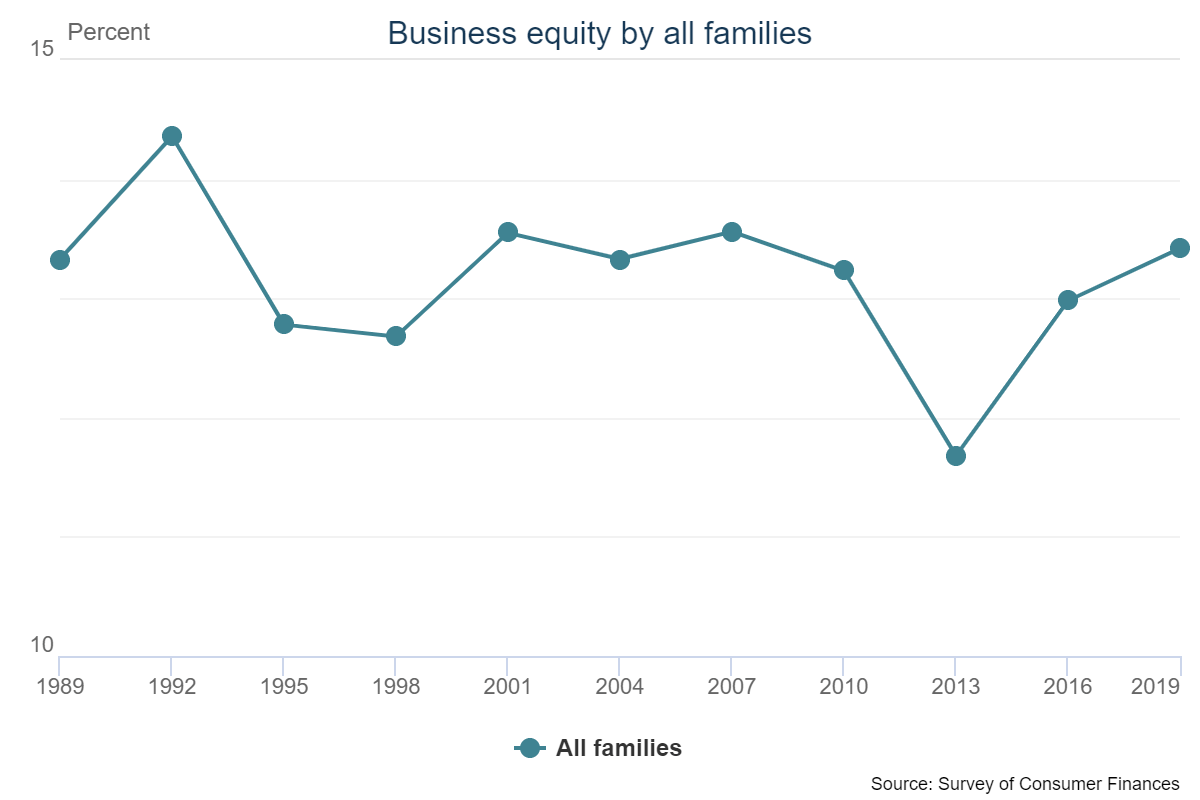 The lack of economic improvement is evident across all data points. However, it is the very policies of the current and past administrations which have fostered that wealth divide more than anything else. While the ongoing interventions by the Federal Reserve propelled asset prices higher and fueled the demand for risks, most American families were left behind.

The structural transformation over the last decade has permanently changed the financial underpinnings of the economy as a whole. Such would suggest the current state of slow economic growth is the new normal. As such, interest rates will remain stuck near the zero-bound, as demographics become destiny. 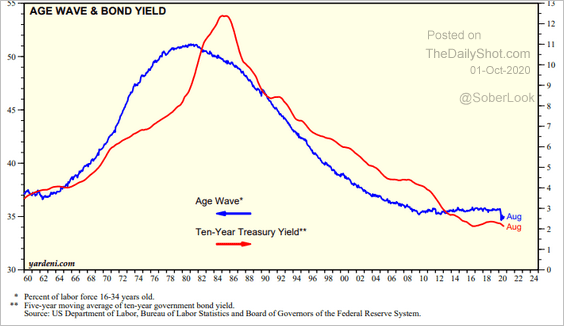 Such suggests the future will be marked by continued volatile equity market returns, and a stagflationary environment, as wages remain suppressed while costs of living rise.

The end game of three decades of excess is upon us, and we can’t deny the weight of the debt imbalances currently in play. The medicine the Federal Reserve is prescribing is a treatment for the common cold; in this case, a typical business cycle recession.

The outcome of those policies, while unintended, is destroying the bottom 90% of the population who suffer from “debt cancer.” Trying to solve a debt problem with more debt is akin to giving a patient “aspirin” for the pain. While such a prescription may temporarily mask the “pain,” it is not a “cure.”

If it were, then a rising percentage of Americans would not be supporting the idea of “socialism?”