We recently started buying in the most-hated sector in the market right now, which of course is energy. In fact, we are approaching overweight as we have been buying heavily in the last two weeks. Sure, demand is poor right now. Supply is ample. It is not going to turn around tomorrow, but for the medium to long term, in the mid-$30 range, we believe that Exxon Mobil (XOM) is a strong buy.

Make no mistake about it. Exxon Mobil has survived every major downturn in energy and emerged stronger each time. While pricing impacts revenues, expect Capex spending to focus on bringing new projects on-line, but these can be cut and done so dramatically if the situation worsens. With this flexibility, as we move forward, we expect substantial improvement in all segments, as oil prices have stabilized and started to rebound.

Investors will be further paid a 10% dividend yield at these levels, though that could be cut, which might be viewed favorably by the market. XOM is staring at a huge cash crunch as bets on rising demand sour, which will force the company to cut jobs and may put its dividend in jeopardy. That said, winter is coming fast, even though fall hasn’t hit yet, we are seeing SOME demand rising with back to work/school, more cars on the road, snow and cold weather already hitting parts of the US. Oil has fallen far and taken energy with it. We think you need to capitalize.

Naturally, the price of oil and gas is what pretty much drives revenue for the company, in addition to changes in volumes. As energy commodity prices move higher, Exxon Mobil makes more money. With that said, revenues have begun to fall this year along with energy prices. While volumes matter, as do movements in balance sheet line items, there is no denying the clear correlation with oil prices and revenues for the company. Oil prices rebounded from 2016 into 2019 but as we know were crushed in 2020 with COVID-19. The last two quarters have been rough, and the recent Q2 2020 revenues reflect this pain: 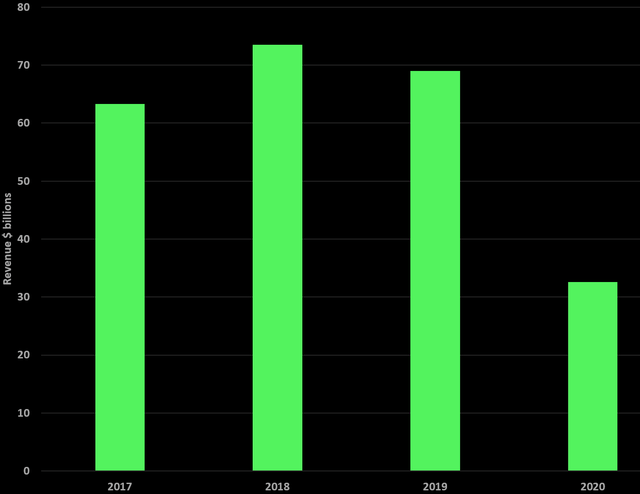 The trend was positive after recovering from the huge declines in energy prices in 2015-2016. Today’s pricing environment is down a tick from where it was to end Q2, but lest ye forget, oil went negative in Q2. The decline in oil prices directly led to revenue declines. Revenues fell to $32.6 billion from $69.1 billion last year, which is a decline of 53%. The results also missed the Street consensus by $5.5 billion. Let’s discuss why revenues were down.

As you are likely aware, oil and gas prices were pretty strong in 2018 and receded quite a bit in 2019, then collapsed in 2020 with COVID-19. Crude prices were highly volatile, whipsawing up and down in much of the quarter. Overall, they were lower versus a year ago, while natural gas prices were also volatile. This low commodity pricing weighed on segment performance. The oil price action hurt the company’s upstream operations versus a year ago, contributing to the overall revenue decline. This comes despite an increase in production upstream to 3,638 koebd.

When turning to the downstream side of things, industry fuel margins improved from the second quarter on stronger distillate margins in Europe and Asia Pacific. In addition, following the completion of significant refinery turnaround activity during the second quarter, scheduled maintenance activity was lower in the third quarter, so there was less downtime. However, the downtime was noticeable in early Q2, and this action, of course, contributed to a decline in revenues as there were lower petroleum product sales, while margins were also lower on average. As for the chemical side of the business, Exxon Mobil had weak margins.

Reasons to be positive moving forward

Buy when it is darkest my friends. There are a ton of bad headlines out there, and every one has been negative. We want to strike here. Despite these pressures, there is some reason to be bullish, especially WHEN pricing improves. The company recently started production on its new high-performance polyethylene line in Beaumont, Texas. The expansion increased plant production capacity by 65%, or 650,000 metric tons per year. Exxon Mobil is making investments that are beneficial to volumes, and the latter helps Exxon Mobil diversify in a green economy.

While operations were impacted by logistical restrictions resulting from COVID-19, the company demonstrated production capacity of 120,000 gross barrels of oil per day at the Liza Phase 1 development offshore Guyana. Topside integration is underway in Singapore on a second floating production, storage and offloading vessel, with production capacity up to 220,000 gross barrels of oil per day, to support the Liza Phase 2 development. During the quarter, Exxon Mobil also commenced operations at its new Delaware central processing and exporting facility in Eddy County, New Mexico.

This new processing and stabilization facility enhances the company’s integration advantages by collecting and processing oil and natural gas from its assets in the Delaware Basin for delivery to Gulf Coast markets. During the quarter, Exxon Mobil made significant progress on its previously announced capital and cash operating spend reductions. Planned reductions to the company’s capital investment program for 2020, from $33 billion to $23 billion, are ahead of schedule, reflecting increased efficiencies, lower market prices, and slower project pace. The expected decrease in cash operating expenses of about 15% is also ahead of schedule, capturing savings from increased efficiencies, reduced activity, and lower energy costs and volumes.

We will closely be watching the company’s expense management as we move forward. Obviously, if energy prices retract further, we expect Exxon Mobil will take even more severe cost-cutting measures like it did in 2015. When factoring in the revenue result and all sources of expenses, earnings per share fell nastily from last year: 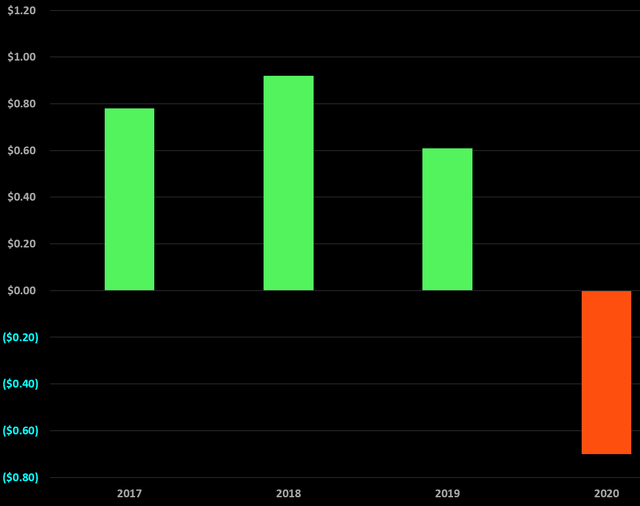 This was expected given the revenue hit, though we argue that the company can still do a better job of managing expenses. That said, despite the major pressure on revenues, the lower-than-expected expenditures led to the company beating EPS estimates. On an adjusted basis, EPS missed consensus estimates by $0.10, losing $0.70. Although the EPS trend in the charts looks bad, we are looking ahead to 2021 and we believe the stock is attractively priced.

Looking ahead, we really expect substantial improvement in all segments as oil prices stabilize, if not rebound. However, revenues will be disastrous if we see $30 oil for an extended period of a few quarters. At $45-55 oil, we love the name, as it operates profitably. Obviously, the higher the commodity goes, the better. As such, oil and gas bears should pass on this name, but we still believe this is a solid name for traders to consider, as well as dividend yield hunters, though without a catalyst, the dividend could be cut, which the market might factor in positively.

When we factor in YTD performance and consider there are no major catalysts one way or the other coming immediately, we see value under $40 per share. We see oil rebounding. In fact, if oil can get back into the mid to high $40 range, we still see a profitable 2021. Our target for 2021 is $55 oil. Based on our assumptions and the performance of the company in the most recent quarter, we are now targeting 2021 revenues of $205-240 billion. We also expect non-GAAP EPS $1.50-$2.50. However, it does depend on energy. Still on the low end, at $36 a share, that is still 24X forward EPS, which is attractive we believe, but is highly attractive at the higher end, which is 14.4X. Obviously, value improves as share prices decline here.

If you enjoyed reading this column and our thought process, you may wish to consider joining the community of traders at BAD BEAT Investing. 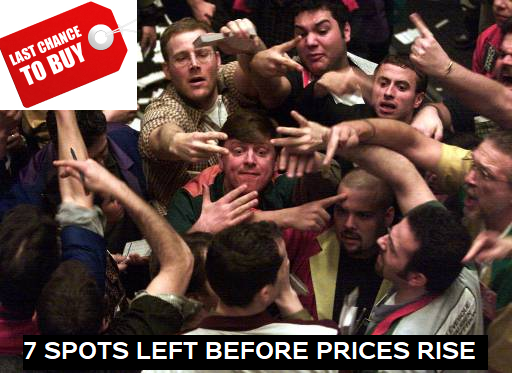 We are available all day during market hours to answer questions, and help you learn and grow. Learn how to best position yourself to catch rapid-return trades.

Disclosure: I am/we are long XOM. I wrote this article myself, and it expresses my own opinions. I am not receiving compensation for it (other than from Seeking Alpha). I have no business relationship with any company whose stock is mentioned in this article.