Energy Transfer (ET) units have long been weighed down by several concerns. Now there appears to be a “piling on” by the environmental crowd and other challenges as well as a long overdue transition near the top to accommodate a very different market environment. A quick solution to the company problems is very unlikely because large companies tend to change very slowly. Therefore a model along the lines of Kinder Morgan (KMI) that I have covered in separate articles appears appropriate. That would mean that “righting the ship” would take several years as Kinder Morgan spent several years repaying debt after cutting the dividend while selling some divisions and exiting Canada.

The market appears to be “piling on” concerns while Energy Transfer attempts to find a satisfactory strategy for the future. One of these concerns is the attempted discounting to fill pipelines. Even though the business is based upon long term contracts, the market worries over a temporary lull in demand. Yet that lull would have to exist for a few years to have a material long term effect on the business.

Another worry in the “piling on” would be the attempt by Chesapeake Energy (OTCPK:CHKAQ) to cancel the contract it has with Energy Transfer. Chesapeake has made that request in bankruptcy court. Generally such a legal move begins a series of bargaining sessions that would result in a new contract closer to current market pricing. Nonetheless, should Chesapeake Energy want out of a contract that it can prove is onerous, then bankruptcy court is the place for that proposal. Even should the worst happen, the cost to Energy Transfer appears to be at most $300 million.

Contrarian investing is certainly a possible strategy for this company as Energy Transfer debt is investment grade and the company is unlikely to go bankrupt. However, those looking for a bounce-back in a year or two need to take into account that other large companies that have gotten themselves into significant predicaments with the market rarely rally that quickly. It can happen of course. But the odds of a relatively “quick fix” are not good.

Still the potential returns could prove enticing for some at the current level despite the fact that the units may still go lower before they go higher. The urge for many investors to invest at the bottom of a pricing cycle is quite strong. But such an urge can lead to significant disappointment and an equally strong urge to get out at “breakeven” right about the time that the long term gains are likely to beginning to be realized.

Therefore any investor needs to ask themselves whether or not a potential three year delay in gains with a larger than expected distribution cut would be an acceptable intermediate outcome before they invest. Otherwise an investor would be very likely to think something went wrong with the investment strategy because the price continued to drop and a distribution cut was more than expected.

Since I began covering Energy Transfer (sometimes jointly with Rida Morwa), this company has disappointed several times on projected debt repayments leading to a decline in total debt with an improvement in key debt ratios. In the beginning of the fiscal year, the company sold both debt and preferred stock. Preferred stock is a particularly expensive way to finance anything as preferred distributions are not deductible whereas interest expense is a deductible item. Therefore even entities that issue K-1’s need to pay attention the possible future implications of preferred stock.

In the meantime, more operating risk has been introduced through the move to co-CEO’s from the long time leadership of Kelcy Warren. Investors can add this to the list of market “piling on” concerns. Mr. Warren will remain as Executive Chairman and Chairman of the Board of Directors. This transition will be crucial as a founding member of the company is now gradually stepping away from operations. Many companies do not make this transition successfully and co-CEO’s are usually an unstable way to run a company. 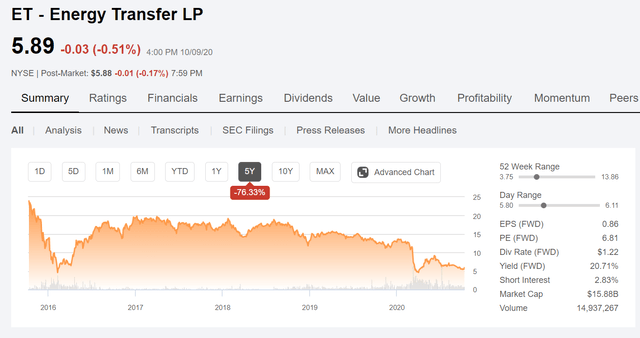 This transition may have been motivated by all the factors that are causing the long term decline in the price of the common units. Note that these units have been in a downtrend long before the current coronavirus demand destruction. The shares did bounce-back somewhat after the 2016 industrywide dip. But increasing share price over historical levels (as in 2015 and before) does not appear to be in the future for the time being.

Much of that price action can be attributed to a market movement towards lower midstream debt levels embraced by competitors such as Kinder Morgan (KMI) and fought “tooth and nail” by the management of Energy Transfer. The varying strategies have left Kinder Morgan in a position to grow dividends and cash flow in the future while Energy Transfer faces an increasing urgency to reduce the balance sheet debt.

Note that the management change announced was received positively by the market. However, the long term trend remains until the new management establishes a very different track record going forward.

Now the environmental crowd appears ready to attack the company’s safety record in the building of the Mariner East II pipeline. Supposedly a “whistle blower” has now surfaced to testify in a lawsuit about irregularities concerning the reporting of some aspects of the Mariner East II pipeline. There have already been numerous fines and more than one construction halt for this pipeline in the past. The result is that Energy Transfer has become one of the most fined companies in the state of Pennsylvania. Many other industry companies manage to operate in the state without incurring all the fines and negative publicity of this company.

The Dakota Access Pipeline construction faces its own challenges. The appeals court has allowed the pipeline to continue to operate but has also upheld a voided permit that is needed by the pipeline. The district court will be reviewing the order to “empty the pipeline” while the environmental impact study is done with new guidelines from the appeals court. But part of this process will be the safety record of the company. All those fines in Pennsylvania are part of the safety record of this company. Plus there have been leaks in the North Dakota project in the past. Obviously the court will have to determine the importance of the history. But it is clear that management is not helping itself any with the track record available to the court.

Energy Transfer has needed a management change for some time. The management in charge for a long time has gotten this company into some significant disputes. Furthermore the decision to deleverage the company balance sheet has been delayed far too long. The deleveraging process is likely to take a few years. Mr. Market may not be very patient about the debt load reduction time needed either.

The company faces a potentially significant situation with the Dakota Access Pipeline project where the liability could easily run into the billions in the event of an unfavorable ruling. Meanwhile the Mariner East II project has attracted a lot of unfavorable press in a state that has had an oil and natural gas industry since the birth of the nation (roughly).

The coronavirus demand destruction has added yet another uncertainly to an already long list of uncertainties.

Mr. Market knows there is a lot of work to be done here but is very unsure of the long term liability or the repair strategy needed to fix the situation. It probably is worth waiting for many of the future liabilities to become properly quantified before investing. Then again the unit price is at a level where some of the more venturesome investors may decide to shoulder the uncertainties that lie ahead. Those investors need to be aware that the common units are as likely to decline as they are to increase on various news items until the future becomes more certain.

I analyze oil and gas companies and related companies like Energy Transfer in my service, Oil & Gas Value Research, where I look for undervalued names in the oil and gas space. I break down everything you need to know about these companies — the balance sheet, competitive position and development prospects. This article is an example of what I do. But for Oil & Gas Value Research members, they get it first and they get analysis on some companies that is not published on the free site. Interested? Sign up here for a free two-week trial.

Disclosure: I am/we are long kmi. I wrote this article myself, and it expresses my own opinions. I am not receiving compensation for it (other than from Seeking Alpha). I have no business relationship with any company whose stock is mentioned in this article.

Additional disclosure: Disclaimer: I am not an investment advisor, and this article is not meant to be a recommendation of the purchase or sale of stock. Investors are advised to review all company documents and press releases to see if the company fits their own investment qualifications