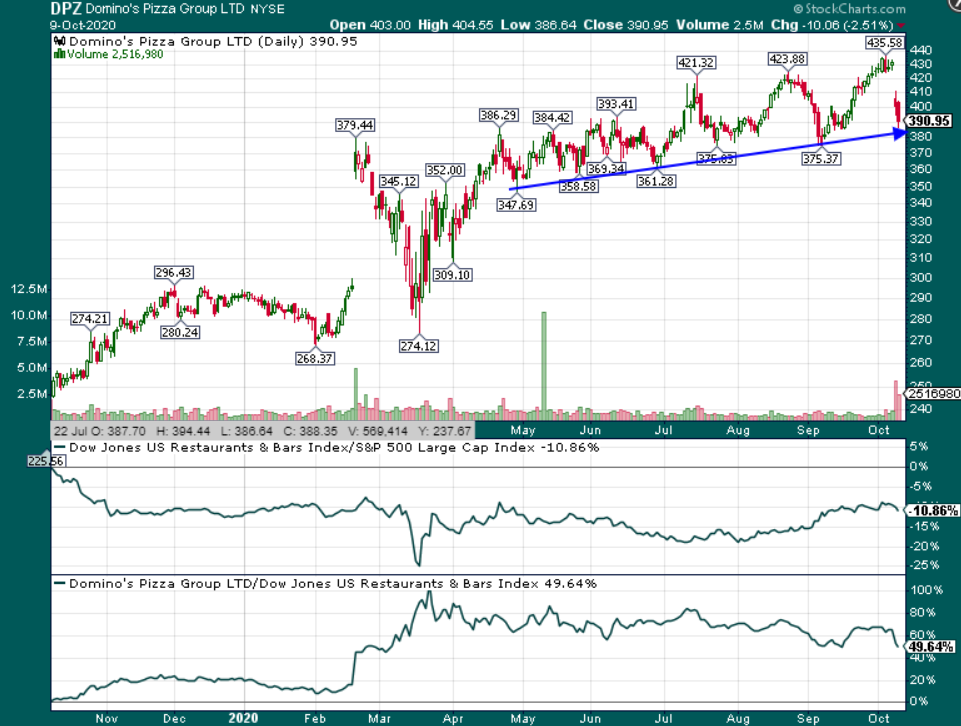 US stores posted a staggering 17.5% gain in comparable sales in Q3, building upon a much more pedestrian 2.4% gain in the year-ago period. Not only does this have the tangible benefit of moving revenue much higher, but it also means that the gains Domino’s made in terms of revenue during the initial stages of the pandemic are sticking around. Large portions of the economy in the US have returned to some state of normalcy, and consumers have many more options to eat away from home than they did back in March and April. However, this hasn’t stopped Domino’s, and it appears to me that most or all of what the company gained earlier this year is here to stay. That’s critically important because it means the growth trajectory for Domino’s would have moved up more quickly than it otherwise would have.

International same-store sales came to +6.2%, excluding currency impacts, building upon a 1.7% gain in the year-ago period. The problem is that management said further growth in the international business was going to be tricky for the rest of the year, causing the share price to fall. However, the US business is so strong, and the international business has such a good foundation that even if this rather dire prediction comes to fruition, it isn’t like Domino’s will suddenly be struggling. We’re talking about perhaps coming off nosebleed same-store sales levels, not a wholesale shift in the way the company does business. I think investors are far more alarmed about this than they need to be.

Operating margins declined slightly, from 17.4% of revenue in the year-ago period to 16.8% in this year’s Q3. I never want to see margin declines, particularly when revenue is rising and should be providing additional cost leverage. However, the company paid out performance-based bonuses in Q3, and it had COVID-related costs, such as supporting frontline workers through safety measures and sick time. These things should, to some extent, be transitory as bonus goals are reset each quarter/half year/year as appropriate. In addition, COVID-related measures should at least decrease in volume as the virus is eventually defeated.

Domino’s is blasting past what it could have expected to produce in terms of revenue this year, and it is rightly paying for that performance. However, that won’t be the case forever.

Earnings were up 15% on a dollar basis in Q3, with the strength we’ve already looked at somewhat offset by higher interest expense. Domino’s has a substantial amount of debt, and its interest expense rose from $33 million in the year-ago period to $38 million this time around. Considering the total increase in earnings was $13 million year over year, an additional ~$5 million in interest expense is meaningful, and something to keep an eye out for. I don’t think it changes the bull case, but it is significant nonetheless.

Domino’s has continued to buy back stock, and in the past year, it has reduced its share count from 42 million to 39.8 million. That helped juice EPS, which rose 21.5% year over year despite a smaller increase in revenue and indeed in dollar earnings.

If we consider the reaction the market had to Domino’s at a time when it reported 21%+ EPS growth, it seems a bit odd. I get the reaction was due to guidance and not necessarily the quarter itself, but the actual results being produced must matter.

However, that suits me just fine as we can see the valuation has improved since my last report on Domino’s, thanks to the post-earnings selling. Shares trade at 30 times forward earnings, which sounds steep, but considering the strength Domino’s has shown, as well as these eye-popping growth numbers, I simply don’t see any cause to be bearish here.

I think the selloff after earnings is a chance to pick up shares more cheaply than could be done a few weeks ago, and I still see Domino’s as a buy.

Disclosure: I/we have no positions in any stocks mentioned, but may initiate a long position in DPZ over the next 72 hours. I wrote this article myself, and it expresses my own opinions. I am not receiving compensation for it (other than from Seeking Alpha). I have no business relationship with any company whose stock is mentioned in this article.