Devon Energy (DVN) was already well-placed to withstand weak oil prices and now, after merging with WPX Energy (WPX), the shale oil producer will likely emerge even stronger from the downturn. The merger will allow Devon Energy to maintain its financial health while delivering more than $500 million in cost savings and pushing its cash flow breakeven price to just $33 per barrel. The new company, which will be one of the biggest shale oil producers, will be able to generate strong levels of free cash flows in a low oil price environment. Moreover, Devon Energy will also reward shareholders along the way as it adopts a fixed-plus-variable dividend model.

Devon Energy and WPX Energy have recently announced a merger through a $12 billion all-stock deal, expected to close in the first quarter of 2021. Under the terms of the deal, WPX Energy shareholders will receive 0.5165 shares of Devon stock against each WPX Energy stock. Following the completion of the merger, the existing Devon Energy shareholders will own 57% of the new Devon Energy while WPX Energy will own the remaining 43%. The transaction has already been unanimously approved by the boards of directors of both companies. This deal will give birth to one of the largest shale oil producers in the US, pumping well over 500,000 boe per day, making it substantially bigger than other major E&Ps like Pioneer Natural Resources (PXD), Apache Corp. (APA), and Diamondback Energy (FANG) in terms of output.

I think the deal has improved Devon Energy’s outlook. In my previous article which was written before the merger announcement, I wrote that Devon Energy can withstand the downturn and post robust earnings and cash flow growth when oil prices eventually recover. After completing the merger, Devon Energy will now emerge stronger from the down cycle, one that can generate superior returns at low oil prices.

The merger will immediately lift the company’s earnings, cash flows, and free cash flows higher on a per-share basis. Moreover, since this is an all-stock transaction, Devon Energy will be able to preserve its financial health. I previously highlighted that Devon Energy benefits from having excellent liquidity. The new company will also continue to have that advantage, with around $1.7 billion of cash on hand and $3 billion available from the revolving credit facility. The strong cash position will make it easier for Devon Energy to achieve its $1.5 billion debt reduction target.

All shale oil producers, including Devon Energy, have achieved operational and production efficiencies while pushing their costs lower in the last five years. As a result, companies like Devon Energy are still standing strong today despite facing weak and volatile oil prices since early-2015. However, Devon Energy needed to further improve its cost structure to generate strong returns in a persistently low oil price environment. This will also put the company in a better position to deliver superior free cash flows than other E&Ps at low oil prices. The free cash flows can then be used to create value for shareholders through dividend growth and debt reduction. I think Devon Energy has already picked the low-hanging fruit and now consolidation is the only way through which it can achieve meaningful efficiency gains and cost reductions. 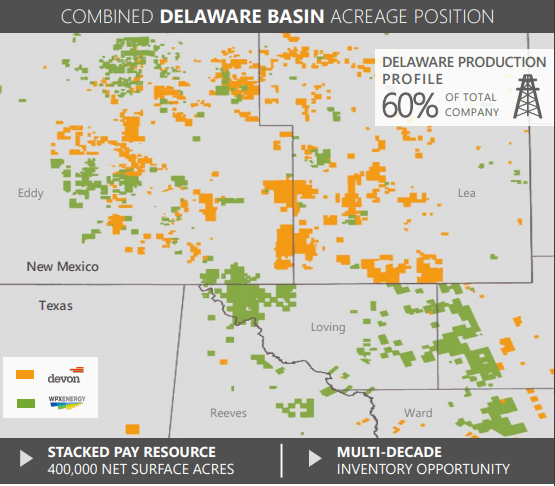 Both Devon Energy and WPX have substantial assets at the Permian Basin’s Delaware oil play. Moreover, their oil assets are located in close proximity of each other, as shown in the image above. The merger, therefore, allows Devon Energy and WPX to scale up their Delaware Basin operations, share resources, make their operations more efficient, and reduce costs. The two companies are eyeing substantial synergy benefits and expect to realize annualized cost savings of $575 million by the end of next year. The new entity’s cash flow breakeven point will fall to $33 per barrel.

This means that at $33 oil, the company will generate enough cash flows to fully fund its capital expenditures while holding production flat. Therefore, in the current high-$30s to low-$40s a barrel oil prices, I expect the new Devon Energy to generate strong levels of free cash flows. At $40 to $60 oil, Devon Energy plans to report robust free cash flow yields of 8% to 31%. Note that this is substantially higher than Devon Energy’s current dividend yield of 4.5%. This implies that at $40 oil, the dividend will get fully covered by free cash flows. At higher oil prices, the company will report strong levels of cash flows in excess of capital expenditures and dividends. This excess cash can then be used for funding debt reduction or dividend growth.

What I like about Devon Energy is that the company isn’t targeting double-digit production growth anymore. Instead, it has said that it will hit 5% annual production growth, at best, over the long term. The company will limit the reinvestment of cash flow from operations at 70%-80% under all oil price scenarios. This shows that in a high oil price environment of $50 a barrel or above, the company would prefer to generate strong levels of free cash flows. As a result, during up-cycles, the company will have ample excess cash which will be used mainly to create value for shareholders.

Devon Energy has adopted a “fixed plus variable” dividend model under which it will continue paying a fixed quarterly dividend of $0.11 per share and during good times, when it accumulates more than $500 million of cash, it will reward shareholders with a variable dividend (as long as it doesn’t need to use the cash for debt repayments). This approach can potentially make Devon Energy a great dividend stock, one that pays a base dividend that might be higher than the S&P 500 average of ~2% throughout oil price cycles and an attractive variable dividend when oil prices rise. I think shareholders will likely take a wait-and-see approach. It’s easy to make promises but the company will have to show discipline when oil prices recover to $50 or higher and resist the temptation to aggressively grow production.

Moving forward, I think we may see additional consolidation in the industry and the M&A activity will likely pick up. The Devon-WPX merger is the second major deal we’ve seen this year after Chevron‘s (CVX) $5 billion acquisition of Noble Energy (NBL). Oil companies like ConocoPhillips (COP), EOG Resources (EOG), and Pioneer Natural Resources, who benefit from having a rock-solid balance sheet might deploy their financial muscle to acquire acreage and expand their footprint around their existing assets. The energy companies will likely engage in deals that will help them push their key per-share financial metrics higher and costs lower. Distressed companies, such as Centennial Resource Development (CDEV) as well as the well-managed operators like Parsley Energy (PE) could be potential takeover targets.

If the M&A activity continues, then by the end of the next couple of years, we may have fewer but stronger energy companies, those that can generate solid returns and free cash flows at low oil prices, reward shareholders with dividends throughout oil price cycles, and compete more effectively on a global stage with OPEC.

It’s also good to see E&P companies, after years of burning cash flows, are now making free cash flows-powered dividends a key aspect of their business models. Pioneer Natural Resources has already adopted a variable dividend policy and now Devon Energy has done the same. I think more shale oil and gas drillers might follow in their footsteps. This will be a big turnaround for the E&P companies which, until a few years ago, weren’t classified as dividend-paying stocks. Until a few years ago, only a handful of independent oil producers offered a competitive dividend but this will likely change substantially in the near future.

As for Devon Energy, I think the company is now looking even better. It is well-positioned to grow earnings and cash flows while generating superior levels of free cash flows at low oil prices, which should have a positive impact on Devon Energy stock. The company’s shares have fallen by 17% in the last three months and are currently trading 4.84x in terms of EV/EBITDA multiple, below the sector median of 7.3x, as per data from Seeking Alpha Essential. I think investors should consider buying Devon Energy stock.

Note that Devon Energy carries above-average levels of debt, which makes it a higher-beta play than other oil producers like Pioneer Natural Resources who maintain a strong balance sheet. Devon Energy ended 2Q20 with a total debt of $4.29 billion which translates into a lofty debt-to-equity ratio of 133%, higher than the peer median of 60%, as per my calculation. The company is facing merger-related risks as well. If Devon Energy fails to smoothly execute the merger and realize promised cost savings, then that may have a negative impact on the stock. Besides, the company, like all E&Ps, is also facing the risk of an unexpected decline in oil prices which will dim its future earnings and free cash flow prospects and push the shares lower.