The past couple of years have been a period of transition for the oil and gas sector. While many E&P (exploration and production) firms have managed to survive the ups and downs of the market, many others have failed to do so and have been forced into restructuring. Not always, but often, these firms exit bankruptcy as publicly-traded firms once again. When they do, their financial condition is far better than it was previously, giving future prospective shareholders an opportunity to capture strong upside. The latest such firm to emerge from bankruptcy is Denbury Inc. (NYSE:DEN), formerly known as Denbury Resources. Though investors still need to wait for guidance before knowing the exact range of opportunity the business offers moving forward, it does appear to be healthy at the moment. Moving forward, this should help early investors generate nice profits, especially if crude prices rise beyond the $40 range.

Denbury has had a tough road in recent years. Despite surviving a lot of hardship, the company finally was forced into bankruptcy in July 2020. Using an RSA (restructuring support agreement), the firm was able to move quickly through the bankruptcy process. On Sept. 18, the company finally emerged from bankruptcy. Leading into its Chapter 11 filing, management recorded total debt for the firm of $2.49 billion. $2.1 billion of this was wiped out by equitizing its debts (removing its old shareholders and placing its debtholders in charge of the firm). By reducing debt considerably, management said that annual interest expense should be $165 million lower than when the firm entered bankruptcy. This left the business with $257 million in debt, $140 million of which is in the form of a Senior Secured Credit Facility, and the rest, $117 million in all, in the form of pipeline/capital lease debt.

The restructured company is a really interesting prospect for investors conceptually. Its emphasis is on CO2 EOR (Enhanced Oil Recovery). The process by which this occurs can be seen in the image below, but the short version is that management injects CO2 into the ground and uses that to bring tertiary oil to the surface. This is the most difficult economically-viable crude available to E&P firms. The company’s assets consist of some pipelines, but it also owns significant production potential in parts of the US. In the Gulf Coast, it has an estimated 416 million boe (barrels of oil equivalent) worth of proved and potential reserves. In the Rocky Mountain region, this figure is 630 million boe. 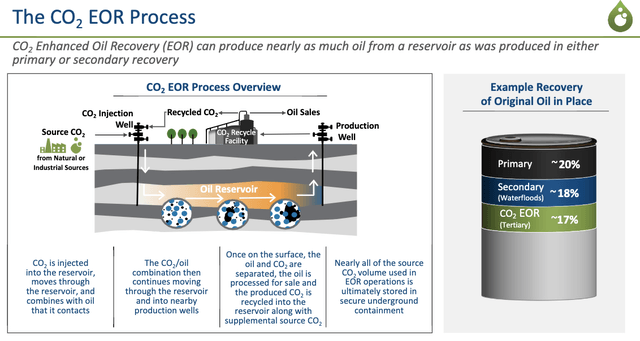 With 97% of its production coming from crude, Denbury is about as close to a pure play on crude as you can get. The firm also believes that it now has what it takes to operate even in a tough energy environment. Specifics have not been provided as of this writing and it’s unlikely they will be until the business reports its next quarter’s earnings (at the earliest). However, management did say that they believe that with oil in the low $40-per-barrel range, Denbury will be capable of generating “significant” free cash flow.

Exiting bankruptcy, the capital structure of Denbury warrants some consideration. Let’s begin with who owns the lion’s share of the business: The original holders of the second lien debt. They have been granted 95% of the 50 million common shares (currently valuing Denbury at $992.5 million with units at the $19.85 they are trading for today). The other 5% of shares will go to the holders of the company’s convertible notes. Those same holders also ended up with 100% of the company’s Series A Warrants. These warrants can be exchanged for 2.6 million common shares of the business, subject to an exercise price of $32.89 per common share. There’s also the Series B Warrants, which are worth 2.9 million common shares subject to a price of $35.41 per common unit. 55% of these warrants are going to the firm’s Senior Subordinated Notes, while the remaining 45% (worth 2.35% of Denbury’s common stock if all warrants are exercised) will have gone to the firm’s existing common shareholders (the pre-bankruptcy shareholders). Collectively, for these warrants to all be exercised, and assuming no other shares are issued moving forward, the implied market capitalization of the firm must rise to nearly $1.97 billion. That’s about double its current market cap.

A couple of points regarding the firm’s debt also are worth mentioning. In all, its Senior Secured Credit Facility has capacity of $575 million under it. After factoring in $53 million worth of letters of credit, the firm has $382 million under the facility. That is due to the $140 million already being tapped. This facility is expected to mature in January of 2024, but it’s always possible for management to negotiate longer maturities if the firm is in solid financial standing leading up to that point in time.

One thing that should not be glossed over regarding Denbury are the risks that it bears. Because of its restructuring, debt is not an issue. The company should theoretically be able to withstand a tough energy environment moving forward. Having said that, one big risk to consider is execution risk. Denbury’s bankruptcy was not just an unfortunate accident. Though the downturn in the energy space may have been unforeseeable, management guided the company into its questionable fundamental condition over time. Where once the firm tread, it’s not unthinkable that it might tread again in the future.

From what we can tell about Denbury’s financial condition, it seems pretty clear the company looks stable. It’s certainly better off than it was a few months ago. What the future has in store for the firm is anybody’s guess, but if crude prices can move just a bit higher, the business should be positioned nicely to generate significant free cash flow. We won’t know exactly what this picture will look like until guidance is provided, but even if the firm falls short of expectations its low leverage makes it a fairly low risk play moving forward.

Crude Value Insights offers you an investing service and community focused on oil and natural gas. We focus on cash flow and the companies that generate it, leading to value and growth prospects with real potential.

Subscribers get to use a 50+ stock model account, in-depth cash flow analyses of E&P firms, and live chat discussion of the sector.

Sign up today for your two-week free trial and get a new lease on oil & gas!