In this regular note, we provide a discussion on fundamental dynamics across the industrial metals, with a special focus on copper, zinc, and aluminium, in order to formulate a clear view on the Invesco DB Base Metals Fund (DBB).

By tracking many real-time micro indicators across the base metals space, we help readers to better assess the real-time changes in refined market balances.

DBB has been undermined by a firmer dollar environment since September, as investors have been inclined to unwind some reflation trades like long commodities. 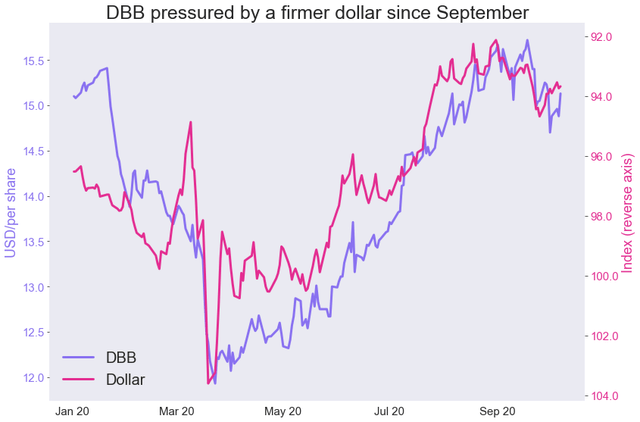 We think that the appreciation in the dollar is a transient phenomenon. We expect US authorities to do whatever it takes to support their economy, while the global economy should continue its recovery, led by China.

Since China consumes roughly half of the global base metal supply, we think that demand has recovered at a fast pace since Q2, as China is the only economy to have experienced a truly V-shaped recovery.

From a seasonal viewpoint, base metals tend to appreciate in the final quarter of the year. In the chart below, we have captured the seasonal component of the average of LME base metals over 2000-2019. While seasonality tends to improve from August, it becomes positive from October.

Against this, we maintain our Q4 bullish target at $18/share. 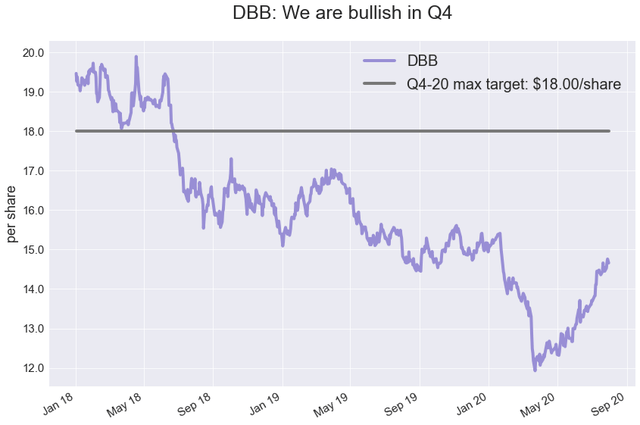 Invesco DB Base Metals Fund allows investors to assert exposure to some of the LME base metals.

The composition of the Fund is as follows: 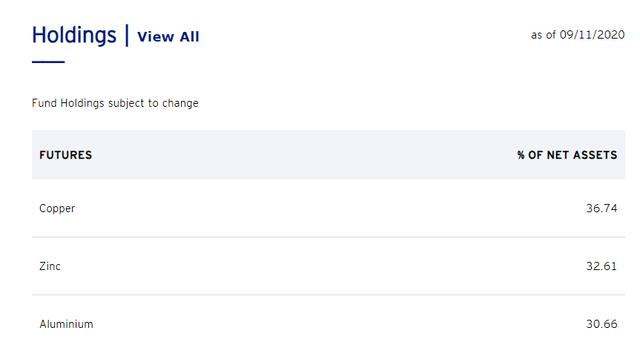 Its expense ratio is 0.80%, which makes it a relatively cheap ETF to get an exposure to the industrial metals complex. 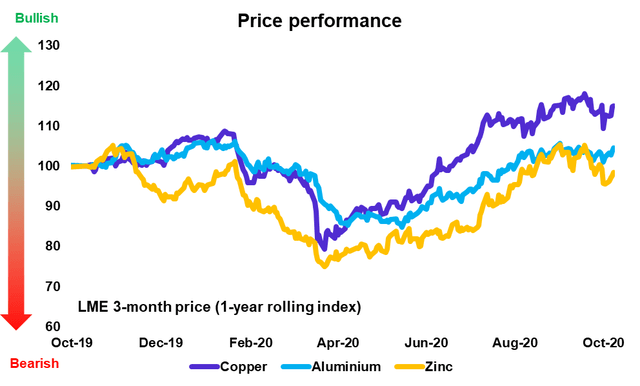 Copper has performed the best over the past year, while aluminium and zinc have lagged behind the red metal.

Although the rebound has lost some steam since October, on the back of a stronger dollar and disinflationary pressure, the base metals complex has rebounded since the start of October.

We think that the rebound from April has more room to run before a major peak is reached.

The market action is bullish for DBB. 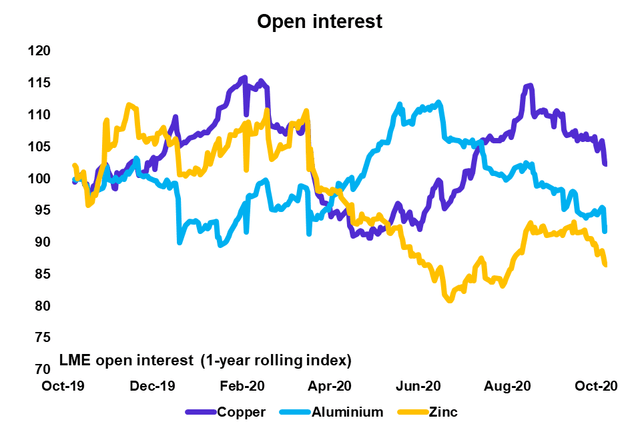 Open interest in LME copper, LME zinc, and LME aluminium declined in September, while LME prices declined over the same period. This means that investors lock in some profits by unwinding their long positions.

This suggests that investor sentiment has not become materially bearish. Otherwise, the fall in prices would have been accompanied by rising interest (more short positions).

We will monitor closely the change in open interest in the coming months. A rebound in open interest in October alongside firmer prices would suggest that investors are confidently bullish, suggesting that the uptrend may prove sustainable into the year-end. 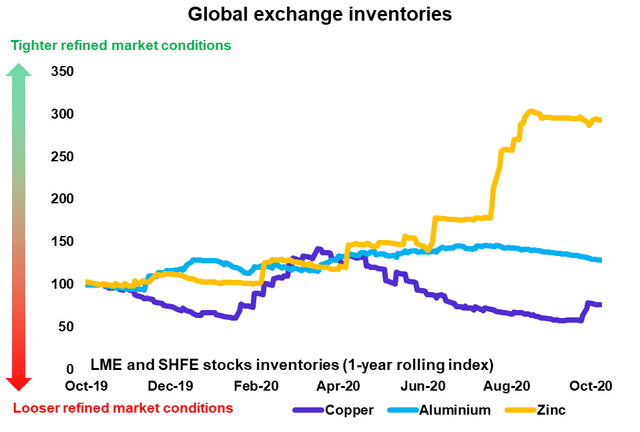 The marked increase in global zinc inventories since June suggests that the refined zinc market has become looser and that a surplus has expanded. This is bearish.

In contrast, global aluminium inventories have continued their steady decline since July, a sign of a lanced market. That said, we contend that some metal is tied in financing deals and therefore, not visible in exchange inventories.

Finally, copper inventories have increased since late September after substantial deliveries into LME warehouses until the end of September. This suggests that the refined market has become slightly looser of late.

On balance, exchange inventory flows are neutral to bearish for DBB.

Investment funds have increased substantially their net long positions since April. Spec positioning in the LME complex is heavily long, and therefore, vulnerable to some unwinding.

Given the strong recovery in the Chinese economy and the metals-intensive stimulus implemented by Chinese authorities, it is not a surprise that investors have become bullish on the base metals.

We expect spec positioning to become longer for longer, which should be supportive of base metals prices in the near term. That said, we need to remain mindful of an eventual negative change in sentiment, resulting in speculative profit-taking and lower prices regardless of fundamental dynamics.

On balance, spec positioning is bullish for DBB. 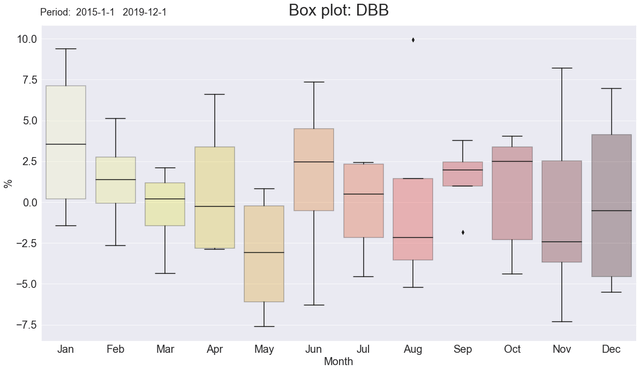 The seasonality of DBB is positive in October, which is due to a traditional pick-up in physical consumption.

The seasonality is bullish for DBB.

Although DBB has come under pressure since September, we attribute its weakness to the renewed strength in the dollar, which we view as a transient phenomenon.

As China has unleashed a metals-intensive stimulus to fight the COVID-19, we expect Chinese base metal demand to continue to grow at a firm pace. Since China consumes around half of the base metal refined supply, refined market balances are likely to become tighter over the next 6 to 12 months.

With the seasonality playing in favor of base metals in the final quarter of the year, we think that the weakness in DBB is already over, expect DBB to push higher into the year-end.