Formed in 2007, CrossFirst Bankshares, Inc. (CFB) is a $5.5 billion asset bank holding company based in Kansas City with seven full service offices in Kansas City, Wichita, Tulsa, Oklahoma City and Dallas. The company holds the number eight deposit market share position in Kansas City, which is actually pretty remarkable given how relatively young the bank is compared to national peers. The bank’s lending profile is much more commercially focused as about 34% of loans are C&I credits and 40% are commercial real estate loans. The vast majority of CFB’s growth has been organic, but that could change if management is serious about making a splash in Texas.

In May of 2020, CFB announced that then-President and CEO George Jones would be transitioning his role to Mike Maddox in June. Jones will continue to be on the Board of Directors until 2021 as Vice Chairman and also continue his focus on expansion into the Dallas market.

If you follow banking and know the players, CFB seems to be well-positioned to capitalize on any open windows of opportunities from the ever-plagued Texas Capital Bancshares (TCBI). Remember, former CEO and now Vice Chairman, George Jones, was the former CEO and one of the founders of TCBI.

When thinking about CFB today, I am pretty neutral. I think the bank has a great future, but asset quality trends will be critical over the near term as CFB’s economically sensitive loan exposure is higher than peers. However, when thinking over the longer term, CFB is a likely beneficiary of potential disruption opportunities in the Texas market. In my mind, the recent CEO transition was smooth, and I am confident that management will continue to focus on market share gain and efficiency efforts.

It’s hard to get a sense of how credit will react since the company is so young. I am not willing to take too much risk on such a small company; however, if shares were to drip down to ~$7 like they did in April, I would consider that a screaming buy. Longer term, I think the game plan looks exciting, but today the credit profile leaves me a little squeamish.

The company reported back-to-back quarterly losses in the first half of the year. It also has about 23% of loans in higher risk sectors, which in and of itself should limit investor excitement. A $21 million loan loss reserve build drove the quarterly loss as there was a sizable amount of credit migration, mostly in energy loans.

It also has 9% of loans in leveraged credits, which might sound concerning but is actually pretty standard for smaller banks that are looking to grow quickly. Capital levels are strong and management is very focused on improving efficiency over the next several quarters. Management noted there will be a particular focus on efficiency improvement and capital optimization over the next several quarters, which to me sounds likes a merger is being arranged.

Fee income jumped 26% from the first quarter, largely driven by transaction fees and interchange revenue. Card fees were elevated by a single customer with a unique situation; however, I am modeling that category to normalize in the third quarter. There were some unique securities gains in the second quarter too, but that should also normalize going forward. 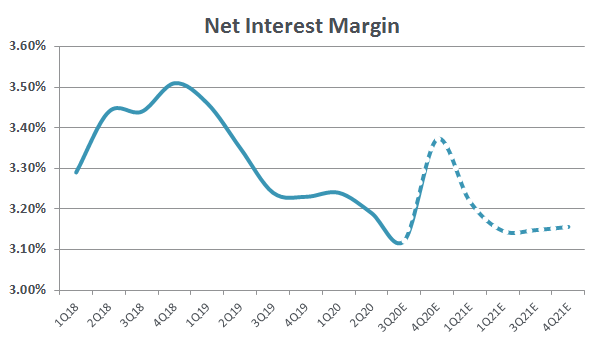 In my mind, loan growth should be very moderate in the second half of the year as demand is soft and the company is highly selective. Also according to management, the company will not extend the duration of the securities portfolio in a meaningful way. The NIM should be in the 3.10%-3.15% range once we get beyond the PPP loan forgiveness and assets reprice down a little more.

As previously mentioned, there was a $21 million loan loss provision expense in the quarter. The loan loss reserve is now 1.76% (excluding PPP loans) and 4.50% of energy loans following the reserve build in the second quarter. Net charge-offs (NCOs) were $1.3 million, or just 0.12% of average loans, down from highly elevated levels in the first quarter.

The company had a $1 million energy loan loss in the second quarter, which is very frustrating to see so early in the recession. However, management sees the most at risk segments in energy (6% of the loan portfolio), restaurants (2%), hotels (4%), entertainment (3%), healthcare C&I (3%) and retail commercial real estate (5%). 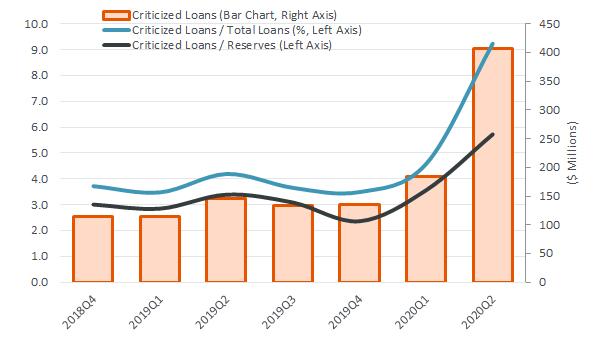 Classified loans as a percent of the loan loss reserve and capital are now 35% versus 16% at the end of the first quarter. Nonperforming assets increased 33% mainly from energy and C&I loans. Modified loans were just over $700 million at the end of the second quarter, mostly in hospitality, rental real estate and healthcare. Most of the risk migrated modified loans were in hotels and retail CRE. As one can see from the chart above, criticized loans are also increasing rather quickly and could limit profitability (as more provisioning is needed).

At this point, I doubt management has a plan to implement CECL this year or next, which is good. If CECL were implemented, the bank would have massive reserve-building requirements. According to the second quarter press release, management expects most of its loan loss reserve build is in the rear-view mirror, but economic visibility is still low.

Wrapping this all up is rather difficult. On one hand, I do think that CFB is set up well for the future. I think the current management team is going to execute a plan to take a sizable amount of market share from the smaller Texas banks.

However, on the other hand, CFB has pressed the gas a little too hard in terms of growth. Smaller banks have a tendency to try and just outgrow their problem loans. One bad loan of $1 million is much less meaningful if the bank can kick the can down the road and just get bigger before the loan goes belly up.

Credit is clearly a concern that needs to be addressed. Personally, I believe CFB will have some material credit pain in the near future, which is the main reason why I would suggest potential investors stay on the sidelines. However, once that passes, this bank has a solid game plan and all the right bankers in its setup for the next decade.