Cal-Maine: It Is Never Wise To Put All Your Eggs In One Basket (NASDAQ:CALM)

A couple of days ago, I wrote an article on Vital Farms, and while writing it, I noticed that Cal-Maine Foods’ (CALM) net sales had been steadily declining over the past five years. I know that CALM sells cage-free eggs like Vital Farms (NASDAQ:VITL), so I needed to understand why their revenue decreased.

Cal-Maine Foods is a soft commodities company, and its results depend on highly volatile commodities prices. Its sales depend on shell egg prices, and its variable COGS are correlated with grain prices, specifically corn and soybean. An investor should understand these risks before investing.

The Future Of The Shell Egg Industry

Using information from the United Egg Producers facts & stats website and the U.S. Census Bureau, I forecasted what the Shell Egg industry should look like in 2026. I encourage you to read my article on Vital Foods to better understand how I forecasted the shell egg industry’s future growth.

According to my calculations, I believe the laying hen population should grow at a CAGR of 1.9% during the period. While I was reading Cal-Maine’s 2020 annual report, the company believes that the general demand for eggs will increase on average by 2% a year. In my opinion, their comment makes me more confident in my forecast.

According to my estimates, I believe cage-free eggs will grow at a CAGR of 17.5% from 2019 to 2026. Also, conventional egg production should decrease at a CAGR of 8.5% during the same period.

While reading the company’s 2020 annual report, I learned that specialty egg sales are adversely affected by the decrease in conventional egg prices. It makes sense that at some point, a consumer will pick a conventional egg over a cage-free egg if the price is different enough. I see this as a risk to my forecast and to the USDA’s forecast that 64% of the hen population will be cage-free in 2026.

What Is Occurring At Cal-Maine

Consumers are changing the face of the shell egg industry by requiring companies to treat the animals that are feeding us in a more humane way. I do not think this change is bad because I prefer the taste of cage-free eggs over conventional eggs. But for Cal-Maine, it is not the best news they have heard.

According to the company, specialty eggs are an essential part of their growth strategy. What I believe they should have said was that if they do not focus on providing a product mix that the consumer wants, they will go out of business. In the fiscal years of 2019 and 2020, the company’s net sales of cage-free, organic, and nutritionally enhanced eggs were $504.2 million and $485.5 million, respectively.

From 2013 to 2020 (fiscal years), the company’s FAT ratio has continuously been declining, as seen in Figure 2. During the same period, the company’s sales only increased at a CAGR of 0.7%, while its average PP&E (net of depreciation) has grown at a CAGR of 11%. Over the next ten years, I believe the general trend of the FAT ratio will continue because the company will need to make capital expenditures to meet cage-free demand.

Nearly 90% of the company’s volume sold comes from its facilities, and the rest they purchase from outside producers. Let’s imagine for a moment that the company produces all of the company’s specialty eggs. In the fiscal year 2020, 24% of the total volume sold was specialty eggs. So the company will need to convert its current operations enough to produce at least 40% more specialty eggs. This doesn’t take into account that they will have to have more space because cage-free hens have a larger minimum spacing requirement than the current wingspan requirement (a conventional hen must have enough space to flap its wings without hitting anything). 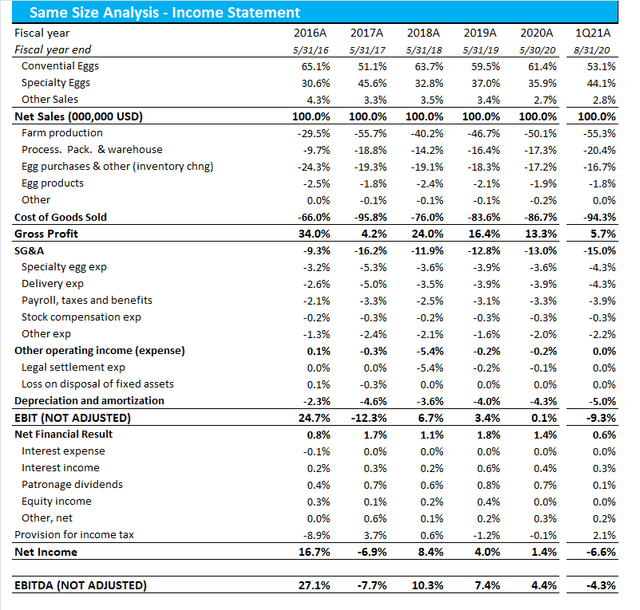 The company’s gross margin has been dropping rapidly, mainly due to high fixed costs to produce eggs (located in COGS) and decreased egg prices which reduced revenue. The company’s financial income has been able to add about two percentage points to its net income every year, but that didn’t help enough for the company to distribute dividends in FY 2020. Not including what occurred in 2017, the company’s profit margin is clearly declining.

I am bearish on Cal-Maine because I only see three possible scenarios for Cal-Maine, and none of them will provide investors with a good return on investment over the next five to ten years.

I feel that the company did not take the cage-free movement seriously when it occurred, and now it is struggling to make up for the lost time. I am studying to see if CALM would be a good short candidate, but for now, I know I would not own the stock.

If you like what you read, please “Follow” me via Seeking Alpha. I typically only cover the Brazilian markets, the Robotics Industry, and the Food Industry.