BUI: Sheltered From The Storm (NYSE:BUI)

In a year with the fastest correction (and rebound) on record, it isn’t a surprise that many investments are treading water or negative for the year. Even the utility sector has taken quite a hit, showing a loss YTD of 8.11% based off of the Utility Select Sector SPDR (XLU). That being said, there is one stand out fund; BlackRock Utility, Infrastructure & Power Opportunity Trust (BUI). This fund is showing slightly positive returns YTD. In a typical year, slight positive wouldn’t be anything to write home about. However, for the reasons stated above, it is rare that a utility fund is above water for the year.

The fund’s investment objective is to “provide total return through a combination of current income, current gains and long-term capital appreciation.” They have quite a lengthy description of their investment policy to achieve this; the crux of this is “investing primarily in equity securities issued by companies that are engaged in the utilities, infrastructure and power opportunities business segments.”

Besides investing in utilities, infrastructure and energy (and every subsector you can think of under these umbrellas) – the fund also utilizes an option writing strategy. They write single stock options against their underlying holdings, similar to most of BlackRock’s other sector-specific funds. Currently, the fund reported having being overwritten 33.56% of its portfolio.

The fund operates with $382.6 million in assets. This isn’t extremely large, but not necessarily too small for retail investors either. They charge a management fee of 1%, and the total expense ratio comes to a reasonable 1.12%. The fund also isn’t constrained to investing in the U.S. alone, having exposure to all over the world. 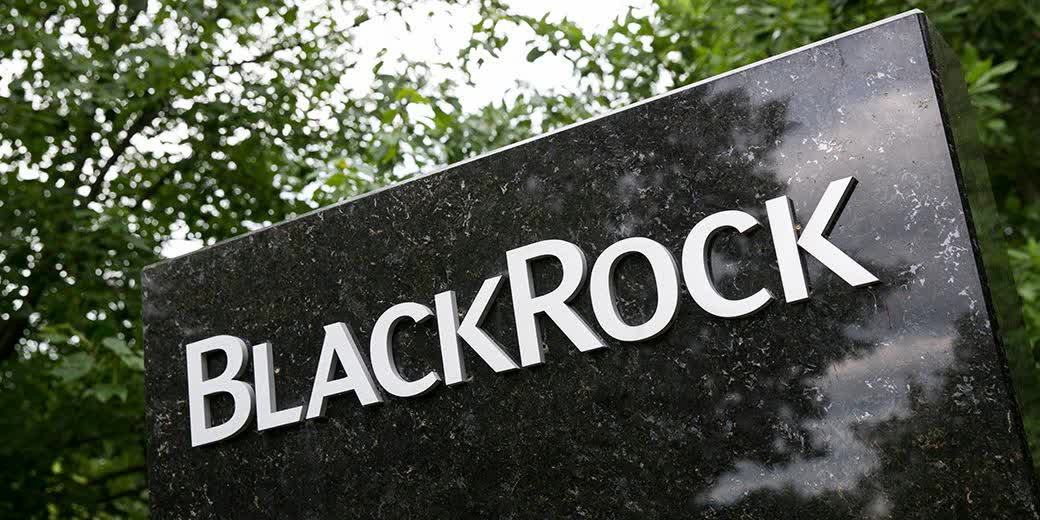 Performance – Out On Top

This can even be compared to some of the other stalwart funds that are vastly more popular than BUI. Long-term winners Cohen & Steers Infrastructure Fund (UTF) and Reaves Utility Income Fund (UTG). 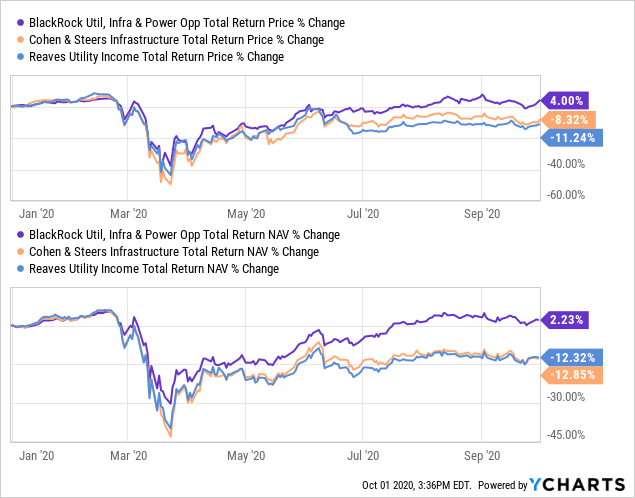 Now, investors familiar with these funds will realize that the leverage the other funds utilize does play a role. BUI relies on option writing as their approach, rather than leverage. To measure the exact impact that March’s decline played a role, we will take a look at the fund’s NAV performance between February 19th, 2020, to March 23rd, 2020. 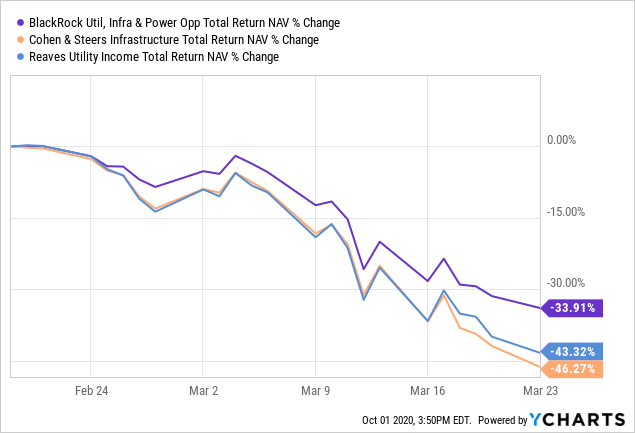 As we can see, the performance was quite apparent as we started to head down sharply. That isn’t to say that UTF and UTG aren’t great funds, they absolutely are. It is just that investors wanting to avoid leverage can potentially look at BUI as a place to still get utility exposure with less volatility.

For a decrease in potential volatility, we have historically seen lagging long-term historical returns. That is exactly as we should suspect by lowering risk. 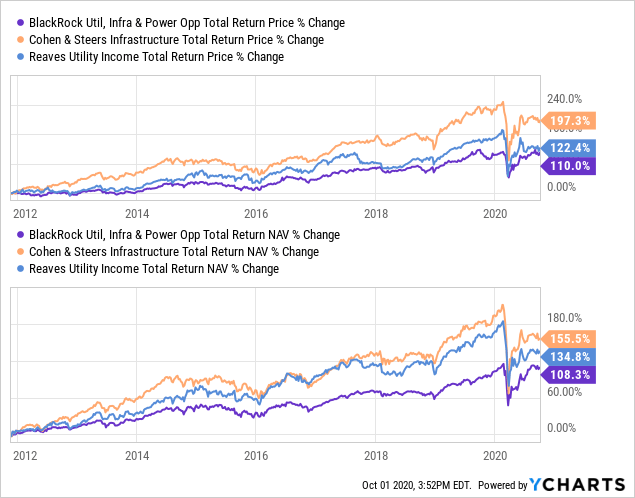 That being said, the fund also trades at a slight premium currently of 2.11%. This isn’t outlandishly high, but it isn’t necessarily a screaming deal either. The last 1-year average was 1.95%. Though the fund isn’t a stranger to premium levels as last year, for whatever reason, the fund hit 15%+ premium pricing. 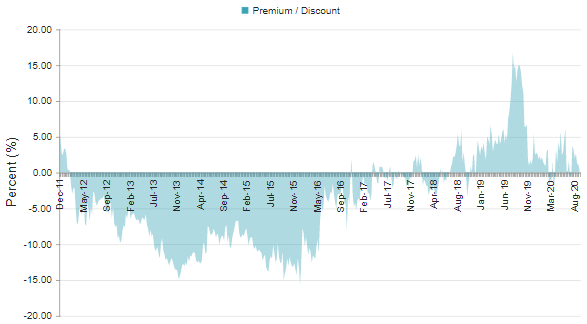 BUI is one of those funds that has never had to cut its distribution. That being said, the fund launched in 2011 – so we only have one true market collapse under their belt. Although Q4 2018 saw a correction, it wasn’t based on actual economic data but that the Fed was too aggressive with raising rates. So, that leaves us with 2020’s recession, which is impacting the economy. Considering the performance we explored above too, I’d say they passed with flying colors.

I don’t necessarily see a reason for them to cut their distribution either for current conditions. The fund is paying out a $0.121 monthly dividend, this works out to a 6.67% yield. On a NAV basis, this works out to 6.81%. Of course, this isn’t a mind-blowing yield that gets people excited. Which, is interesting due to the fund being able to trade at premium levels anyway. Generally, we see only some of the highest yielding funds priced at premiums.

The distribution did go from a quarterly payment schedule to a monthly one in 2014. This is oftentimes done as a way to narrow the discount on funds that do pay quarterly. However, at that time, the funds discount didn’t dissipate. In fact, from what we can see above, it expanded in 2015.

As an almost all equity fund, we see a significant portion of their distribution covered via capital gains. This isn’t out of the ordinary though. As of their last report ending June, 30th, 2020, the fund’s net investment income coverage came to around 28.2%. 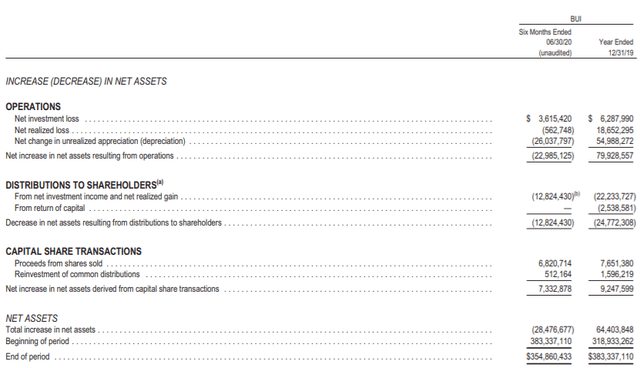 Another positive is that due to the fund’s premium pricing, it has been able to raise a considerable amount by their at-the-market offering and DRIP. That also helps pad appreciation on the fund. At the end of that reporting period, the fund was also sitting at almost $75.7 million in unrealized appreciation as well.

Some investors may be concerned with BUI’s ROC. However, this hasn’t been destructive for the last couple of years due to NAV growing. This ROC is from their underlying positions and options strategy.

Holdings – Narrow Focus, That Has Been Working

One area of BUI that is interesting, is that they hold 51 positions. UTG also runs a rather tight portfolio that is concentrated. This is as opposed to a fund like UTF, that holds several hundreds of positions. This does mean that a single position can play a greater role in the fund’s outcome – whether positive or negative. In this case, I would venture to say that the positive return in a negative year for the sector bodes well for management’s capabilities. To reiterate, the other funds do use leverage, where that is absent for BUI – that has played a role in this year’s performance.

Equally as interesting, the fund also has a global tilt to its portfolio. In fact, it is quite a large tilt with 53.71% represented by U.S. positions, giving us the remaining portion being rather large. This other exposure comes primarily from Europe, though China does appear as well. 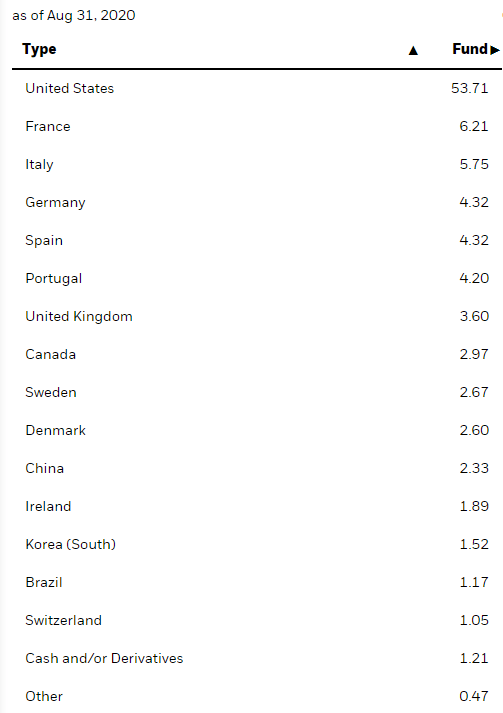 This is interesting for the fact that generally, investments outside of the U.S. have been rather lackluster. It seems they were able to maneuver their fund around these lagging positions on this metric as well.

The largest sector allocation is to the typically defensive utility sector, capital goods also make up its second-largest exposure. Then, energy comes in at its third-largest sector holdings. This lower exposure to energy at 9.34%, hasn’t been detrimental as the fund has still been able to put up good performance numbers.

This now takes us to a look at the fund’s top 10 positions. Sitting in the first spot is one company that everyone has sure to have heard by now; NextEra Energy Inc (NEE). As the world’s largest renewable energy company, they have gained tremendous popularity in the investing community. Additionally, this has helped push the company’s stock price and returns to extraordinary heights for the year. For BUI, this comes to a 9.23% weighting as well. Though this likely climbed from the beginning of the year based on NEE’s performance anyway.

On a YTD basis, NEE is up with a total return of 18.61%. Taking a look at the company’s long-term total return performance though, and it is clear to see just how far this company has come. The company has been able to grow rapidly enough to keep its forward P/E at 30.38. Which is high for a utility company. When putting it in the context of the underlying price movement though, seems to still be reasonable. 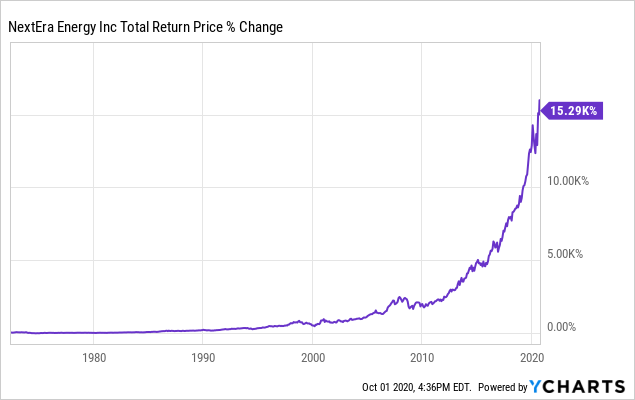 That being said, they are apparently on the hunt for an acquisition. They had approached Duke Energy (DUK). DUK rejected this, but the rumor was that NEE would attempt a hostile takeover. Now, the CEO of NEE came out to quash that notion.

After NEE, we have some interesting non-U.S. companies that are probably not as well known. There is Enel SPA (OTCPK:ENLAY), Iberdrola SA (OTCPK:IBDRY), EDP Renovaveis SA (OTCPK:EDRVF) and RWE AG (OTCPK:RWEOY). These are all traded OTC, which makes them a perfect candidate for an investment manager to use their knowledge and experience to invest in this area of the market. It isn’t that these aren’t well-known companies where they operate, but that OTC often requires less stringent reporting and lower volume. 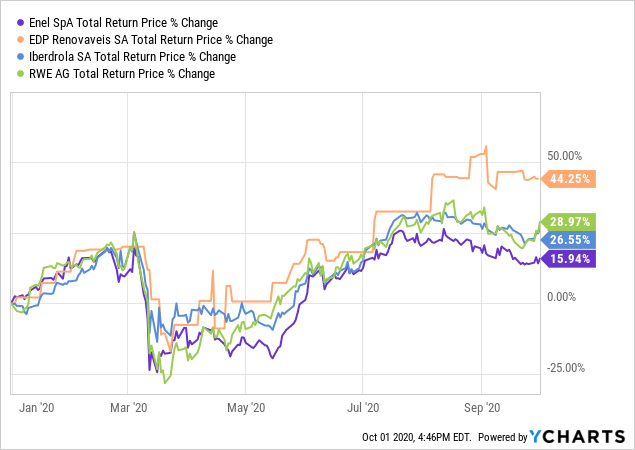 That being said, these increased “risks” have worked out extraordinary well for BUI this year. And ultimately, this is where we can really start to see just why BUI is positive for the year – while other peer funds are down.

EDRVF being up over 44% YTD is quite impressive. They are a renewable energy company that is headquartered in Madrid. Essentially, Spain’s NEE. However, the volume is incredibly low – investing in this even for retail investors would be rather risky with their average volume of 4,779 shares trading a day.

BUI has put up some great historical performance, even as its portfolio tilts towards global positions. The portfolio remains rather concentrated towards the top. This is especially compounded by the fund holding a relatively small 51 positions. That means each position the management team is betting on, is having a larger impact on the overall return and performance of the fund. Historically, this has worked out for BUI. This year it was even more apparent of the strength in management. However, this can also create greater volatility potentially. In the market crash in March, it was apparent that even considering that risk, the fund was still better off than utilizing leverage in its portfolio.

That lack of leverage did keep BUI showing lagging performance over the longer-term though. The fund also pays one of the lower yields in its peer group. Surprisingly, this hasn’t led to deep discounts being available. The opposite appears to have happened over the last several years, with the fund trading at premium levels.

Overall, BUI is a solid fund in the utility/infrastructure space. So far, BlackRock’s management team has been able to put up some attractive returns. I continue to be impressed with this fund, but I do wish the discount would widen a bit before jumping in too aggressively. The widest discount for BUI recently came on March 18th, it came to a 21.86% discount. So, while rare, the fund can be bought at extreme discounts. That being said, March’s discount levels are extremely rare. BUI is ideal for an investor that wants unleveraged utility/infrastructure exposure.

At the CEF/ETF Income Laboratory, we manage ~8%-yielding closed-end fund (CEF) and exchange-traded fund (ETF) portfolios to make income investing easy for you. Check out what our members have to say about our service.

To see all that our exclusive membership has to offer, sign up for a free trial by clicking on the button below!

Disclosure: I am/we are long BUI, UTF, UTG, NEE. I wrote this article myself, and it expresses my own opinions. I am not receiving compensation for it (other than from Seeking Alpha). I have no business relationship with any company whose stock is mentioned in this article.

Editor’s Note: This article discusses one or more securities that do not trade on a major U.S. exchange. Please be aware of the risks associated with these stocks.