The worldwide collapse of automotive production in the second quarter, a consequence of the global pandemic, has further wounded an already-hobbled Nissan.

Key to Nissan’s recovery is a return to profitability, which likely hinges on success in its most important and profitable market, the U.S. Sales in the U.S. reached a peak of about 1.6 million in 2017, falling to 1.2 million for the fiscal year ended on March 31.

In May, Nissan posted a $6.2 billion loss and announced a program to cut global vehicle-making capacity. The automaker has been operating manufacturing capacity to produce about seven million light vehicles, though it barely can sell five million.

CEO Makoto Uchida said he hoped Nissan would be generating positive cash flow by the end of 2021. Nissan also said it would be cooperating more closely with Renault, which owns 40% of its shares. The cooperation entrails Nissan’s focusing efforts on Japan, China and the U.S. – while letting Renault SA concentrate on Europe and Latin America. (A third alliance partner, Mitsubishi Motors (OTCPK:MMTOF), will put its efforts toward the southeast Asian market). Under the restructuring, Nissan is cutting global capacity to 5.4 million vehicles.

Among the Nissan plants to survive the cut is its massive complex in Smyrna, Tennessee, where the new third-generation Rogue is being built. To maximize capacity for Rogue, Nissan is moving production of the Altima sedan to its plant in Canton, Mississippi, which until now had been devoted mostly to trucks and vans.

In a recent presentation to journalists, Nissan said Rogue is one of 10 new vehicles to be introduced over the next 20 months and the first of six new or redesigned vehicles by the end of 2021. 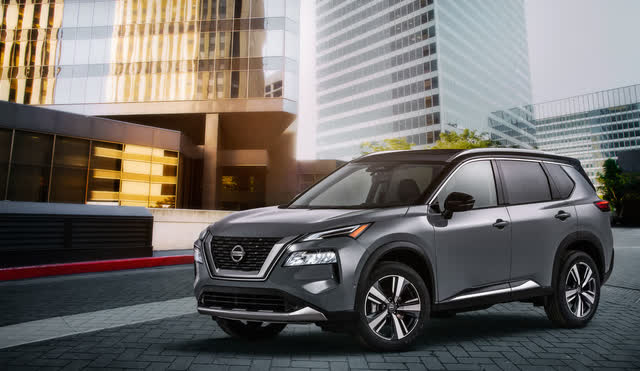 The compact SUV segment in which Rogue competes is one of the fastest growing and most competitive in the U.S. light-vehicle market, which is led by Toyota Motor Corp.’s (NYSE:TM) RAV-4 with Honda Motor Co.’s (NYSE:HMC) CR-V a distant second. At the moment, the second-generation Rogue is in fourth place, behind General Motors Co.’s (NYSE:GM) Chevrolet Equinox, according to Kelley Blue Book. Rogue’s unit sales year to date are 38% below the same period a year ago, its market share of the segment having slipped to 9.2% from 9.6% a year ago.

The new Rogue offers a raft of standard and optional convenience and safety features that will make it more competitive against rival models and could strengthen its pricing. The most notable mechanical enhancements include a new rear suspension and electronic steering system that improve the vehicle’s stability and handling.

Rogue, Nissan’s top-selling model, is a particularly strong nameplate across the industry, competing among the top 10 vehicle nameplates over the past decade. It finished within spitting distance of Toyota RAV4 in 2017.

“The 2021 Nissan Rogue is finally a competitive entry in this bustling crossover segment. While the last one sold well and made a good first impression, the more you drove it, the more disappointing it became. That’s no longer the case for 2021, as the Rogue gains a much improved chassis, a touch more power and extra refinement that amount to a crossover that’s considerably better to drive.”

Other reviews echo Autoblog’s positive sentiment. Nissan will have to fight its way back to the hearts of not only U.S. vehicle buyers, but also to its retail dealers, who are exasperated at the automaker’s management turmoil, as well as unpopular incentive plans aimed at increasing market share.

The shares, which trade as an ADR (American Depositary Receipt) in the U.S., haven’t paid a dividend since 2014. They traded in a fairly narrow band between $17 and $22 until early 2018 when the strains between Nissan and Renault began to intensify. Since then, they lost about two-thirds of their value, now trading at about $7 and change.

An investor would need a stout heart and a lot of daring to risk capital on Nissan at this stage. Yet the automaker does have a considerable engineering heritage, the presumed backing of the Japanese government, an early pioneering position in battery-powered propulsion with its Nissan Leaf EV (now in its second generation) and a brand that, despite all, has loyal adherents.

New EV on the Horizon

Next year Nissan will begin selling its all-new battery-powered Ariya SUV, which claims a range of up to 300 miles, and will compete with a spate of new electrics like the ID4 from Volkswagen AG (OTCPK:VWAGY) and others. So far, consumers have been cool towards EVs other than luxury models such as Tesla (NASDAQ:TSLA). Governments are ratcheting up incentives and pressures for more EV, so automakers are developing new offerings. Ariya will be sold in limited numbers at first, though its arrival could foreshadow a bigger commitment from Nissan. 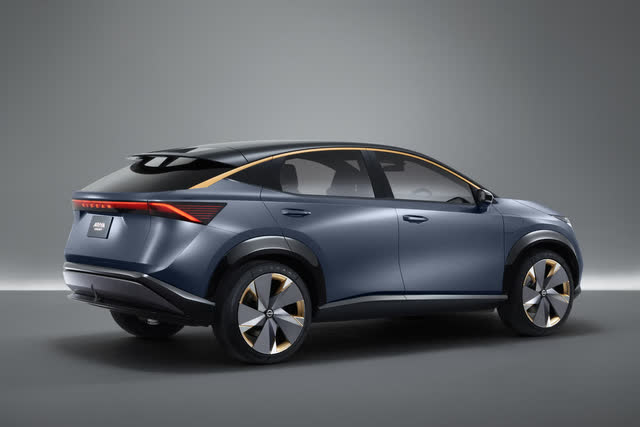 Few natural phenomenon are stronger than a reversion to the mean. Nissan is barely scraping along these days. If it figures out a way to become a force again in automaking, its stock price will give Nissan believers much to celebrate.

Auto/Mobility Investors brings you the latest in tech advances and investment ideas from global mobility enterprises.