Headquartered in Green Bay, Wisconsin, Associated Banc-Corp (ASB) is the $36 billion asset holding company for Associated Bank, a Midwest commercial and retail bank. Associated offers a broad array of banking and capital market products and services to retail and commercial customers throughout Wisconsin, Illinois, and Minnesota, as well as a few other nearby states.

With the excess equity from the insurance sale, future capital deployment opportunities could represent upside over time. However, ASB has historically had lower than average profitability levels and a higher expense base, which kept a lid on valuation relative to peer banks.

However, I have become more positive on the shares following ASB’s announcement of additional cost rationalization efforts, branch sales, and early redemption of higher cost borrowings.

My bullish stance is driven by management’s increased focus on enhancing profitability through expense control. I expect to see an improvement in operating leverage and the efficiency ratio, albeit at a slow rate, but any sustainable improvement is often rewarded by shareholders through the form of valuation relative to peers, even if the move up is to simply be “average” (like in ASB’s case). While the current branch count is a little too high, in my view, I believe the recent actions to not only stem expense growth, but cutting costs should lead to share price outperformance.

While I don’t believe ASB is going to start to trade at a premium to Midwest banks, most peers are near 1.1x Price to Tangible Book Value per share. In the next few weeks, I believe bank’s third quarter earnings are likely to shed some light on the overall credit picture.

In my mind, if things look worse from a credit perspective, ASB should be fairly insulated given its extremely low share price valuation. If things look better, I would expect ASB to outperform peers over a moderate time-frame; simply getting back to peer like levels in terms of valuation.

In the second quarter, the net interest income was $190 million, which actually marked a $13 million decrease from the first quarter. This decrease was more so driven by net interest margin (NIM) compression rather than sluggish loan growth. In the second quarter, loans grew more than $1.9 billion, largely due to PPP related loans (as seen in the $1.7 billion increase in commercial loans).

The NIM fell 35 basis points to 2.49% in the second quarter. This fairly precipitous fall was caused by the yield on average earning assets compressing 73 basis points from first quarter levels along with excess liquidity on the balance sheet from PPP related deposits not being put to work. The NIM compression was only partially mitigated by the average funding costs calling 46 basis points.

From a fee income perspective, overall noninterest income increased $156 million (from first quarter levels) to report an astounding $254 million. ASB, like many other retail oriented regional banks, had very strong mortgage operations. However, I would be remiss not to point to and back out the $157 million in asset gains which was driven from the insurance company (Associated Benefits and Risk Consulting) divestiture. 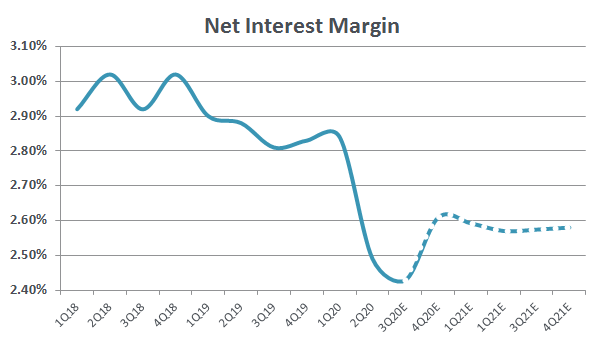 Going forward, while I do expect overall loans to grow slightly, I am expecting the margin to bounce from current levels too and then retain most of those gains. While most banks I have written about should see a quick one-time NIM pop, driven by PPP related loans being forgiven, I think ASB is likely to have a slightly different outcome (much more positive in fact).

In my mind, ASB has too much liquidity on its balance sheet and will likely deploy some into more productive uses. While the NIM is not likely to rebound to levels seen last year, I am expecting the second quarter margin to not only be the recession low, but for the NIM to also increase 15+ basis points in the third quarter. The improvement in overall net interest income should support a positive total revenue growth outlook and an improvement in profitability. Finally, the recent Federal Home Loan Bank paydown should show some material upside (more details below) on the NIM from here on out.

While most of the banking industry is likely to see relatively flat expense growth next year, I believe ASB is going to see a very healthy decrease. From its most recent presentation, ASB recently announced a $60 million cost cutting effort, which will be derived from multiple areas of the bank. 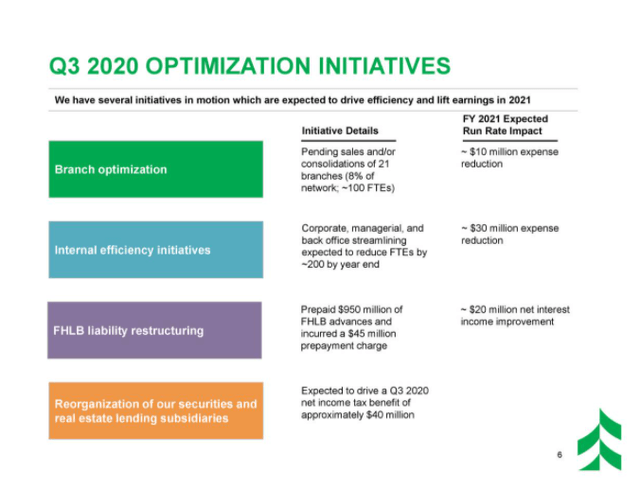 When breaking it down, $10 million will come from closing (or selling) 21 branches. Also, a $30 million improvement will come from the general streamlining of the back office and corporate overhead from early retirements to become a smaller (but more profitable) organization after selling Associated Benefits and Risk Consulting.

The third one is a little tricky, ASB recently prepaid $950 million in Federal Home Loan Bank advances. While this action does have a $45 million one-time pre-payment charge, ASB just reorganized its two remaining subsidiaries (post-insurance sale) and unlocked a $40 million restructuring benefit.

While the third quarter will have that ~$5 million difference in outflow (i.e. higher expenses; $45 vs. $40 million), the interest income revenue will see $20 million less in interest expense – which should drive a good portion of the sustainable NIM improvement. 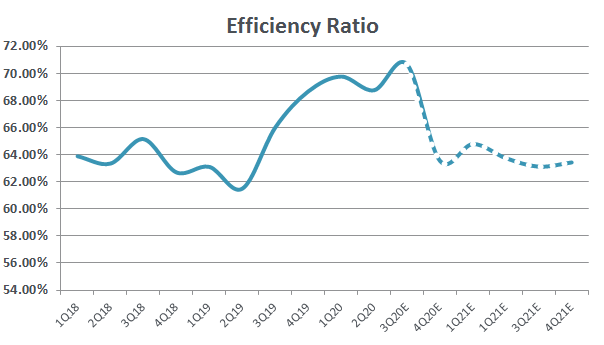 As one can see from the graph above, the efficiency ratio has steadily worked its way higher (recall: Efficiency Ratio = Expenses / Revenue) over the past couple of quarters.

When modeling in the recent cost cutting efforts and slimming down the bank’s overall operational footprint, I am modeling total expenses coming down while total revenue increases. The combination of these two actions should drive profitability improvement and solid earnings growth in the coming quarters.

I think the market missed how material the most recent update from ASB management is when adding it all together. Historically, ASB has had a fairly bloated expense base driven by its multiple non-core banking operations. After announcing the sale of its insurance business, I started to get a little more excited about the bank. When management recently announced the cost cutting efforts, I would have expected the share to begin to re-rate higher.

The overall credit profile looks pretty good and I think the worst of the reserve building (via increased provision expense) is behind us. From now until the end of the year, there is likely to be some sizable “restructuring” charges which can mess with the reported profitability quite a bit for any given quarter. However, as we start 2021, I think the bank is set up quite well to start the new year on a lower cost base and a stronger profitability outlook.