While most stocks underwent a correction in September, beaten-down coal companies were among the few that actually saw strong performance. The coal ETF (KOL) rose about 5% with names such as Arch Resources (ARCH) rising a staggering 33%.

Interestingly, Alliance Resource Partners (ARLP) has been left out of the rally. The company produces both thermal and metallurgical coal. The stock is trading at nearly its lowest price ever despite recently seeing an uptick in sales and prices. The company is no doubt in a difficult position after seeing sales decline over 50% Y/Y last quarter.

That said, the company had a positive demand outlook for Q3, and recent events in the coal market indicate that demand is indeed rising. Natural gas prices are higher which should boost competitive demand. China recently looked to increase coal imports due to a shortage, which was made worse by a mine collapse and corruption probe. If this continues to cause coal prices to rise internationally, ARLP’s export business should see greater profitability and demand.

A Closer Look at ARLP’s Valuation

ARLP has declined about 15% on generally positive news this month. Of course, with the equity market as a whole seeing higher volatility this month many investors may be selling ARLP in order to shore up liquidity. Though the company historically pays an extremely strong dividend that would equate to a yield of 50%, it is currently suspended as the company uses cash flow to reduce debt and increase working capital. This factor may also be contributing to selling pressure.

Regardless, ARLP is extremely cheap at its current price. The company is trading below its early 2016 valuation level from which its share price rose 130%. See below:

The company did see a significant decline in sales last quarter which caused its income to fall substantially. That said, it was still able to generate positive operating and free cash flow as it has been able to do nearly every quarter in history:

The company’s revenue has declined in recent years as it has made a few of its less-profitable mines non-operational. That said, it is still a cash-generating machine with high operational efficiency.

Alliance is also quite solvent. The company has $760M in financial debt and $383M in TTM operating cash flow with that figure usually being closer to $500M. This is a very reasonable debt level with a financial debt-to-CFO of about 2X. The company did suspend its dividend and is using the savings to pay down its debt revolver which should also improve its access to liquidity. Based on its recent transcript, it appears the dividend will remain suspended until stability returns to the coal market, and its debt is reduced.

While I like dividends, this will make the company much stronger after the crisis is over. To a certain extent, this is no different than having a dividend automatically reinvested in a company since its cash flow is being used to increase equity book value.

Macro View on Coal is Supportive

Coal generally follows natural gas. As natural gas prices rise, coal becomes the more profitable choice for many plants. As you can see below, thermal coal prices have spiked with natural gas leading the way higher: 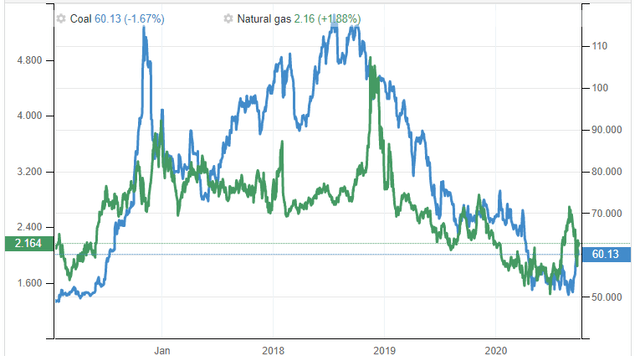 Indeed, there is significant reason to believe natural gas will continue to rise. Natural gas production has plummeted with the natural gas rig count falling to all-time lows. This may create a shortage in 2021 if production remains low and/or this winter is cold.

More importantly, many believe that coal consumption is declining in the U.S. due to the rise of renewables. However, solar and biomass only account for about 3% of U.S. electricity consumption. It is the rise of natural gas which has caused coal companies to fall to their knees. Importantly, COVID has increased talks regarding peak shale production for natural gas. This means future production growth for natural gas may be flat to negative.

Coal is far more abundant than natural gas and can easily make up for declines in NG production. Quite frankly, this may mean coal makes a surprising recovery during the next decade since there are no other abundant energy sources that can quickly be utilized. Of course, Coal is a polluter, but this can be mitigated drastically with increasingly popular carbon-scrubbing technology. Pollution may be on the way out, but that does not mean coal is too, at least not for decades to come.

The short, medium and long-term outlook for coal is strong. In the short run, a shortage of met and thermal coal in Asia is boosting prices and demand. In the medium term (1-2 years), a decline in the production of natural gas is likely to boost thermal coal sales. If natural gas production is making its long-run peak, coal may even see a resurgence over the coming decade.

Of course, coal is generally politically unpopular, but fracking is too. At this point, technology constrains us to pick between the two. Due to this, I do not see the November election as a material long-term risk to coal.

In my opinion, Alliance Resource Partners is the best way to bet on coal. The company is extremely cheap and offers the most value without sacrificing extreme financial risk as is the case with smaller coal producers. I believe its dividend will be restored in 2021 (if not sooner) as the market stabilizes. The stock may continue to see negative volatility, but I’ll be buying the dips.

If you’re looking for (much) more research, I run the Conviction Dossier here on Seeking Alpha. The marketplace service provides an array of in-depth portfolios as well as weekly commodity and economic research reports. Additionally, we provide actionable investment and trade ideas designed to give you an edge on the crowd.

As an added benefit, we’re allowing each new member one exclusive pick where they can have us provide in-depth research on any company or ETF they’d like. You can learn about what we can do for you here.

Disclosure: I am/we are long ARLP. I wrote this article myself, and it expresses my own opinions. I am not receiving compensation for it (other than from Seeking Alpha). I have no business relationship with any company whose stock is mentioned in this article.